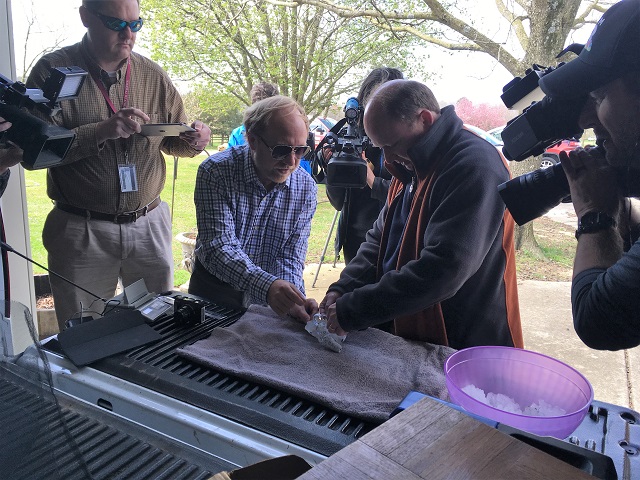 This would be the largest hailstone on record, east of the Mississippi River, at 5.25 inches. So that’s saying something. That’s a really, really large hailstone, for sure.”
– National Weather Service Huntsville Meteorologist in Charge, Christopher Darden

Editor’s note: The hailstone from Walter referred to in this article was collected by Cullman Tribune reporter W.C. Mann.

WALTER – Staff from the National Weather Service Huntsville (NWSH) office toured Cullman, Morgan and Marshall Counties Wednesday, surveying damage from the storms of March 19, mapping the track of a tornado across Morgan and northern Cullman Counties, and documenting the magnitude of Cullman’s hail storm. They even stopped for a few minutes in the Walter community to measure and weigh what might be the state’s largest recorded hailstone.

In Walter, NWSH Meteorologist in Charge Christopher Darden told The Tribune and multiple television news crews from Birmingham and Huntsville, “Right now, we’re still kind of going through the procedures of looking at the stone, but it looks like it would probably be the original initial record for the state of Alabama, in terms of largest hailstone.”

Alabama has no official record for hailstone size; few states do.  NWSH Senior Forecaster Andy Kula did do a search of the state’s hail database, though, and found that the largest stone recorded there was significantly smaller than the stone collected in Walter, which measured over 5 inches in diameter and 13.75 inches in circumference.  The stone weighed in at 8.9 ounces, more than half a pound.  Its impact created a 3-inch-deep divot in the front yard of the home where it was collected.

In a swath from Good Hope and south Cullman out to the eastern part of the county, hailstones routinely reported as tennis ball-, baseball- or even softball-sized tore up roofs and siding, smashed unsheltered vehicles and wrecked lawn and patio furniture.  Ground impacts from the large stones cratered lawns and spattered mud and debris 10 feet up building walls in places.  Local residents, initially relieved that Monday did not see a repeat of the April 2011 tornadoes, were stunned to discover what did happen.

This storm, according to NWSH, will likely be one for the history books.

“Certainly, for this part of the country,” said Darden, “this size hailstone is unusual.  You think of really, really large hail, giant hail–like baseball, softball hail, you think of the storms in the plains.  So, to see a hailstone the size of 5.25 inches in Alabama is probably unprecedented.  We don’t know exactly, because up to now we haven’t had a record of any large hail in the state of this size.  So is it possible that we’ve seen it in the past?  Maybe; it’s just not recorded.”

NWSH has been working with the state climatologist in Huntsville and the Climate Center in Ashville to establish the process for an official record.  Only two eastern states, Vermont and Illinois, currently recognize official hailstone size records, and the Walter stone beats both of their records.

According to Darden, who examined those records before coming to Cullman, “This would be the largest hailstone on record, east of the Mississippi River, at 5.25 inches.  So that’s saying something.  That’s a really, really large hailstone, for sure.”

This hailstone is not just a novelty, though.  Such a record becomes a tool in helping meteorologists and climatologists understand the magnitude of such storms.

When asked what it meant for understanding Cullman’s March 19 event, Darden responded, “In terms of the hail storm, it would probably be unprecedented.  I mean, we’ve already been into Cullman and seen the damage there in the city proper, and southeast of the city.  Talking to some of my colleagues that research hail storms, they even said it may be one of the top five hail storms of all time in the United States.  Certainly, for this part of the country, it’s pretty amazing; and even for the U.S., it may be somewhat unprecedented.”

Darden described Monday’s storm as a “supercell thunderstorm with tremendous updraft strength,” meaning that air was flowing upward through the storm cloud at a high enough velocity to hold small hailstones aloft long enough for them to grow large by collecting and freezing more moisture on their surfaces.  In the cases of the spiny stones seen at several places across Cullman County, there was opportunity for multiple stones to gather moisture at lower, warmer levels, then get blown upward where they clumped together as they froze at higher altitudes.  The longer the stones can stay aloft, the bigger they can get.  The size of the Walter stone and others examined or photographed in the area indicated that Monday’s storm could be among the most powerful in the region’s history, and maybe even that of the nation.

According to Darden, a colleague at the NOAA National Severe Storms Laboratory likened Monday’s event to the Mayfest hail storm that struck Ft. Worth and Tarrant County, Texas in 1995, injuring approximately 100 people with hail and killing 13 people with lightning and flash flooding.  That storm struck with little prior warning; north Alabamians heeded early warnings and took to shelters well ahead of Monday’s event, resulting in no deaths and only a few minor injuries reported to NWSH.

As of Wednesday morning, according to Darden, NWSH had identified six separate tornadoes that passed through its area of operation, including a single EF-1 that hit north Cullman County. Three more, including an EF-3 that hit Jacksonville State University, were reported in Alabama.

On the digital map that he spent the morning creating as the team surveyed the region, Darden showed a line beginning along Morgan County Highway 55 just west of Falkville and east of Alabama Highway 157, tracking southeast across I-65 and U.S. Highway 31 near the Lacon community.  The tornado weakened as it passed north of Vinemont and the airport, before crossing County Road 1442 near its crossing with the east fork of Flint Creek and terminating near County Road 1435 in the Providence community. Most of the damage observed during the NWSH survey consisted of broken or uprooted trees.

The NWSH investigation was ongoing when this story went to press.