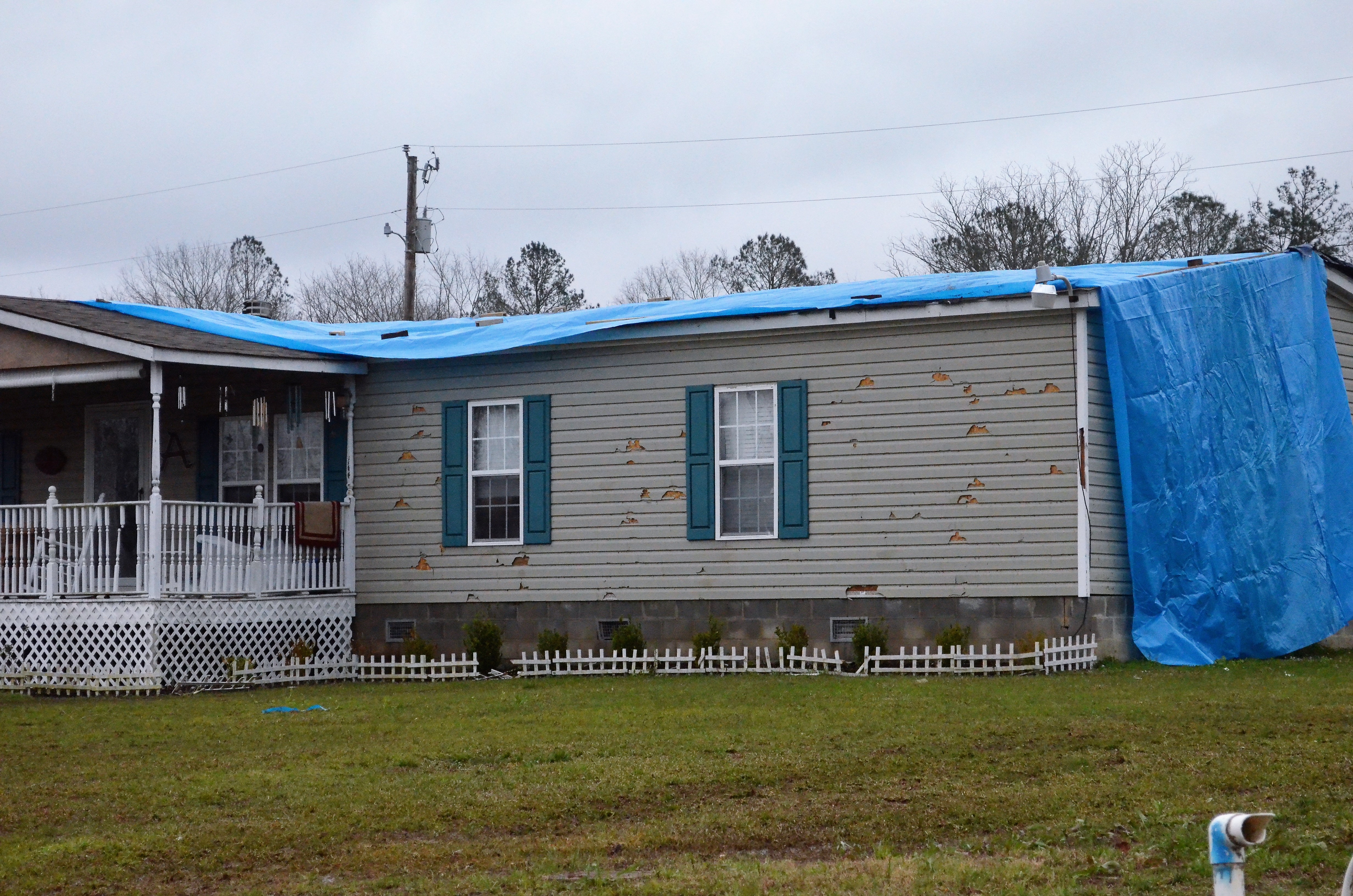 Busted windshields and vinyl siding, along with tarped roofs, are what a lot of residents and businesses are dealing with on the south side of Cullman following Monday night’s violent hail storm. / Nick Griffin

Denise McClendon, part of the Red Cross Disaster Action Team, has been on the ground since the storm came through Cullman working with her team to provide aid for the homes hit worst by the hail.

“What we do is we go back and look at how much damage there is. Red Cross will decide if there’s any long-term recovery that will go on or not, it just depends. We mainly, when it’s a large-scale event like this, focus on homes that are destroyed or have major damage and we really haven’t found that many of those. If we find those, we reach out to them to see how we can help them with their long-term recovery. We go out street to street and get the addresses of everything affected by the storm. Mostly what we’re seeing is roof damage and windows blown out,” said McClendon. “We also have a team that’s giving out tarps and some snacks. Not too many have major damage, but you put that on top of the cars they’ve lost it makes it a whole lot worse. Of course, (Tuesday) it was raining, too. There’s just a lot of bad roofs and windows out.”

McClendon said she has seen a lot of storm damage but is still surprised to see how hard some areas were hit.

McClendon continued, “I have never seen hail damage before; I’ve done all the storms, and this has really kind of blown my mind, just how much it did. I’ve never seen this kind of damage, in tornadoes you see a lot of wood and walls down, but this is just roofs. It’s really bad; I’m just surprised at the extent of it.”

Cullman County Emergency Management Agency (EMA) Director Phyllis Little and her staff were already working hard to prepare for the storm before it ever hit, but once the storm arrived, the night got much busier. Little spoke to The Tribune on Wednesday about what hundreds of homes went through Monday night and the damage that the EMA itself is dealing with.

“There were five of us down here working; we had a representative from the sheriff’s office and one from city fire and trying to monitor radios and take phone calls. It got very busy, very quickly, and in addition to that, when the storm actually passed over us, it got very loud in this bunker,” Little said. “The hail was so large, and it got so loud down here, even with us being totally underground with a whole other building over us, you could hardly talk to each other. There were seven vehicles sitting here around this building and only two of them survived; they were parked underneath a picnic canopy, that’s the only thing that saved them. The others had the windshields knocked out of them, two of them are probably going to be totaled. The other one, I don’t know, it’s got extensive damage, and then two water department trucks got extensive damage. The roof here has damage, can’t really tell how bad, we’ll have to get a roofer on it to look because it’s a metal roof, but it was just very eerie for a time and then it got very, very busy.”

The EMA spent most of Tuesday providing aid in the affected areas and starting to assess the damage. The process is still in its early stages so it’s difficult to determine a precise report, but the damage in the storm’s path is significant.

“I’ve never seen damage like this. If I see damage even similar to this with windows knocked out of things it’s usually because tree limbs had gone through it and this is not, this is just hail. So, I’ve never seen damage like this before and it goes from across the interstate around the Deer Trace subdivision, all the way through the east side of town in Fox Meadow, Carroll Acres, Arbor East and then out towards Welti,” Little said Wednesday.

“It’s pretty concentrated, we don’t have but a few reports of damage outside of this general area. Red Cross started yesterday doing damage assessments on residential damage, they’ll be back in today doing damage assessments and I’m waiting on their paperwork. As of yesterday, I know that we had at least seven mobile homes that were considered totally destroyed. I don’t know how many stick built homes yet and their report was just getting started yesterday, but there were at least 75 that they checked yesterday, and we’ve got three times that to do so they expect to come in this morning to start again and finish up some time today,” she said.

“The National Weather Service is actually coming to meet with a gentleman today, there was a picture posted on Facebook that showed a huge hail stone and the Weather Service is coming to meet with the gentleman who has that hail stone. It could be a record hail stone for the country. Hail here, we know was softball-sized. The National Weather Service will be in the county today. They’re meeting with the gentleman with the hail stone and they’re going to visit these areas and I’ll get their report either tonight or tomorrow. There have been several reports of funnel clouds; we have not found any damage that we can relate to tornadic-type weather. All of it has been hail.”

Little has seen hail damage in Cullman before, but even a couple days removed from the storm, she said it’s still hard to believe the destruction it caused.

“We actually have a picture where one of the guys went upstairs as soon as it quit and grabbed a couple and brought them down, so we know it was softball-sized here. It’s amazing just to look around now at grassy areas with the big divots in the ground; that’s amazing to me. I realized they were from the hail stones, and you just don’t expect that. As many years as I’ve been doing this I just really had never paid attention to that. It reminds me a lot of the storm we had in the mid-90s. We had a big hail storm that damaged vehicles at Mitch Smith (Chevrolet) and came across the south end of town. Porter Mills was still open at that time and it damaged cars in the lots at Porter Mills. It reminded me a lot of that, only worse.”