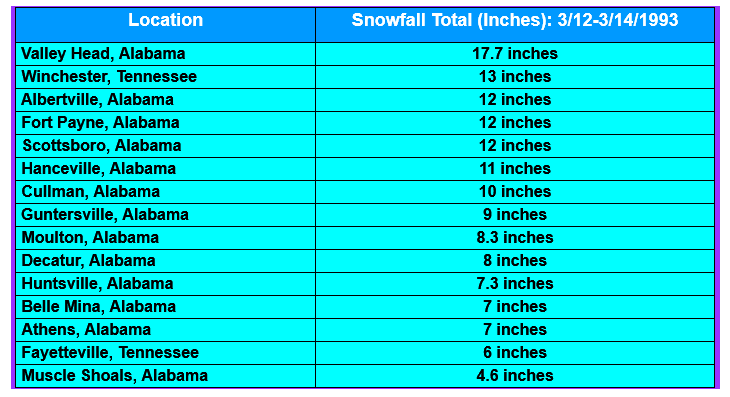 Here's how the National Weather Service in Huntsville recalls the event:

The March 12-14 1993 North American blizzard impacted north Alabama and southern middle Tennessee produced heavy snowfall and extreme societal impacts across the Tennessee Valley. Several snowfall records were set across Alabama and Tennessee from this event. This blizzard was also referred to as the "Storm of the Century" and/or the "1993 Superstorm" due to its large scale and widespread record-breaking snowfall it produced from the Northern Gulf Coast of Alabama and Florida, the chain of the Appalachians Mountains, and into the Northeast and New England.

The intense low pressure system formed in the Gulf of Mexico early on March 12 and pushed across southern Alabama and Georgia, before rapidly moving up the East Coast. At least 14 persons died in southern middle Tennessee and north Alabama, all due to exposure, and damage estimates in 1993 dollars exceeded $100 million. Of the 14 deaths, six people died after abandoning their vehicles, seven more died outside, and one person died at home. The weight of the snow combined with wind gusts in excess of 50 mph knocked out power, collapsed numerous roofs, and downed thousands of trees across the area.

At the height of the storm, over 400,000 residences were without electricity. In some locations, roads remained impassable for nearly a week, hampering emergency and relief efforts. Snow amounts ranged from greater than four inches in northwest Alabama to at or greater than a foot of snow in portions of the higher elevations of northeast Alabama and southern middle Tennessee. This powerful storm system would have been a category two on the Saffir-Simpson Hurricane intensity scale due to the strength of the winds. Following the storm, record cold invaded the area. The deep snow cover, combined with clear skies and light winds, dropped temperatures to single digits to near zero on the morning of March 14 across much of north Alabama and southern middle Tennessee. These unusually cold temperatures were around 35 degrees below normal for mid March.