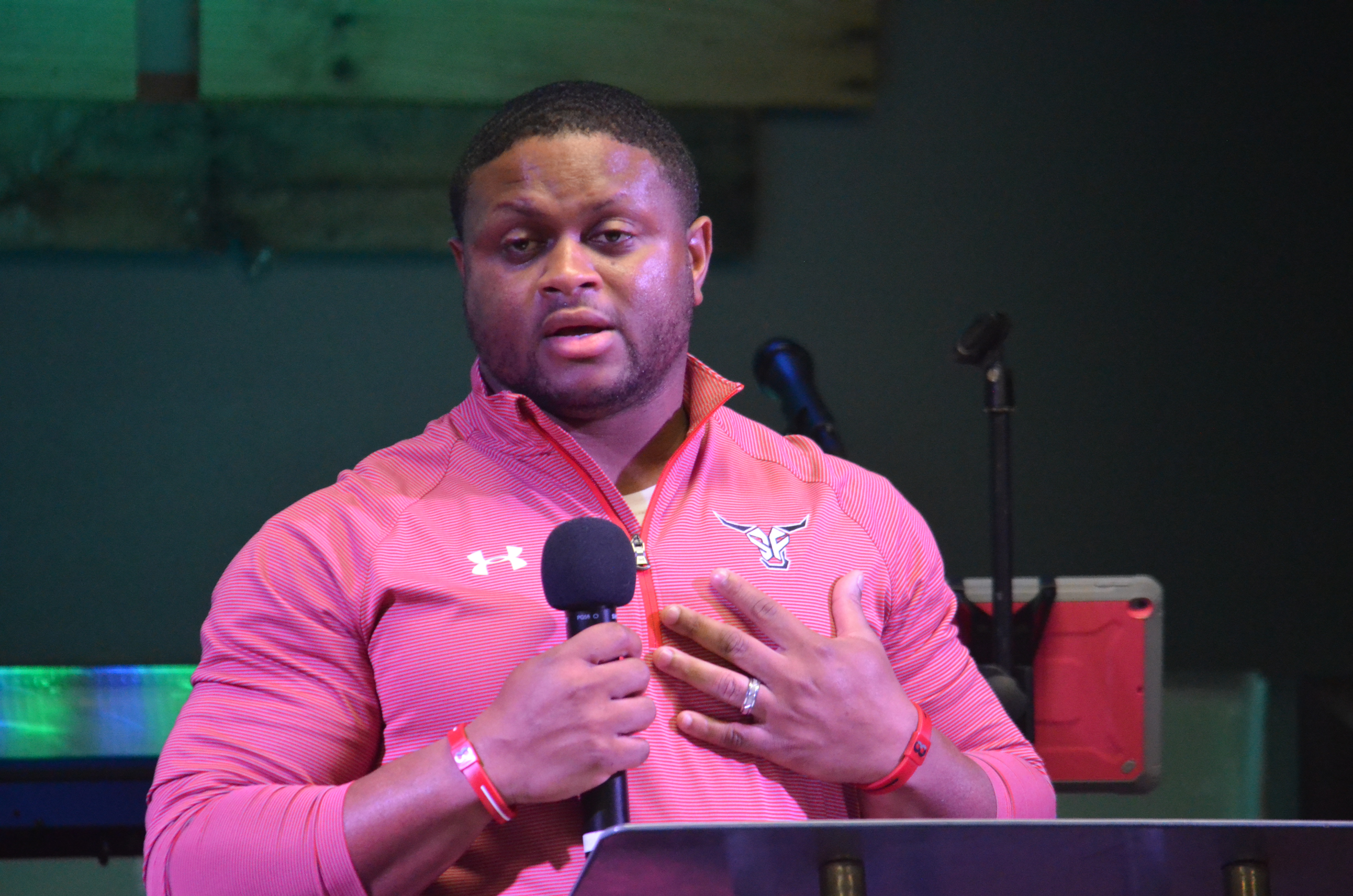 Most people know him for “The Catch,” in which he caught the ball behind the head of Southern Mississippi's Jasper Faulk on a long pass from quarterback Brodie Croyle on Sept. 10, 2005, or for his career-ending injury on Oct. 1 that same year, arguably the most gruesome sports injury in recent history. But Prothro came to Cullman to speak about his life, the challenges he has faced and how his faith ties into it all.

Before the service began, Prothro spoke to The Tribune about his message and gave some updates on what he’s doing now.

“(Pastor) Chris (Harrison) reached out to me and of course I know I have a story to tell,” he smiled. “Basically, I’m here to tell my story and give my testimony of how God has moved in my life with the things that I’ve been through and just being able to overcome adversity.”

Prothro was hired as an assistant football coach last summer at Spanish Fort High School and is currently working on his teaching certification so he can become a full-time member of the school’s faculty. He is excited to be able to spend time working with young people and believes he can teach them things that go beyond just football.

“It was a lot of fun just being able to be around the kids and being able to give knowledge to the younger guys. Not just about football but about life also, just kind of giving them advice and insight on things outside of football,” he said. “You know football’s going to be here, but at some point, it’s going to end, so having a back-up plan and just having an idea of what you want to do when football is not there anymore. I’m actually doing online classes at the University of West Alabama trying to get that teaching certification so I’m just trying to get that so that I can teach full time. Right now, I’m a sub at Spanish Fort High School and I coach football so I’m just enjoying my first year. We had an awesome year and we look forward to continuing to grow.”

As a former player and a coach, Prothro has seen the game change a lot since his time on the field in Tuscaloosa. Not only has the style of play changed, but he’s seen the development of young athletes evolve as well.

“It is a lot different now, but also the game is a lot faster. I think guys are a lot bigger and a lot faster than even back when I played. I was a 4.4 guy, but you had linebackers that were 230 running 4.4 and 4.5, but now you got guys like Jadeveon Clowney who’s 260-270 pounds and he’s running a 4.4,” Prothro said. “So, the game is evolving, guys are getting bigger, stronger, faster, and I think that speeds the game up. I also feel like back when I played our work ethic was a lot better than some guys nowadays. I think we knew the meaning of what it takes and hard work and stuff, but nevertheless, the game is so much faster now.”

Prothro had a connection to Cullman long before he spoke to Harrison through the Britts. He played with all three of the Britt brothers (Wesley, Justin and Taylor) at Alabama and through them he was made aware that Cullman is a big-time Crimson Tide town.

Prothro is already looking forward to next season on the sidelines for the Toros, especially considering their surprising 11-2 season in 2017.

“Just because we were young and lost 30 seniors the year before, a lot of people were expecting us to go about 6-6 and maybe not make the playoffs, but we had a lot of talent and our kids worked their butt off in the summer and it paid off during the season,” he said. “We ended up winning some games and had ourselves in a position to host a couple of games at home in the first and second round of the playoffs and then the third round we had to go to Wetumpka and ended up losing in the third round, but we had a great season. I think we overachieved to a lot of people’s standards that didn’t think we would do that well, so I feel like we had a great season. This year is supposed to be a lot better, because we’ve got a lot of talent coming back, so I’m just excited to see what this season has in store for us.”

Sunday’s service started at 11 a.m., and after musical performances and a few words from Harrison, Prothro took to the stage to begin his testimony. He began by talking about his childhood and how important his faith and his mother were for him during difficult times.

“My story begins with a little kid from Heflin, Alabama about 7 or 8 years old with a dream to play college football and a dream to one day make it to the NFL. One of my favorite verses of scripture, and one that I try to live by is Philippians 4:13 and it’s ‘I can do all things through Christ who strengthens me,’ and that’s one thing I try to live by from when I was playing even up till now,” Prothro said. “Each and every person in this room, at some point, whether it’s now or later, you’re going to go through something, you’re going to go through an adversity that you’re going to struggle to overcome and it’s one of those things you have to find a way to overcome.

“The thing about it is it’s how you deal with those adversities that determines the type of person you are. Throughout my life I’ve had to deal with all types of adversities. I’ve had to overcome two house fires, one in fifth grade and one in the 10th grade, and just think about that. You and your family having to pick up and rebuild your life all over again. We had to find a way to overcome that and another adversity I’ve gone through was living in a house with a single mother, a single mother of four and just going for months without power or water and just wondering as a kid where your next meal is coming from or how you’re going to take baths, and my mom being the strong, Christian woman she is, she always found a way.”

Prothro went on to talk about his struggles academically and how his faith helped him overcome that challenge and then began to reflect on his struggles in college after his injury held him back from fulfilling a lot of his goals.

“Going into that Florida game, it was something about that day, I just felt different. I felt good and I felt like it was one of those days that it was going to be a special day for me. I went about my business during pre-game warmups, nobody was goofing off and it was one of those days that everybody just wanted to take care of business,” he said.

“Long story short, I ended up having like seven receptions, 134 yards, two touchdowns, and I had a punt return that I ran back for a touchdown, so I tell a lot of people that Florida game was the best game of my career and also it was the worst game of my career. On Oct. 1, 2005, with 8:57 on the clock, I ended up breaking both bones in my leg and was never able to come back and play again,” he shared.

“I went through numerous surgeries and I just found myself sitting in a hospital bed and my mom actually happened to come to that game. I wanted her to come to that game. Like I said I felt good and I just felt different about that game. So, she ended up staying in the hospital with me and I can just remember nights laying in the hospital bed with my mom sitting right beside me and she could hear me crying at night and would turn the light on and just looking at all the things that people sent me in my room, I found myself asking God, ‘Why me?’ How do you allow me to be this high and then all of a sudden to take it all away like that?

“I found myself looking back on a promise I made God in high school. Somewhere along the line of my sophomore year and junior year with my jersey being in the stores and people knowing who I am, I lost track of God. I feel like God took something that I love so much to really show me that he’s in control. It wasn’t necessarily that I was out there doing whatever it was, just that I fell back on my promise to God. Maybe I wasn’t going to church as much as I should’ve and like I was going before when I couldn’t pass that test in high school. Somewhere along the line I stopped doing that, and I feel like that was God’s way of showing me that he was in control and to remind me of the promise I made to him.”

Despite all of the struggles and pain that Prothro has been through, looking back on it, he said he wouldn’t change anything. The path that he is on has led him to wife his Sidni and his son London, who made the trip to Cullman with him Sunday morning, along with his sister Azaria.

He ended his testimony with a message for everyone in the congregation. A message that he believes we should live our lives by and will guide us through hardships that we will all face in life.

“We all experience times of adversity in our lifetime, and as the saying goes, what doesn’t kill us makes us stronger. Turn to God and his words during times of adversity for strength and comfort. When we put our faith in him, he will help guide us to the path of happiness and peace. Thank you and Roll Tide!”