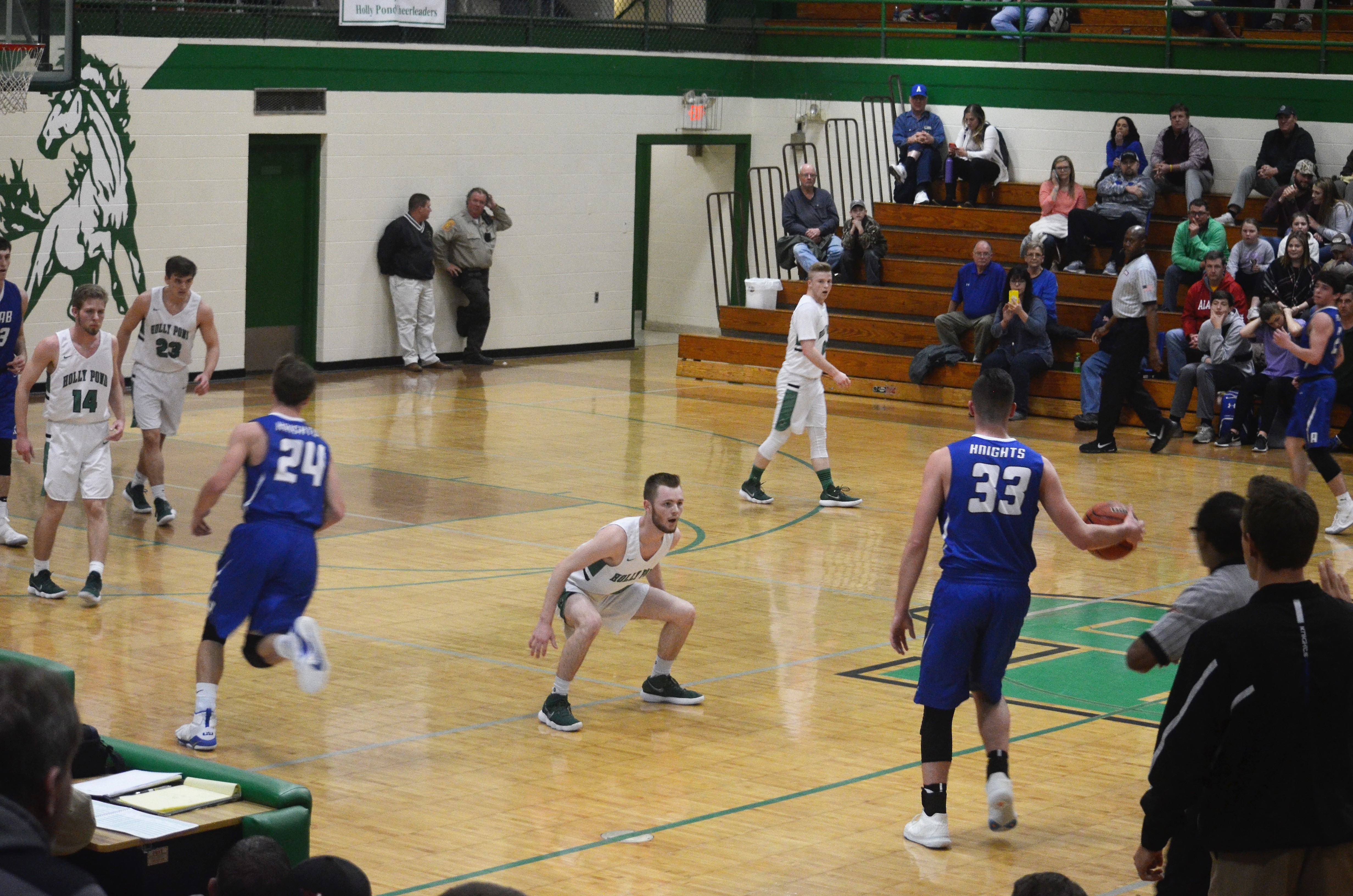 The youngest group of Lady Broncos was in control of Tuesday evening’s first game from the opening tip. Arab trailed 19-10 to start the second half and wasn’t able to narrow the gap in the second thanks to the defense and shooting of Holly Pond. The Lady Broncos got good performances from guard Tate Duke and forward Sarah Finley on the offensive end. Finley finished with 11 points and seven rebounds while Duke led all scorers with 12 points. All of Duke’s points come from four shots beyond the arc, including two in the fourth quarter that put the game away for Holly Pond.

Arab’s Aaliyah Hardin led the way for the Lady Knights with seven points and five rebounds, but they could not come up with enough offense to keep pace with Holly Pond in the second half. Lady Broncos’ guard Kennedy Twilley was a problem on the defensive end for Arab. Twilley led the game with three steals to go along with four points and three rebounds.

The Broncos dropped game two of the night in a tight matchup that went down to the wire. Holly Pond put together a 43-32 lead over Arab at the end of the third quarter, but the Knights’ offense exploded in the fourth quarter on the way to the Knights’ come-from-behind victory.

Arab started the fourth quarter with a 12-0 scoring run to take the lead due in large part to two quick 3-pointers from John York. York finished with a game-high 18 points, 12 of them coming in the final frame. There were a couple of lead changes within the final minute of play, starting with a layup from Jacob Ring that put Holly Pond back up 51-49. Ring finished with a double-double performance in the game, putting up 13 points and pulling down 11 rebounds in the loss.

Arab immediately answered back with a 3-point basket from Caleb Isbell to go up 52-51 with 40 seconds remaining. The Knights got a couple of stops on defense and went up three thanks to two free throws from York with 14 seconds to play. Holly Pond got the final possession and a chance to tie the game but couldn’t get a shot off before time expired.

Arab was able to beat Holly Pond on the boards throughout the game thanks in large part to forward Wilson Walker. Walker led the game with 15 rebounds and also scored 17 in the comeback.

Turnovers plagued the Lady Broncos in their game against Arab Tuesday night. The Lady Knights generated 18 steals in the game, 11 of which came from guard Lauren Watson. Watson gave the backcourt of Holly Pond headaches all night, leading the game in steals and scoring 16 points to lead all scorers as well. Watson came up just a couple rebounds short of finishing the night with a triple-double performance.

After trailing by just five points at the half, Holly Pond couldn’t cut into the Lady Knights’ lead despite eight points from forward Elizabeth Miller and six points from both MaKenna Folds and Maddie Heatherly.

The Lady Broncos were solid on the defensive end for most of the night but could not overcome their turnovers. The steals from Arab limited Holly Pond’s possessions in both halves, making it difficult for the Lady Broncos to get into a rhythm on offense.

The Lady Broncos will try to bounce back and get things going offensively when they host West Point on Feb. 2 for the regular season finale.

The Holly Pond Broncos won in dramatic fashion over Arab in Tuesday night’s final matchup. After missing the front end of two “one and ones” at the free-throw line late in the fourth quarter, Broncos’ guard Zach Shaw tasted redemption when he knocked down a deep shot at the buzzer to down the Knights. With the game tied at 54 and less than two minutes to play, the tension in the building was high and the Knights seemed to have forced overtime when guard Colby King laid one in with eight seconds remaining to tie it up at 56. Broncos head coach Mitch Morris opted not to call a timeout and Shaw was able to get a decent look at the basket in the final seconds while the Knights were still in transition.

The game was tight from the opening tip, with neither team stretching a lead beyond single digits for all four quarters. It was Shaw who had the shot of the game, but Broncos’ forward Kyler Chaney and guard Jake Harris led the way for Holly Pond offensively. Chaney led all scorers with 16 points, hitting four shots from beyond the arc, and Garrett knocked down another three deep shots, finishing with 12. Forward Sam Graves was the go-to man for the Knights, leading the team with 14 points and pulling down five rebounds.

The Broncos will try to ride the momentum of Tuesday night’s emotional victory into the regular season finale against West Point Feb. 2.

‘No mountain is too tall to climb’: Andrew Lynn looks back on his West Point years