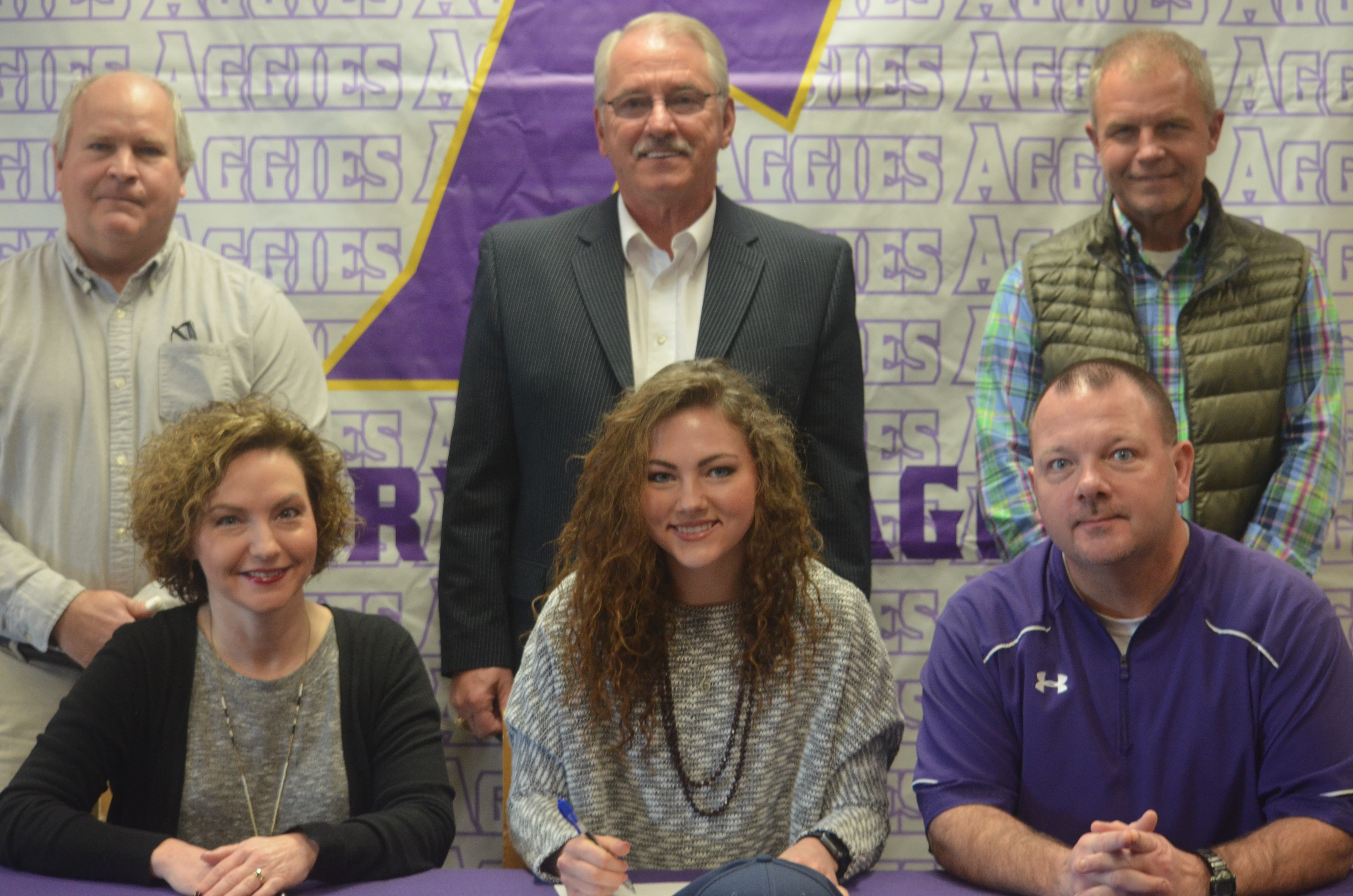 FAIRVIEW – Monday morning was a busy one at Fairview High School as parents, grandparents, coaches and dozens of students gathered in the library to celebrate two student-athletes signing scholarships. Hunter McKelvy and Alex McDonald each signed athletic scholarships from Wallace State Community College, Hunter for golf and Alex for cross country. McKelvy and McDonald wanted as many of their teammates and friends at the signing as they could fit into the library, so it made for a fun atmosphere during the ceremony.

McKelvy was up first and after signing his scholarship he talked a little about his time at Fairview and how his coaches have prepared him to compete at the next level. He’s also very familiar with the coaches he’ll be working with thanks to his ties to the local golf community.

“They’ve worked with me a lot, Coach (Kurt) Knight and Steven (DeBoer) and Ches (Harris) and Coach (Dan) York have helped me out a lot, too and just studied hard and worked at,” McKelvy said. “I work at Cross Creek Golf Course so I’m around Ches and Coach York just about every day and they really encourage me to be better and strive. I couldn’t be more thankful for the blessing that God has sent me and my family.”

His head coach at Fairview, Kurt Knight, reflected on McKelvy’s time at Fairview and how he has seen his skills develop from his freshman season to today.

“Well he’s growing and getting longer off the tee because he’s stronger and he’s more of a leader, of course he’s always been a leader. He’s been a great person and worked hard, I mean he’s been doing it non-stop since the first day really,” Knight said. “Before he was even able to play with us he was always around, but the biggest thing is length and consistency. Length and consistency I would say is the biggest difference.”

Coach Knight has been really happy to see how close the golfing community is in Cullman and believes it has been a great help to himself and McKelvy.

“Coach York and Coach Harris and Steven and everybody it’s kind of like a big family. We go there and practice one day a week and they help us, and it’s just been a great group and we’ve been like that for a while so we’re really proud to be able to associate with great people,” Knight said. “We’ve all worked together; Steven has had him for a long time, since 10th grade, so I mean everybody’s worked together to help and he’s done all of it on his own, but everybody’s worked together to help get everybody where we want them to be. We would like to thank Coach Harris, Coach York and Steven DeBoer, our swing coach, along with Cary Craig at Chesley Oaks for all of the support.”

Wallace State head golf coach Dan York touched on some of the good things that he sees in McKelvy and some areas that he looks forward to improving with him.

“Being a local young man like he is, I’ve known Hunter for several years. The thing that has really impressed me, not only is he an outstanding young man, but his work ethic,” York said. “He’s a very hard worker and you can just continue to see him improve each and every year so it’s a great opportunity for us to offer a local young man an opportunity to continue his education and represent Wallace State on the golf course; we’re excited about it. It’s a maturing process, it’s learning how to play the golf course. Typically, you’re going to get longer as you get older because you get stronger, but yes, he’s spent a lot of time on his short game and in reality that’s 75 percent of your strokes are from 100 yards in, so I’m excited that his short game is getting better and better also.”

One of Hunter’s coaches at Fairview also happens to be his father, Mark McKelvy. His challenges as a coach are a little different than his colleagues’ as he has to balance coaching and parenting on the golf course. The elder McKelvy hasn’t had any difficulties playing both roles and credits a lot of that to his son.

“It hasn’t been a problem. Hunter’s always worked hard, and I’ve never had any problems with him so he’s good enough that I can just let him do what he wants to do, and I can spend my time working with a lot of the other kids. That way there’s not a big conflict between me and him and I just kind of let him do his own thing; if he needs help he’ll ask for it and I’ll help him.”

Mark McKelvy has proudly watched as a coach and a parent as his son’s skills have developed over the years and earned him the opportunity to compete at the next level.

“It’s really unreal the way he’s grown because he didn’t start playing until he was in seventh grade and I think the first round he went out and shot like 130 or something,” Mark McKelvy said. “Then he just started working and it seemed like every season he was dropping 10-15 strokes and he got to where he’s shooting in the high 60s and low 70s now, so he’s just worked real hard and had good people- Steven DeBoer, Coach Ches Harris gave him lessons- and he’s just worked hard and had good people working with him to help get him to this point.”

Alex McDonald was up next and with her came a whole new crowd of friends, family and coaches. McDonald said feels like Fairview High School and her coaches have been a big part of her preparation, but she also believes self-motivation may be even more important.

“It’s prepared me a lot. I mean our coaches run us a lot, but I feel like training on my own, a lot of it is self-motivation and my dad really helps motivate me too. I guess I just want to make him proud,” she said.

McDonald said she values her relationships with her teammates more than anything and believes that might be what draws her to compete in team sports.

“I’m going to remember the team more than anything,” she said. “Just being with them, I love having them here. I look forward the most about having a team, I love that. That’s probably the thing I would miss the most about not running.”

Wallace State Cross Country Coach Stan Narewski was in attendance and talked about the qualities that he sees in McDonald that excite him the most as a coach.

“Tony Crider and I have seen her race several times and maybe the most impressive thing was her focus. She ran in a race earlier this year and a yellow jacket stung her on the ear I believe and that hurt like fire and she never slowed up, she competed, it was just a momentary distraction and she got back on task and when she got through she was hurting,” Narewski said. “Number one, to run that fast you’re tough, but to run that fast after a yellow jacket has stung you, she’s pretty tough. She is not afraid to work, she’s a hard worker and she just wasn’t sold on the idea of running to begin with, and I think she thought about that team thing. About what the team meant to her, what being in a program meant to her and I think something I said to her, and this applies to all these folks, I said if you come to college and run, for the rest of your life you will be categorized as a college athlete and that makes a difference in life. It gives you confidence; people sometimes will sit up and take notice because you did everything they did and you ran 50 miles a week and that separates you from the pack.”

Narewski is very familiar with Fairview’s program and the community. He is always excited to be able to bring in young men and women from a community that he believes produces great people, and he may already have another Aggie on his radar.

“It’s a great family, great school; you know we’ve got Jacob (Guthrie) at our place and in fact my first signee from Fairview was Coach (Hobson) Hite’s daughter, Tracy Hite, and it’s just like family, and to have another Fairview athlete I think is important. I won’t say who, but we’re already interested in another one here, so we hope we can continue to get some good athletes. They seem to produce them; these guys like to run, and they’re prepared. They don’t just run them and don’t know anything; they prepare these kids to race and understand what they’re doing, not just blind mileage, so we like that, it makes them easy to coach. When we get a person from Fairview they’re good people because they won’t keep knuckle heads around, and I like that. You get somebody from here, they’re a quality person. I sure like the coaches here, they’re good people. I’m always happy to see the Fairview staff at meets.”

Like McKelvy, McDonald has a parent working with her in athletics. Her father, Ricky McDonald, is the head coach for the Lady Aggies Cross Country program, and like McKelvy’s father Mark McKelvy, Ricky McDonald said his child made it easy on him as a coach.

“She made it easy; she’s real self-motivated so I didn’t necessarily have to push her as hard as sometimes you might have to,” Ricky McDonald said. “She made it easy, she led by example a lot; she’s a great kid at home and of course she’s a great athlete to coach too, so it was good all the way around for her.”

Ricky McDonald is excited to see his daughter move on to a program that he has a lot of respect for and expects her and the program to thrive in the coming years.

“To me the quality of the guys that are there, Coach Crider and Coach Narewski, that was one of the determining factors about us deciding to go that route is that we trust those guys,” Ricky McDonald said. “The success has always been there with Coach Narewski and the character that they have. There are not a whole lot of things you can improve on with what these guys can do, so we’re excited about the program coming back and we’re excited about where it’s going because we really think it’s going to be successful, big time.”