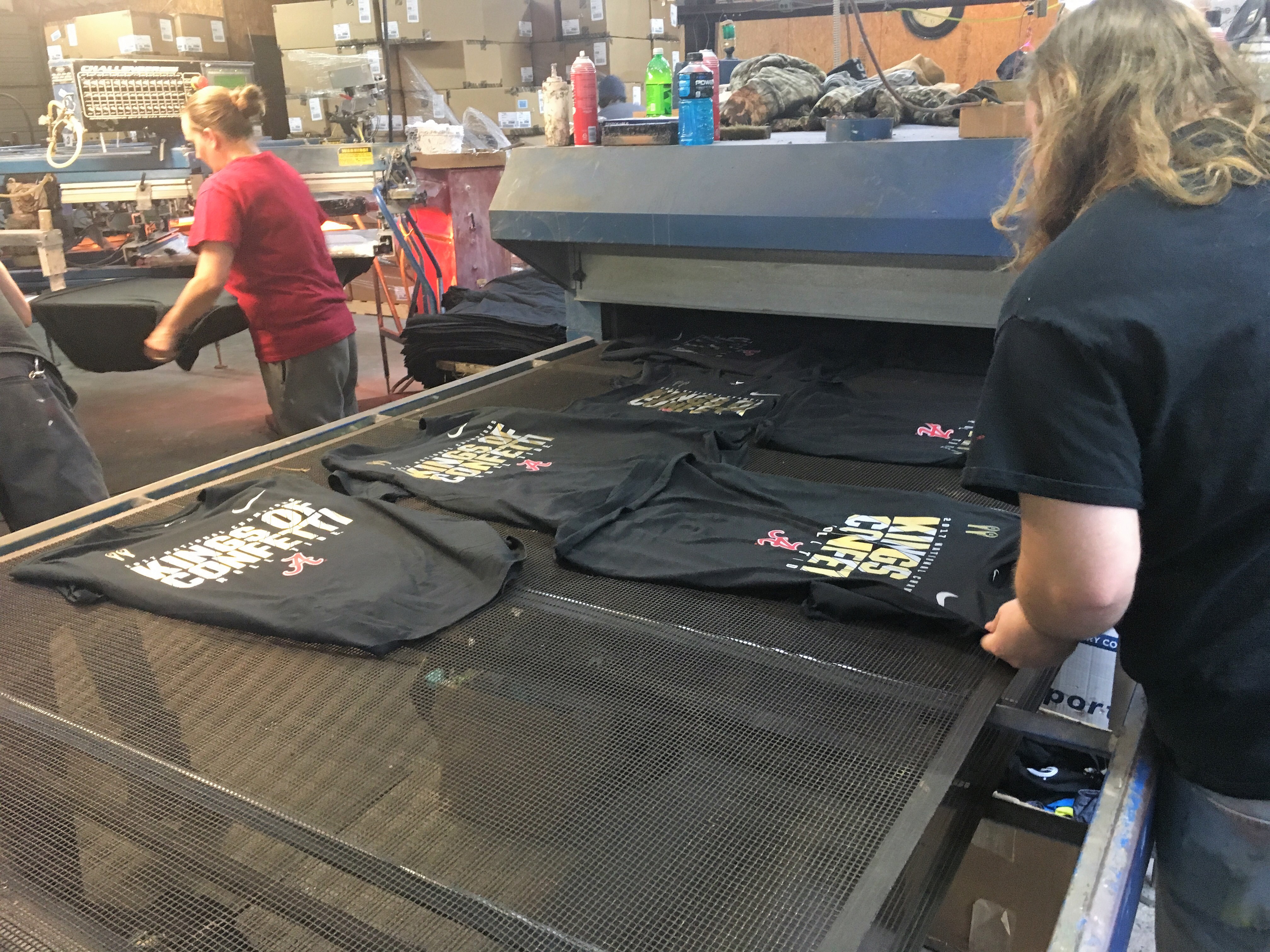 HANCEVILLE – National championship games almost always mean busy nights for the crew of about 30 at Creative Design, and 2018 started off no differently for the Hanceville print shop. Whenever the Alabama Crimson Tide or the Auburn Tigers play their way into the title game, printing the championship T-shirts is an all-night affair. Monday night, the shop was set to print for the Tide or the Georgia Bulldogs, depending on the outcome. When Bama pulled it off in OT, 26-23, Creative Design sprang into action, producing 15,000 shirts to be quickly delivered to stores and into the hands of ecstatic fans.

Owner Mike Pitts has been involved in printing for more than 30 years and has worked through a lot of championship nights, but after last year year’s title game against Clemson, went home empty-handed.

“Alabama has made it to the playoffs all four years and we had to go home early and cut the lights off here last year after the last second of the game and didn’t get to print anything,” Pitts said. “This year we’re fortunate enough that we’re going to get to print some shirts if either team wins. It’s a lot more shirts and it’s a lot more fun for me if Alabama wins because I’m an Alabama fan, but rather than turn the lights off and go home we can tear our press down and set back up and print Georgia shirts. You know I’m a fan first, but business is business and here in January it’s work, and it pays good, so we’ll do what we go to do.”

Alabama’s long run of success under Nick Saban has been great for Pitts to enjoy as a fan, but it spills over into business as well. Since 2009, there have been a lot of chances for Tide fans to head out and grab a championship shirt to celebrate their team.

Pitts and his staff have made a tradition of putting together a full spread of food and set up chairs to watch the championship game together. That food usually gets eaten throughout the early part of the morning, however, due to the late nights printing shirts. This year’s championship guaranteed a late night for the crew.

“We gather, and we watch the game and we always make sure to have plenty to eat because when we start printing, we don’t stop until we’re done,” Pitts said. “We’ll work all night until they’re done.”

Pitts said Creative Design would print 15,000 shirts after Bama’s win. If Georgia had won, it would have been 6,000, plus potential reorders.

“Because Georgia has not been in the race in a long time, their sales are going through the roof,” he said. “Alabama has been there so much that it’s not as exciting and it’s become more expected. Two years ago, the last time they won, we ran right at 23,000 shirts in about 18 hours. We actually started before the game started so we started about five o’clock that Monday afternoon and finished about 11 o’clock Tuesday morning. So that’s why we always make sure to have plenty here to eat to get us through the night.”

Pitts and his staff have had a lot of practice printing through championship nights over the last nine years and have developed a smooth process for producing the shirts. They’ve even had some of their designs make their way up the chain at Nike.

“We print and once they’re printed we’ll pre-pack. There’s so many of each size that goes together in a box and then everything gets shipped out of here. There are a couple other printers that will be printing like we are. Right now, we’ve got the majority and all their stuff will come here and everything will ship from here,” he shared. “We had to do samples earlier this week and send them in prior for approval for today to make sure we could do what they (Nike) wanted at the quality that they wanted. They sent me the sample of a standard to go by and I gave them a call and told them mine’s got metallic gold and will be brighter and shinier than theirs and I asked if that was OK. I sent them a picture and they thought it was so good that they got rid of their sample going to the other printers and sent mine to two different people and told them it was the new standard and to match it. They loved what we did as far as print quality, so that made me feel good, we’ve got a really good relationship with these people and they love what we do because we always provide good quality and good service.”