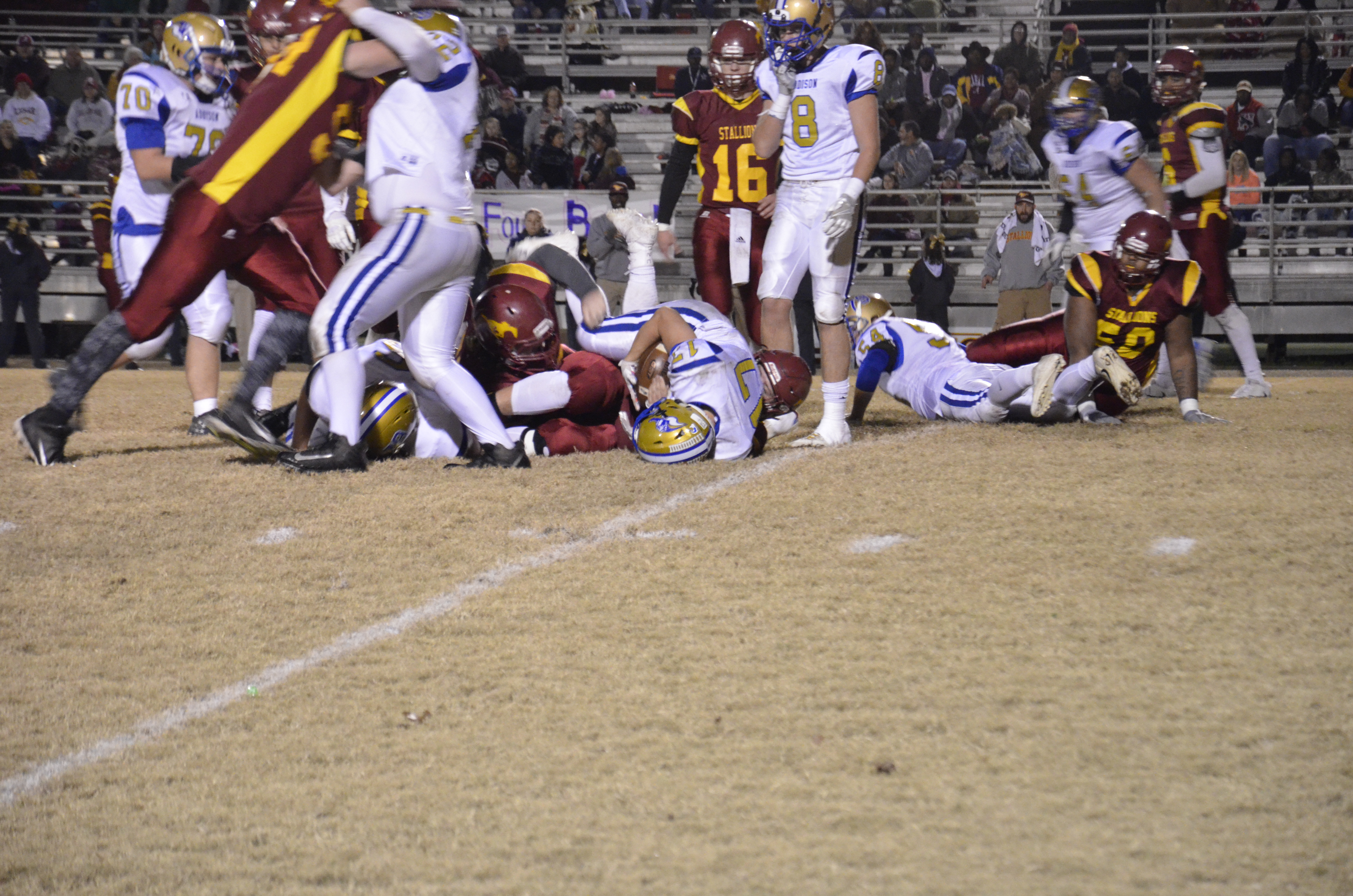 MILLPORT – Addison ran into a buzzsaw Friday night in the form of the South Lamar Stallions in a 34-20 season-ending loss.

After swapping punts with the Addison Bulldogs, the Stallions put together an impressive 11-play drive that was led by Herachio Washington and Buster Griffin, who combined for nine carries and 43 yards, but on third-and-goal from the Addison 11, the Stallions took to the air and Addison made them pay when Zayne Guthrie picked off the pass at the goal line and returned it to the Addison 16.

It did not take Addison to capitalize on the turnover, thanks to a 26-yard rush from Tyler Borden that put the Stallions on their heels long enough for Guthrie to connect with Colton Chambers for a 48-yard pitch and catch for a touchdown. Addison did not convert the 2-point try, taking a 6-0 lead.

South Lamar started its next possession from its own 25 and went on the move, with Washington and Griffin chewing up yards down to the Addison 45 at the end of the first.

Starting the second quarter with a third-and-1, quarterback Jack Dowdle kept the ball himself for 12 yards and the first down. On the next play, Dowdle connected with Jarrett Bryant for 39 yards and a first-and-goal from the 1. Dowdle called his number on the very next play, scoring from 1 yard out. The PAT was good and South Lamar took a 7-6 lead, a lead they never lost.

Addison’s next drive ended in an interception and South Lamar went right back to work. From their own 24, the Stallions covered 76 yards and capped the drive with a 37-yard touchdown run by Washington. The PAT was booted through the uprights for a 14-6 lead.

The Stallions added another touchdown late in the half when Washington got South Lamar in position for Dowdle to carry the ball from 1 yard out for the second time in the half. The PAT was good, and the Stallions took a 21-6 lead to the half.

Addison got the ball to start the second half, but the drive ended in an interception. The Stallions could do nothing with it, however, and were forced to punt the ball right back to Addison.

The Bulldogs started the drive from their own 13. After going backward on the first play of the drive, Guthrie found a seam and busted up the middle for an 81-yard touchdown run. The 2-point conversion was good and Addison pulled to within seven, 21-14.

South Lamar looked for a little breathing room on its next possession and got it in the form of a 54-yard scamper for a touchdown by Griffin. The PAT made the score 28-14.

Addison answered the Stallions’ score in the opening minutes of the fourth with a 4-yard touchdown pass from Guthrie to Logan Wilkins. The PAT was missed, and the score stood at 28-20.

South Lamar effectively put the game away on its next drive with a 3-yard touchdown from Washington. The 2-point conversion failed, and the score stood at 34-20, where it remained, as the Stallions move on to the fourth round of the 2017 AHSAA 1A state football playoffs.