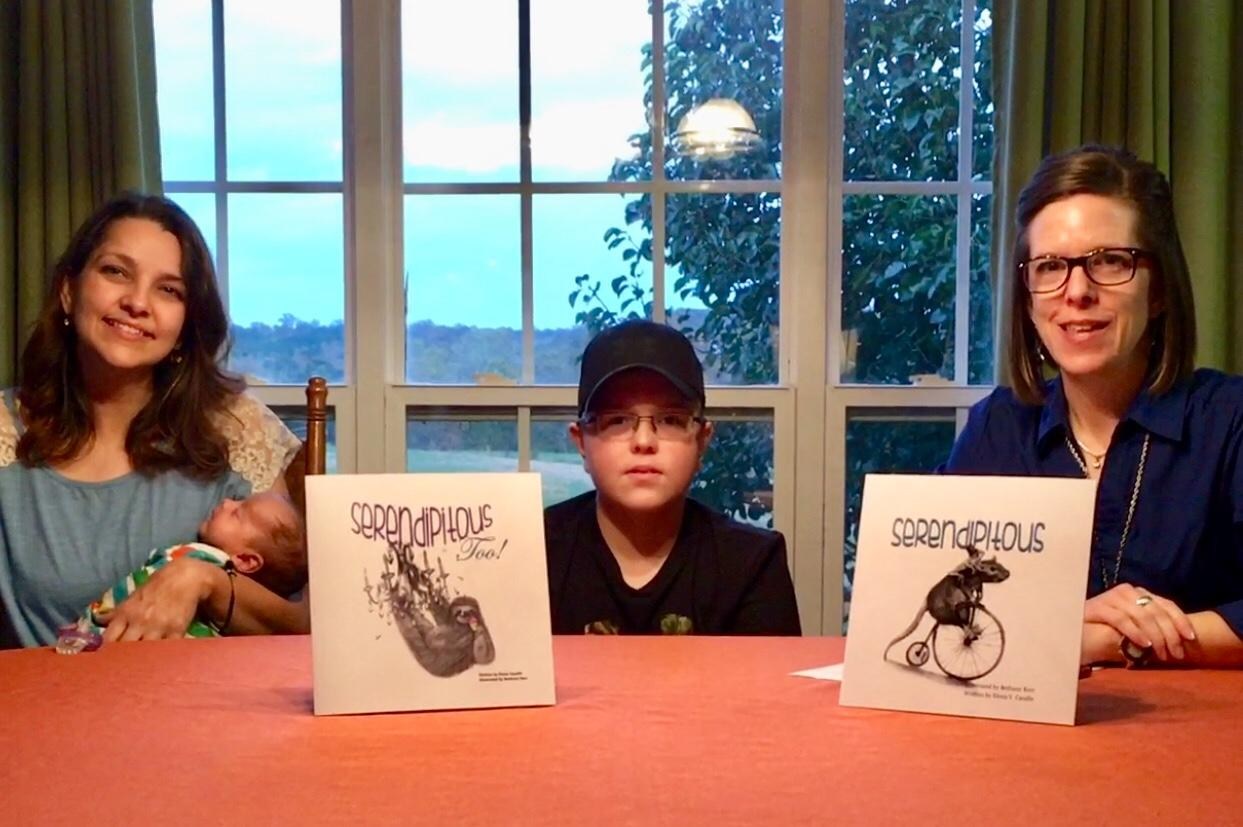 L-R: Bethany Kerr, Levi Bates and Elena Caudle hope that “Serendipitous Too!” will bring Christmas cheer to even more patients than their successful first effort.  On Dec. 20, Bates hopes to carry 525 copies of the book to the children at Children's of Alabama. / Photo courtesy of Elena Caudle.

CULLMAN – When poet and author Elena Caudle commented to the owner of a van with a whimsical paint job at a downtown Cullman business, she had no idea where that exchange would lead her: to two collaborative book projects (with more in the works) and a recurring role bringing Christmas cheer to patients at Children’s of Alabama.

Caudle shared, “Our artist and mother of eight, Bethany Kerr, and I have known each other for years, and happy accidents-serendipity-have become the norm with us.  We were first introduced when I saw and commented on her crazy little bus that was painted to look like a shark.  She needed a bus for all those kids.  Coincidentally, the vehicle I was driving was an Xterra that sported a wrap that looked like a giant zipper!  Bottom line, we both march to our own beat.

“After that, we soon realized that our personalities, talents and hobbies, while not the same, complemented each other so well, and we became friends and have been blessed in the years since to work together on projects ranging from weddings, to photo shoots and now children’s books!

A spur-of-the-moment sketch by Kerr turned into something special.

“Last fall, 2016, in an attempt to fight a bad case of ballgame boredom, Bethany drew a whimsical picture of a rat and a toad riding an old fashioned big wheeled bike,” Caudle shared. “I love her work anyway, but for some reason this one especially caught my heart and eye!  And with it came an idea for a great gift, so I asked her to draw a picture to go with a poem I’d written years ago for and with my sister.  She did a perfect job, but then, she wanted to read my story/poem, and she thought it was the perfect complement to her picture, to which I jokingly responded, ‘I tell you what, I’ll write a story for every picture you do!’  Evidently, it sounded so good to both of us that we decided to see what we could do!  Twenty-four critters and their stories later, we’ve got two books published-self-published-and there’s a third one in the works, and we are having a total blast!”

After they got their first book, titled “Serendipitous,” to press, Caudle and Kerr decided to use it to make a difference in someone else’s life, a lot of someone else’s, in fact.  Their plan was to donate 50 copies to patients at Children’s of Alabama hospital in Birmingham, and donate some of the proceeds from book sales to the American Cancer Society’s Relay for Life.  (See http://qrne.ws/serendipitous.)

Then came Levi Bates, a 13-year-old cancer survivor and veteran of years of treatment at Children’s.

Caudle explained, “Because we were having so much fun, the books were so well-received and we both have a need to give back, we decided then to have our first book drive for Children’s Hospital.  Here’s where Levi came in.  I met Levi a couple years ago, and from the moment I met him, I knew that he was special, not just because of the amazing strength and courage he’s had to develop and display while fighting cancer and the challenges of a bone marrow transplant, but because he’s just an all-around sweet, big-smiling, kind-hearted, generous young man from the get-go.

“Levi asked to be a part of the book drive last year and immediately upped our initial goal from 50 to 250.  And with his call to arms and the generosity of this amazing community in which we live, we wound up donating 350-plus books to the kids who spent Christmas in the hospital in 2016!”

This year Caudle and Kerr collaborated again to produce “Serendipitous Too!” to answer such questions as:

–How do you help a mongoose get over his fear of dentists?

–What’s it like to be a hippo in space?

–Why would a porcupine sell balloons?

The now 14-year-old Bates turned the duo into a trio once again for the second annual “Serendipitous and Levi Bates Book Drive” for Children’s Hospital.  The team will accept monetary donations to distribute copies of the book at Children’s and UAB Hospital.  Bates has really stepped things up with an ambitious goal of 525 books, to make sure enough copies are donated for:

For each $10 donation, one book (cover price is $15) will be donated to the book drive.  Anyone who donates $100 will have 10 books donated and will receive a free book, which can either be kept by the donor or given to the book drive.  There will be donation stickers in each book with the donor’s name so, according to Caudle, “each recipient will know that someone real was thinking of them.”

Caudle, Kerr and Bates plan to deliver the books to both Children’s and the UAB High Risk Maternity Ward on Dec. 20.  They will accept late donations, but they hope to have as many donations made by Dec. 16 as possible.

Kerr herself is no stranger to Children’s of Alabama.  She stated that she is excited to reprise the project “because I have such an appreciation for Children's Hospital, especially since this year I've had my children there twice and they were so well taken care of!”

Bates wanted to be part of the donation project and to make it bigger, “because I know personally how much even the smallest thing can mean when you’re in a place like Children’s and facing pain, and you don’t know what might happen next.  So I want to take as many smiles to as many kids as we can!  They need as many smiles as they can get!”

“And as far as we’re concerned,” added Caudle, “it would be hard to find any better reason than that, to do something as easy as this!”

For more information, or to donate to the Serendipitous and Levi Bates Book Drive for Children’s Hospital, visit www.joyfulaccidents.com/bookdrive.html, or on Facebook at www.facebook.com/Serendipitousness/.   Phone B.E. Blessed Publications at 256-338-0223 or email Joyfulaccidents@gmail.com.