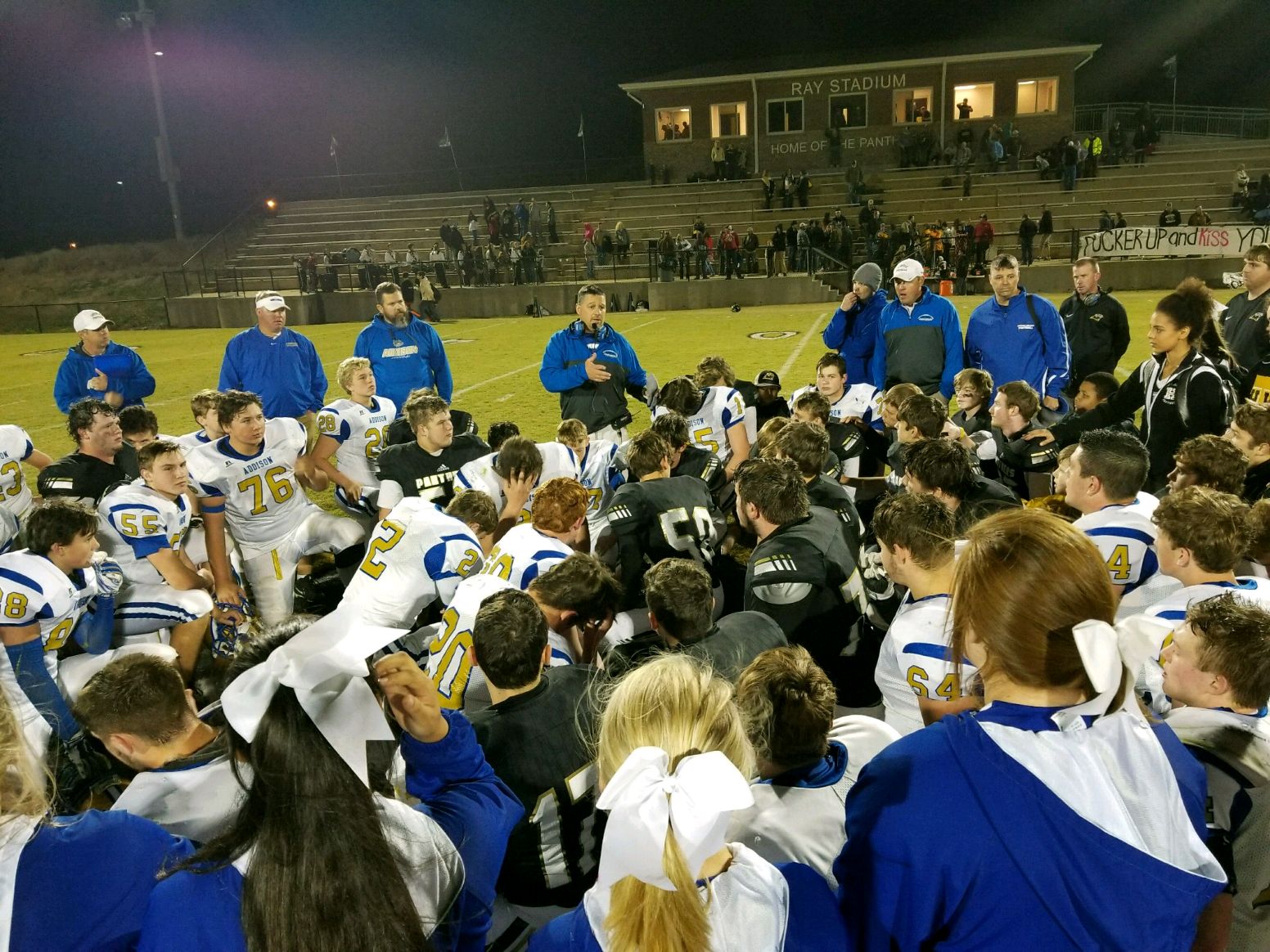 Both teams come together after Friday night's game. / Josh McBrayer

HACKLEBURG – The second round of the AHSAA 1A state playoffs was a hard-nosed, hard-hitting contest. Addison dug in deep and came away with the 41-16 victory over Hackleburg.

Like they have so many times this season, the Addison Bulldogs got on the board first thanks to an opening drive touchdown by workhorse Ben Robinson, who carried the ball in from 1 yard out on third-and-goal. The Bulldogs converted the 2-point try, taking seven minutes off the clock and earning an 8-0 lead.

With Addison milking most of the first quarter clock, Hackleburg had to wait until the second to get on the board. Stand-out running back Stone Fincher and quarterback Kaleb Moore marched their team down the field, capping a 15-play drive with a Moore touchdown from a yard out. He also ran in the 2-point conversion to make the score 8-8 with 8:16 left to go in the half.

Addison chewed up another eight minutes on its next drive, with four different Bulldogs getting carries on the 12-play marathon. The drive was capped with an 8-yard QB keeper from Zayne Guthrie. The 2-point try was no good, but the TD gave Addison a 14-8 lead.

Hackleburg received the ball first to start the second half, but Addison held strong on fourth down and forced a turnover on downs, taking the ball back and going to work.

On the Bulldogs’ opening drive of the second half, Hackleburg was treated to a heavy dose of Tyler Borden, who carried the ball five consecutive times on the drive. Guthrie capped the drive with a 24-yard touchdown. The 2-point try failed, making the score 20-8.

The Bulldogs blew the game wide open in the fourth with four scores. The first came on a huge pass play from Guthrie to Logan Wilkins for a 59-yard TD. Then a bad Hackleburg snap rolled out of the back of the end zone for a safety. On the ensuing possession Guthrie scored on a 1-yard sneak over the top, and the Bulldogs finished their scoring onslaught with a 1-yard carry from Caleb Crider.

Hackleburg scored once in the second half on a 6-yard scamper by Fincher, who was kept in check all night by the Bulldogs.

The Bulldogs advance to the 1A quarterfinals and will take on South Lamar next Friday, Nov. 24.