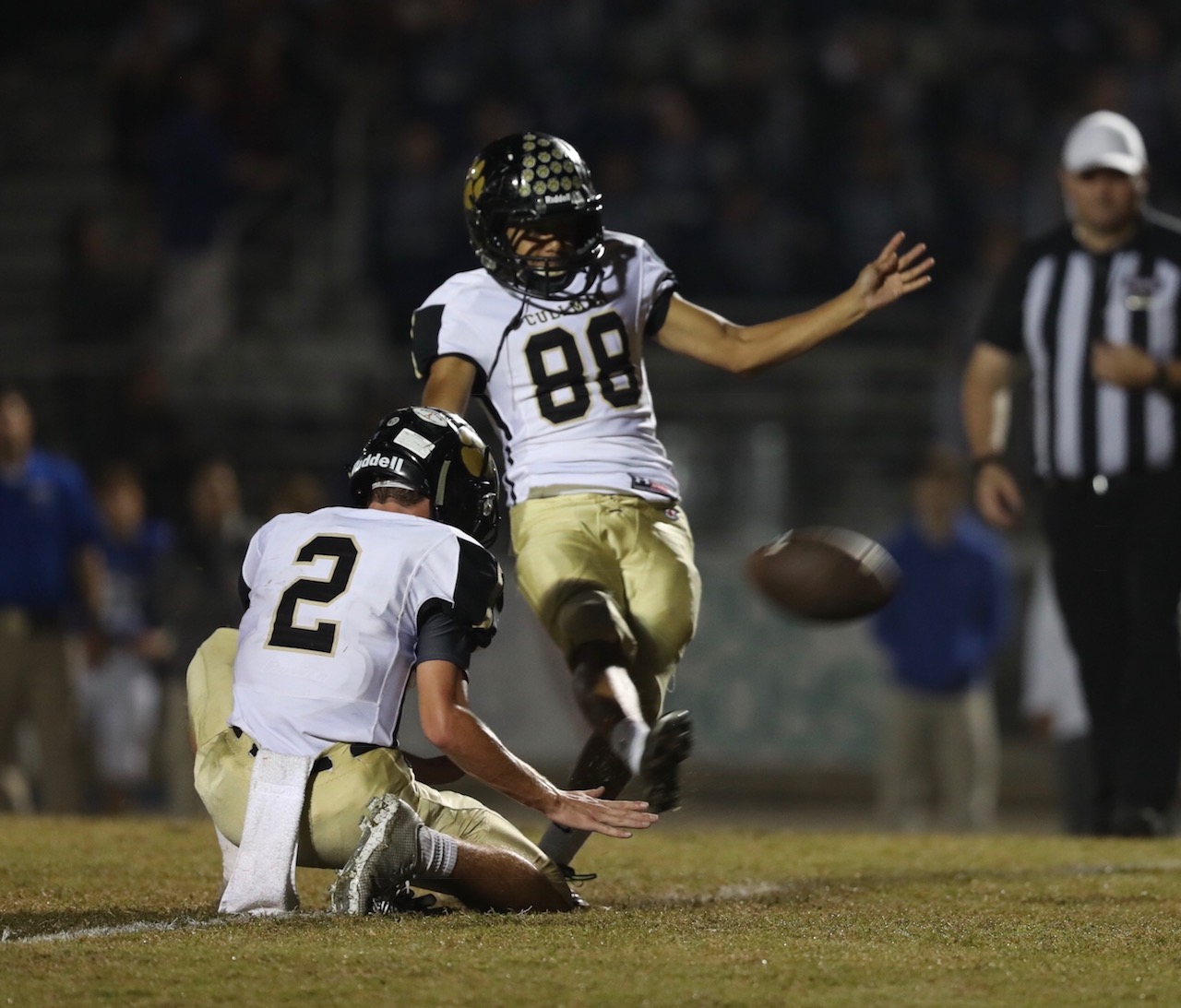 Cullman's Hayden Henderson (2) and Miguel Tizapa (88) last Friday night, Nov. 3, against Chelsea. The Bearcats will face Ramsay this week in the first round of the playoffs. / Joe McElroy

CULLMAN COUNTY – It is hard to believe that another regular season of high school football regular season is in the books. As most now turn their attention to the basketball hardwood, five local teams will press on this week in round one of the Alabama High School Athletic Association (AHSAA) playoffs. With three games slated for Thursday night and another two set to kick off Friday, there is still plenty of pigskin action left in the 2017 season.

The Bulldogs will look to impose their will on the Lions with their bruising ground game. Addison has outscored its opponents 382-137 in some big blowouts, and Thursday night looks to be no exception.

Holly Pond (7-3, 3-3 in 3A Region 6) had a solid season, securing a play-off spot by placing fourth in 3A Region 7. The Broncos will travel to Trinity to take on the West Morgan Rebels (9-1, 6-1 in 3A Region 8) who were second in 3A Region 8. The Broncos have a tall mountain to climb Thursday night as the Rebels have had their offense firing on all cylinders, putting up an impressive 409 points in the 2017 campaign for a 40.9 points-per-game average. Holly Pond is looking to buck this trend and keep the scoring low as the Broncos try to avenge their 55-26 loss in the first round of the 2016 playoffs.

West Point (6-4, 4-2 in 5A Region 6) played lights out in 5A Region 6 with a strong run game and downfield passing.  The Warriors took third place in their region meaning they will have to hit the road Thursday, traveling to Killen to take on the Brooks Lions (7-2, 6-1 in 5A Region 8), who took first in 5A Region 8. West Point was ousted by Wenonah in the first round of 2016 and Don Farley and his Warriors are looking to put that loss behind them and make a deep run in 2017.

Meek (7-3, 3-3 in 1A Region 7) earned its 2017 play-off spot in the Tigers’ last regional game, giving them sole ownership of fourth place in 1A Region 7. They will take to the road Friday night, making the trip to Reform to take on the Pickens County Tornadoes (8-2, 6-0 in 1A Region 5), who took first place in their region. This will be the first play-off appearance for the Meek Tigers since 2015.

The emotional roller coaster ride that has been the 2017 season for the third-place Cullman Bearcats, (7-3, 4-2 in 6A Region 7), is about to enter the home stretch as they head to Carver High School to take on the second-place (and defending 6A state champ) Ramsay Rams (6-4, 4-2n in 6A Region 5). Cullman would like nothing more than to bring home the 2017 6A state championship for retiring Bearcat coaching legend Mark Britton and the first step toward that goal comes Friday.

Stay connected with The Cullman Tribune at www.CullmanScoreboard.com for up-to-the-minute scores on game nights and www.CullmanTribune.com or www.facebook.com/CullmanTribune for full stories on all of this week's first-round play-off games.