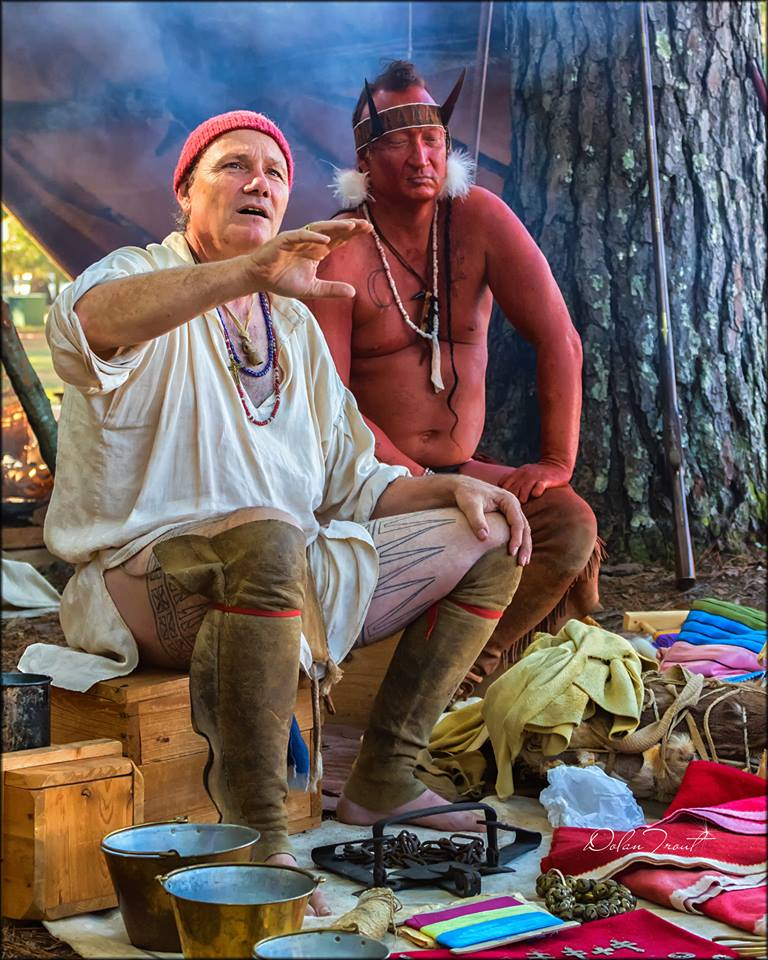 Reenactors in Wetumpka, on Saturday, Nov. 4 at the Alabama Historical Commission’s celebration of the 300th anniversary of the establishment of Ft. Toulouse by the French in 1717.  Photo courtesy Dolan Trout

WETUMPKA – Since March of this year, Alabama has been recognizing its establishment as a U.S. territory in 1817, while preparing to celebrate the bicentennial of its statehood in 2019.  What many folks don’t realize is that, for almost 20 years, certain places in the state have been celebrating TRI-centennials–that’s 300 years!

In 1999, Dauphin Island kicked things off by celebrating the 300th anniversary of the arrival of the French explorer Pierre Le Moyne, Sieur d'Iberville at the island in 1699, on his way into Mobile Bay.  Other significant early tricentennial dates:

1702 – The city of Mobile was founded at Twenty-Seven Mile Bluff on the Mobile River in the Tensaw Delta.

1711 – After an outbreak of disease, the city of Mobile was moved to its present location on Mobile Bay.

This past weekend, probably the last of the really-early tricentennial events took place in Wetumpka, north of Montgomery, as the Alabama Historical Commission celebrated the establishment of Ft. Toulouse by the French in 1717.

From the commission: “Fort Toulouse, a historic property of the Alabama Historical Commission, began its service as a frontier outpost for the French in 1717. The motivation for its establishment was the Yamasee War of 1715-1716, a conflict between local Indian tribes and South Carolina colonists that forced all British traders out of present-day Alabama. The fort, named for Adm. Louis Alexandre de Bourbon, Count of Toulouse, was initially constructed to extend the political, economic, and military reach of the French, who were based in Mobile.

“Fort Toulouse acted as a commercial, religious, and diplomatic center for the French from 1717 until 1763. The fort also provided a permanent locale where French merchants could trade their goods with the Creeks for deerskins, thus strengthening the relationship between the two trading partners. Fort Toulouse is one of the most important historical and archaeological sites in Alabama.

“The Fort Toulouse site was declared a National Historic Landmark in 1960, and the Alabama Historical Commission gained possession of it in 1971. Since then, teams of professional archaeologists have excavated the site and uncovered nearly the entire foundation of the third Fort Toulouse designed and rebuilt in 1751. Now known as Fort Toulouse-Fort Jackson Park, the site hosts various events on most weekends from the spring to mid fall, with living history demonstrations that recreate French, Native American, and colonial American life on the frontier.”

The event was open for school tours from Wednesday through Friday, with more than 160 mostly costumed volunteers helping out.  According to Al Bohler, a longtime park volunteer and portrayer of David “Davy” Crockett (who actually visited the area in 1813-14 as a member of the Tennessee Militia during the Creek War), more than 11,000 students visited the park during the school days.

The park is host to monthly living history days portraying French soldiers and settlers, members of the Creek tribe, and Tennessee militia of the Creek War and War of 1812, and also holds a French and Indian War encampment in the spring.  For more information, visit https://fttoulousejackson.org.

The tricentennial events do not include several sites that show a rich native history that long predates European settlement of Alabama.  For glimpses of the state’s native heritage within three hours’ drive of Cullman, consider visiting: