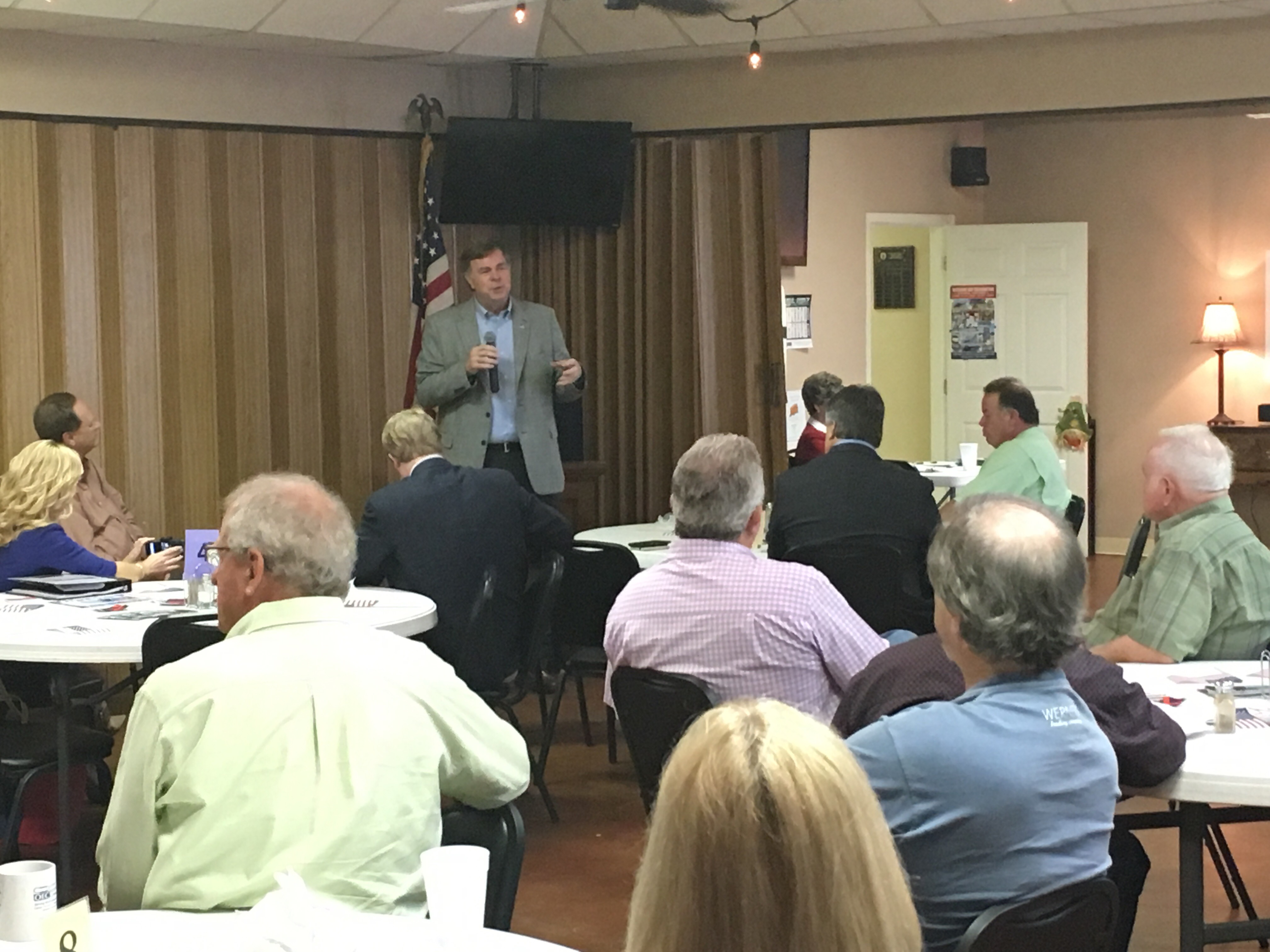 Cullman GOP Chair Waid Harbison got things started with an invocation and recognition of elected officials and veterans in attendance.

Cullman County Coroner Jeremy L. Kilpatrick took the opportunity to address the group about what he sees as the suicide epidemic in Cullman County this year. There have been 27 suicides in the county so far in 2017; the last three coming in a 25-hour span. In 2016, there were 16. Kilpatrick urged everyone in attendance to being thinking of possible solutions, and in no uncertain terms stated that more money needs to be put toward mental health care, a sentiment that Cullman County Sheriff Matt Gentry, Cullman Police Chief Kenny Culpepper and WellStone Behavioral Health COO Chris Van Dyke have all shared with The Tribune this year. (See more from Kilpatrick at http://qrne.ws/suicides)

Ledbetter used his time at the podium to discuss his colleagues in Montgomery and share some of their accomplishments.

“If you look at the political landscape, the percentages of people that cross the line, about one or two percent is no better or worse than the clergy or a business. That’s human nature, that happens, but the good thing about it is we have some of the best Christian men and women that I’ve ever known serving with me in the Alabama House of Representatives,” Ledbetter said. “I feel like it’s unfair that all politicians get put in the same basket because I’m here to tell you that’s not the truth. I’m telling you, you’ve got some of the best people in this state serving you in the House of Representatives.”

Ledbetter said his is proud of the economic development package put together by the House, saying he thinks it will benefit not just Cullman County but the entire state of Alabama.

“We’ve passed what I think is the best economic development package this state has had in my opinion. Since that bill was passed the state of Alabama’s economic growth has increased by $3.2 billion. It’s on track to creating almost 15,000 jobs. That’s your Republican Legislature that’s done that. Alabama was recently rated as one of the top five states in the country to do business and our unemployment rate is down to 3.8 percent; that’s never happened in Alabama. We took over a ship that was on a bad path and it’s taken us a while to turn it around, but Alabama is on the right track.”

Battle stressed that he remains committed to the Republican Party, saying, “We believe in free enterprise, we believe in jobs, we believe that you need to balance your budget and we believe that we need to get rid of government regulation. The most important thing the government can do is to make sure you have a path forward to become a productive member of your community and have a job.”

He continued, “When I was elected in Huntsville we started working on the answers to how you bring jobs and growth to an area and we took on education. You all do a great job with education here and that’s one of the most important things to have in a community. What we want is for people to have opportunities to work and be prosperous in all of our communities across the state.”

The Cullman County Republicans meet on the first Saturday of each month at the Cullman Elks Lodge. Breakfast begins at 7:30 a.m., with meeting following at 8 a.m.  Breakfast is $10; there is no charge to attend the meetings. The Elks Lodge is located at 1525 Brantley Ave. NW, Cullman.

For more information on the Cullman County Republican Party or the monthly breakfast program, contact Chairman Waid Harbison at 256-708-1650.