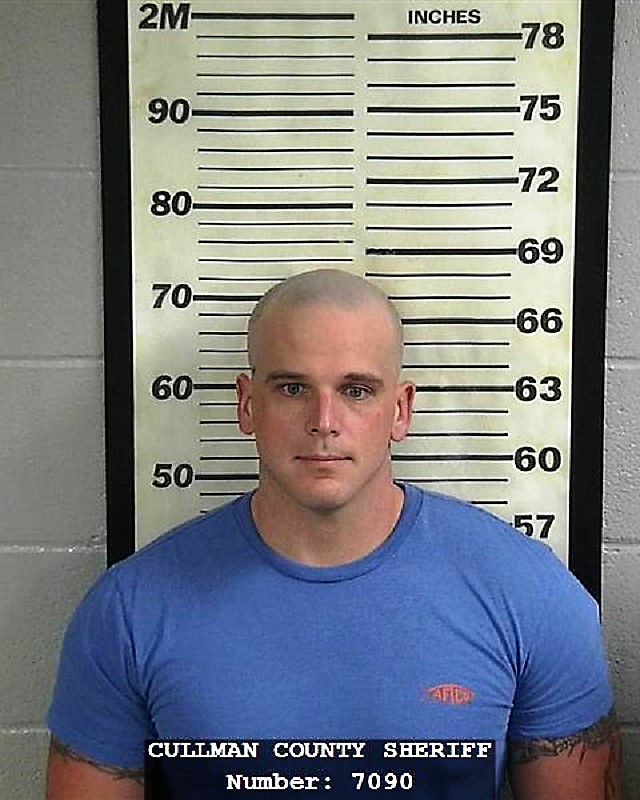 CULLMAN – Bradford Neal Meeks, the man who has been at the center of the investigation into the fatal car crash that claimed the life of Cullman High School student and athlete Curtis James Wilson, 15, on Sunday, May 7, 2017, has been indicted by a grand jury for reckless murder. Meeks was indicted in Cullman County last week and today, Tuesday, Oct. 10, 2017, he turned himself in to the Cullman County Detention Center. Meeks is charged with reckless murder, DUI .08 or greater, DUI, unsafe lane change, driving on wrong side of the road, possession of open container of alcoholic beverages in a motor vehicle and third-degree assault. He has made bond, which was set at $150,000 property by Cullman County Circuit Judge Martha Williams.

Toxicology reports from UAB Hospital revealed that Meeks, 27, of Cullman, the driver of the truck that hit Wilson and his mother, Ashley Wilson, 43, had a blood alcohol content (BAC) of .256, approximately three times the legal limit, at the time of the wreck.

The case has been the source of much scrutiny, with many in the community expressing frustration with what they perceived as the wheels of justice moving too slowly. But according to Cullman County District Attorney Wilson Blaylock, his office had to wait for all of the information to come in before moving forward. The investigation was handled by the Alabama Law Enforcement Agency (ALEA), and toxicology reports run through the state forensics lab.

Said Blaylock, “It’s a case that we waited to have all the facts before us before we presented it to the grand jury. We kept the immediate family informed all along the way. Now starts the process of the prosecution.”

Blaylock said Meeks will be arraigned in roughly three weeks, but it could be several months before the trial begins.

According to Alabama Code Alabama Code Title 13A. Criminal Code § 13A-6-2, a person commits reckless murder if  “(2) Under circumstances manifesting extreme indifference to human life, he or she recklessly engages in conduct which creates a grave risk of death to a person other than himself or herself, and thereby causes the death of another person.”

The Cullman Tribune learned from several sources shortly following the fatal incident that Meeks was allegedly driving erratically prior to the crash and that he allegedly made statements on the scene that led law enforcement to believe he was not sober. Additionally, Meeks has an extensive criminal history with at least two previous DUI charges.

On May 18, Ashley Wilson filed a wrongful death suit against Meeks. The document filed with the court alleges that, at the time of the incident, Meeks was driving “negligently, wantonly, recklessly and/or otherwise unreasonably;” and that he was “unfit to drive and/or failed to maintain control of his vehicle.”  She also filed against her own insurance providers Allstate and Alfa, demanding payment on underinsured motorist claims.

In June, all three defendants responded to the suit in documents submitted to the court.  Meeks, on June 5, through his attorney Gaynor St. John, made a “general denial” of Wilson’s allegations, pleading that Meeks’ actions behind the wheel were not negligent, but instead were the result of a “sudden emergency.”

Allstate Insurance, on June 5, through its attorney Cornelius Warren, denied Wilson’s claim.  Included in its response were allegations that Wilson failed to state claims that could be paid, and also that her claims failed to meet the statute of limitations.  Furthermore, Allstate charged Wilson with “contributory negligence,” a legal term alleging that her actions during the incident contributed to her own injuries and her son’s death.

The Tribune reached out to an attorney for more on what exactly the “contributory negligence" claim means.

According to Birmingham-based attorney Tracy Miller, who is not associated with the case, "Contributory negligence is a standard affirmative defense that is deemed waived if not pled in a defendant’s answer. The mother’s complaint and the answers filed by the defendants in response thereto are called pleadings, and both have formal, legal requirements that may not make much sense to someone not engaged in the practice of law. It does not mean the facts and evidence obtained during the discovery process will show the mother was negligent or that any of the defendants actually believe she was negligent. The defendants must assert all affirmative defenses now and determine through discovery if any defenses actually apply to the case.”

Alfa Insurance, on June 2, through its attorney Michael Haggard, denied Wilson’s claim on constitutional grounds, arguing that the punitive damages she seeks violate due process and equal protection clauses in the U.S. and Alabama constitutions.  It also denied that the accident was caused by an underinsured motorist.

Both Insurance companies admitted that Wilson had underinsured motorist coverage with them, and both requested set-off: the right to withhold payment until they find out how much the other defendants will be required to pay, and to determine their required amounts accordingly.

“We all are devastated by Curtis's death and are still grieving as a family,” Ashley Wilson said. “He was an absolutely wonderful son, brother, grandson, nephew.  We are still looking for answers surrounding his death and we hope to find them soon.  He was deeply loved and we miss him every single second of every single day.”

The motion states, in part, “Meeks has a reasonable apprehension that he cannot defend himself in this action without surrendering his constitutionally protected privilege against self-incrimination, or, if he asserts his Fifth Amendment privilege in this civil action, creating an adverse inference against him. In short, Meeks’ privilege against self-incrimination will be violated unless this Court grant the relief requested.”

Curtis Wilson was a passenger in a 2004 GMC that collided head-on with a 2008 Ford driven by Meeks. The teen was transported to Children's of Alabama in Birmingham by helicopter from the scene of the wreck, where he later died from his injuries. The incident occurred just after 6 p.m. on Sunday, May 7 in the 2000 block of County Road 222 in front of Van's Sporting Goods.

The driver of the GMC, Ashley Wilson, was transported to Cullman Regional by ambulance for treatment of her injuries. Meeks was airlifted to UAB Hospital in Birmingham.

Troopers also identified a third vehicle involved. The driver of that vehicle, Lisa Hebert, 50, of Gardendale was not injured.

Curtis Wilson, who was a sophomore at Cullman High School, was the second area student to be killed by a suspected drunk driver this year. On March 28, Tonya J. Busbee, 34, of Bremen and her daughter, Rhianna Busbee, 13, a student at Cold Springs, died after being hit head on by another driver on County Road 813. The driver who hit the Busbees was Jonathan Biggs, 53, of Dayton, Ohio. Biggs was also indicted for reckless murder last week, according to Blaylock. The Tribune is working to gather the details in that case.

An itemized chronological listing of all offenses recorded in Alacourt for Meeks between 2012 and the present includes the following offenses related to driving and/or drug and alcohol use, among others:

Both charges were dismissed same day by Judge Wells Turner.

5-25-2016: dismissed from The Shoulder without completing program

9-21-16: after release from custody in Cullman County, was booked into Madison County Jail on two counts of probation violation.

06-09-17: arrested by the Cullman Police Department for fourth-degree theft of property. Meeks had a warrant, issued April 24, stemming from an incident on April 11 in which he allegedly walked into The Spot Beverages, a liquor store located at 1943 Second Ave. SW in Cullman, and left with two bottles of vodka, without paying. Bonded out the same day.