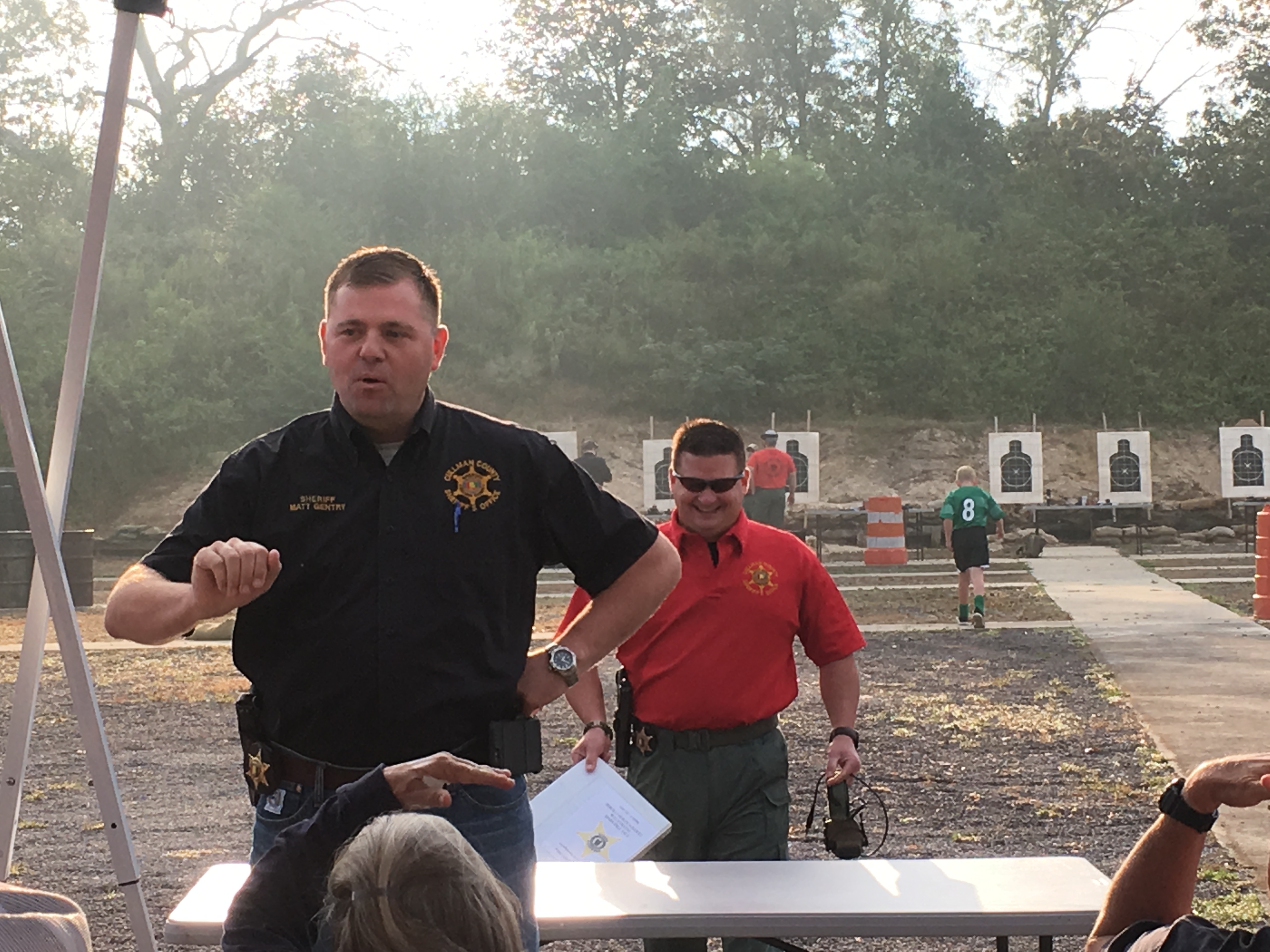 Sheriff Matt Gentry talks about the use of firearms by law enforcement officers as instructor Sgt. David Nunn gets ready to bring students to the line. / W.C. Mann

CULLMAN – Law enforcement officers today have numerous tools at their disposal with which to deal with criminals.  First, they are well-trained in techniques of communication and negotiation, to prevent confrontations from becoming violent when possible.  Then they learn unarmed defense and control methods based in various martial arts.  When things escalate far enough, officers may use pepper spray, telescoping steel batons (the modern version of the classic nightstick/billy club), and the taser (which can immobilize a subject with a non-lethal electric charge).

Whatever else an American law enforcement officer may know or carry, one thing has remained a staple from the first days until now: firearms.  With all the new goodies, the conditions under which a gun can be used have become more strictly defined and firearms have become tools of absolute last resort, but they still remain in the place on the belt that the officer can most easily reach with his or her strong hand.

On Saturday, students in the Cullman County Sheriff’s Office (CCSO) Citizens’ Academy went to the range with sheriff’s deputies, to get hands-on with common law enforcement firearms.  FBI-certified firearms instructor Sgt. David Nunn and other deputies walked students through gun safety procedures, shooting stances, and aiming and firing instructions.  Then they took the students to the line in small groups for one-on-one supervised range time with a common duty pistol, a typical tactical carbine used by SWAT and special response teams, and even a fully-automatic submachine gun.  Some were nervous, some were eager, but everyone seemed to walk away smiling.

Students got to try out three law enforcement firearms:

Glock G17 pistol: a lightweight nine-millimeter (9mm) pistol built on a polymer frame.  It fires from a high-capacity 17-round magazine.  Made in Austria (Those sold in the U.S. are assembled in Smyrna, Georgia from Austrian parts.) and sold internationally, it is considered to be the most common currently-used law enforcement handgun in the world.  Glocks are known to be reliable, simple to learn, reasonably accurate, and easy to disassemble for cleaning and maintenance.  CCSO patrol deputies carry the G17’s big brother, a .45 automatic designated G21.

AR-15 tactical carbine: a compact rifle based on the U.S. military M-4 carbine, a smaller version of the M-16 assault rifle.  Like its military counterpart, the police AR fires a 5.56mm / .223 caliber rifle cartridge from 20 or 30-round magazines, and has accessory rails for attaching scopes, lights, lasers and other goodies.  It also has a buttstock whose length can be adjusted to suit the user.  Those used by the CCSO have Eotech holographic sights, tactical lights, and vertical foregrips; some have bipods.  Unlike the M-4 and M-16, the CCSO’s ARs are semi-automatic, not capable of fully automatic or burst fire.

Heckler and Koch (H&K) UMP: a compact modular submachine gun with a lightweight polymer receiver; with the exchange of a few components, it can be configured to use ammunition in three common law enforcement calibers: 9mm, .40 S&W, and .45 ACP.  Those used by the CCSO are chambered in .45, like its duty pistols.  By use of a four-position selector (including “safe”) the UMP can fire single shots, two shot bursts or fully automatic at a rate of up to 10 rounds per second.  The CCSO often mounts suppressors/silencers on its UMPs.

The CCSO offers firearms safety and self-defense classes to the public.  For more information, visit www.cullmansheriff.org or call 256-734-0342.