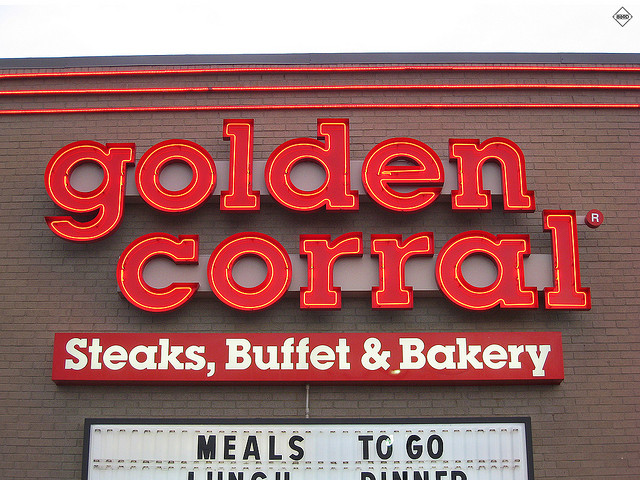 CULLMAN – Golden Corral is on its way to the Cullman area, according to officials with the Cullman Economic Development Agency and the restaurant chain itself.

"We are very excited to add Golden Corral to Cullman’s restaurant lineup in the former Ryan’s building," said Susan Eller, CEDA project coordinator. "We do not have a definite opening date but are working with Golden Corral officials. It will be sometime this fall."

An official press release from the restaurant chain stated, "Golden Corral Buffet & Grill is excited to be entering the Cullman, AL market as it begins preparations to open its newest corporately-owned restaurant, located at 1720 Cherokee Avenue, SW in Cullman, AL later this fall.  The approximately 10,000 square ft. Golden Corral has seating capacity for 350 guests, and brings approximately 100 jobs to the community."

Continued Eller, "Golden Corral is very community-minded and will be a great corporate citizen.  One of the first things we discussed were ways they give back to the community.  They are a huge supporter of Disabled American Veterans and their families and annually host a 'Military Appreciation Night' where they feed active military personnel and veterans."

According to Golden Corral Marketing Director Sandy Choate, "The restaurant will feature endless home-style buffet favorites such as pot roast, fried chicken, meatloaf, mashed potatoes and steamed vegetables, plus a variety of international tastes and flavors including Italian and Mexican and signature seafood dishes. Guests will be able to enjoy premium meats slow smoked in-house over aged mesquite wood at our Smokehouse station.  Sirloin steak is grilled to order, carved, and served daily at dinner.

"As a complement to the hot buffet items, the restaurant features a market-fresh salad bar, where guests may build their own salads from dozens of ingredients.

"Rounding out the buffet offering, a variety of cakes, pies and homemade breads—including warm, melt-in-your-mouth yeast rolls—are served on the Bakery buffet.  The new Cullman Golden Corral will also showcase their legendary Chocolate Wonderfall – an ever-flowing chocolate fountain for dipping your favorite fruits and dessert treats.

"Cullman's Golden Corral will serve a Sunrise Breakfast Buffet every Friday, Saturday and Sunday morning from 9:30 –11 a.m. A 7-Day Brunch will be served every day from 9:30 a.m. – 2 p.m. and will feature specialty waffles, made-to-order eggs and omelets and so much more.

"The restaurant will have two spacious separate meeting rooms available for large groups and organizations in the area that choose to dine at Golden Corral.

"Golden Corral Corporation is enthusiastic about locating to the Cullman market – a community that they feel is a perfect fit for their brand and a great location to become an active part of Cullman’s business community."

Golden Corral Corporation is privately held company and was founded in 1973.  Lance Trenary serves as its president and chief executive officer.  Golden Corral currently has 487 restaurants in 40 states.

The company’s vision is to be the leader in the family restaurant segment by making pleasurable dining affordable for every guest, at every restaurant, every day.  Golden Corral restaurants nationwide have long been strong supporters of the U.S. Military and the Disabled American Veterans (DAV).  Golden Corral has helped raise more than $11.5 million for the DAV as part of its annual “Military Appreciation Night" initiative.  For more information about Golden Corral, visit www.goldencorral.net.