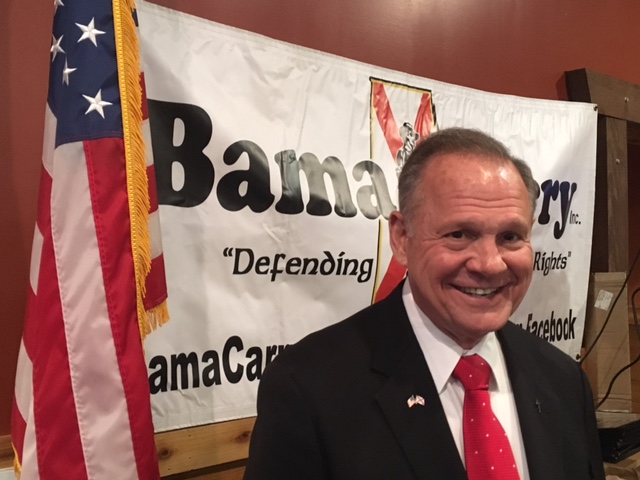 Henry is a state representative from Hartselle who was, at one point, a candidate for this year’s special U.S. Senate election.  After leaving that race, he threw his support behind Brooks.  In his brief address, he talked about the danger of long-term career politicians and the need for fresh blood in Washington.

Merrill talked about his work as the secretary of state, touting achievements including decreasing business filing times from up to nine months down to one day, speeding up processes while shrinking his office staff from 49 to 37, and promoting voter registration.

As he routinely does, Merrill distributed business cards with his personal cell phone number, explaining, “I get this question everywhere I go: ‘Why do you give your cell phone number to everyone that you meet in Alabama?’  If you don’t remember anything else I tell you tonight, remember this: I work for you.”

After his planned speech, Merrill took questions from the pro-Second Amendment crowd about pistol licensing in the state.  A major point of contention was the inclusion of the logo of the Alabama Sheriffs’ Association, a non-governmental private lobbying group, on the new pistol permit.

Merrill addressed that complaint, “The reason that we put the emblem on there from the Alabama Sheriffs’ Association was because that was the only concession that our office made to them, on acknowledgement of identification.”

Early in the evening, The Tribune met with Moore to ask him about one of the biggest political developments of the week:

What does it mean to have the endorsement of Chuck Norris?

Moore responded, “It’s great!  I mean of all the people, I really admire Chuck.  I’ve known him for a long time, I was out at his home in Texas, we’ve spent time together.  He was a military police officer in Korea, where he learned karate, and I was a military police officer in Vietnam.  He served a little bit before me.  I trained under a fellow that was a good friend of his, so I know him several different ways.  He’s a very nice man, very humble.

“I didn’t talk to him before this endorsement.  I was very happy that he gave me one, and pleased with what he said.”

During his address, Moore emphasized his support for the Second Amendment and gun rights as part of a larger presentation on the need for a return to strict judicial interpretation of the U.S. Constitution.  He also pointed to the importance of the Declaration of Independence for understanding the nation’s laws.

Later in his address, Moore commented on the apparent stalemate in Washington.

“Right now, everybody knows in Alabama that Donald Trump’s agenda is being held up.  You know who’s holding it up: not just the Democrats, but the Republicans.  They’re holding up the agenda of Donald Trump.  They’re tying his hands behind his back.  They’re messing over the leader of their own party, and I’m letting you know what they’re doing.

Moore also promoted Trump’s policy of excluding transgender persons from military service, along with lowering taxes and regulations to promote free enterprise.  He pushed the idea of the so-called “fair tax,” which emphasizes taxation of spending over taxation of income.

Moore concluded his address by returning to his early theme, by challenging federal judges who, he argued, “have placed themselves above the Constitution.”

In an exclusive statement to the Tribune, Moore shared, “I’m excited that the race is coming up in less than a week.  You know, Aug. 15’s going to be an important date for our country, because I think the people of Alabama and the people of America wanted a change; that’s why they elected Donald Trump.  And there’s an establishment in Washington consisting of both the Republicans and the Democrats, that don’t want to move.  They don’t want to change, and that’s a hindrance I hope we overcome.”

In breaking news late Tuesday night, after the event wrapped, President Donald Trump announced via Twitter his endorsement of incumbent Sen. Luther Strange, saying, “Senator Luther Strange has done a great job representing the people of the Great State of Alabama. He has my complete and total endorsement!”

Senator Luther Strange has done a great job representing the people of the Great State of Alabama. He has my complete and total endorsement!

Both the Democratic and Republican primaries for the special senate election are next Tuesday on Aug. 15. The general election is in December.