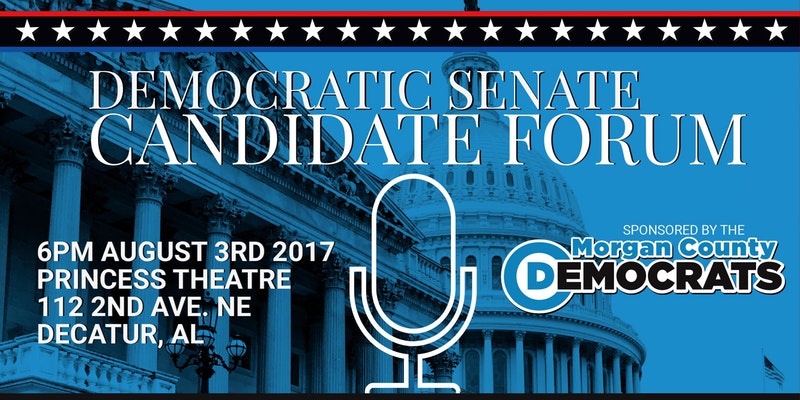 DECATUR – The Morgan County Democrats will host a forum tonight featuring all seven of the Democratic candidates participating in the Aug. 15 special election primary for the U.S. Senate seat vacated by U.S. Attorney Gen. Jeff Sessions. The event will be held at the Princess Theatre, 112 Second Ave. NE, in Decatur at 6 p.m. Doors will open at 5 p.m. to allow voters to mingle and meet with the candidates.

The seven Democratic candidates are:

– Dr. Will Boyd, minister from Florence and chairman of the Lauderdale County Democratic Executive Committee

The candidates will answer questions from the moderator about issues including health care, education and economic policies, among others. Due to time restraints and the number of candidates, the forum will only be able to address less than 10 different issues, and the audience will not be able to ask their own questions while the forum is in session.

The forum will be moderated by Rev. Dr. Susan Parker. She served in statewide elected office as Alabama’s state auditor from 1998-2002 and public service commissioner from 2006-2010. In 2002, she became the first woman ever nominated in Alabama for the U.S. Senate.

The Republican candidates were a part of a forum in Cullman last Friday night.

The U.S. Senate seat up for grabs is currently held by Republican Sen. Luther Strange, who was appointed to the seat by former Alabama Gov. Robert Bentley when Sessions was appointed U.S. Attorney General by President Donald Trump.