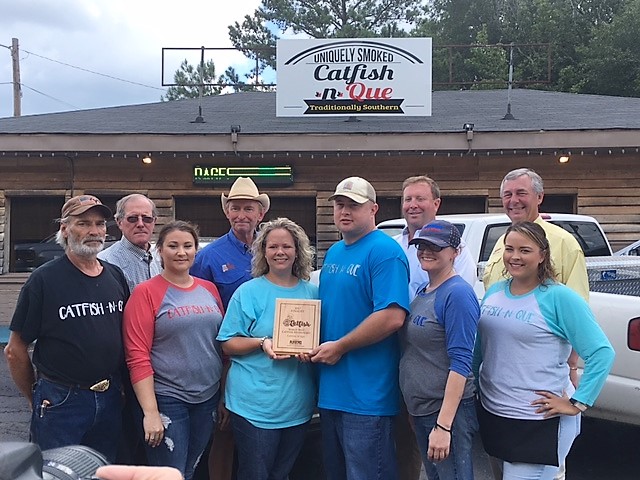 CULLMAN – On Thursday, judges arrived to sample the catfish and fixins’ at Catfish N Que, selected as one of four finalists in the Alabama Farmers Federation’s second annual “Bama’s Best Catfish” contest.  Cullman’s offering was the team’s first stop; they went on to finish their day at Swamp John’s in Red Bay.  After stops at the Orrville Farmers’ Market and David’s Catfish House in Atmore on Friday, the deliberations will take place over the weekend; the winner is to be announced Tuesday, July 18.

“The top four nominees were selected from recommendations on the Catfish Farmers’ website and on Facebook.  The top vote getters were then chosen as finalists for the judges to come and sample their dish.  All four of them are finalists and will receive a plaque from Alabama Catfish Producers; at the end of the sampling, they’ll decide who’s the best and they’ll receive a plaque as Alabama’s best catfish restaurant.”

Davis introduced the panel of judges:

Sid Nelson, chairman of Alabama Catfish Producers, did not judge but sat in to advise the judges.

So, just what are the judges looking for?

According to returning judge Allen, “Of course you look for the taste of the catfish and the breading, you look at the side dishes, how it’s plated, the atmosphere and ambience of the place–you try to look at it all.”

“It’s almost like a beauty contest,” said Hunter.  “You hate to pick one girl and say, ‘You’re prettier than all the other girls,’ because they’re all pretty.  It’s difficult, because all catfish is good, even better if it’s Alabama catfish.  I’m going to kind of let the catfish speak for itself; as Indiana Jones says, I’m going to make this up as I go.”

After only the first stop on their catfish tour, the judges were not ready to make a judgement call about the food, but did indicate that they enjoyed their lunch.

The statewide champion will be named next week, leading up to National Catfish Month in August. They will receive a cash prize, a Bama’s Best Catfish plaque and will be featured in the September issue of Neighbors magazine, a publication of the Alabama Farmers Federation.

Also, one finalist will be named People’s Choice Award winner based on a Facebook vote. Facebook users may vote for their favorite restaurant by liking the photo in the Alabama Farmers Federation's “Bama’s Best Catfish – People’s Choice Award” album. The contest runs through 9 a.m. Tuesday, July 18.

All of the restaurants in the contest serve farm-raised catfish from southwest Alabama, where catfish farming is a staple of the local economy.  Statewide, farming, processing and retail sales of catfish employs more than 6,000 Alabamians in an industry that has a $172 million annual economic impact.