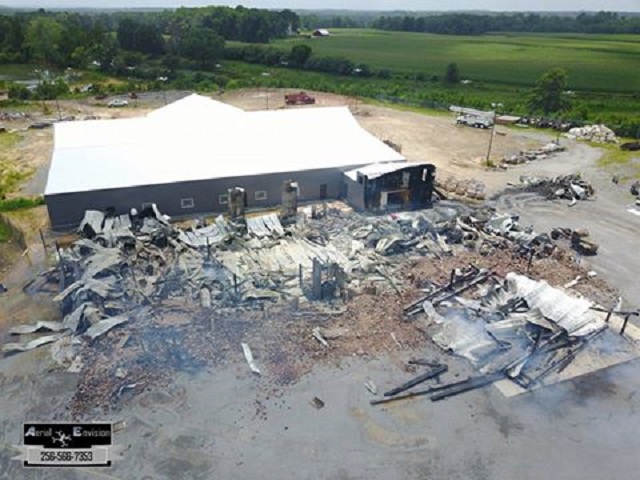 CULLMAN – In the aftermath of the Brick Haven fire on July 1, Logan Fire & Rescue Chief Toby Bates lodged a very public complaint about water pressure issues around the county during a television news interview (http://qrne.ws/whnt).  Bates was unavailable for comment when The Tribune first looked into the matter, but has since spoken to us to share more about his view of the county’s water system, and what has happened since the fire.

“The water department thinks I threw them under the bus about this,” he began, “but this was not a personal attack on Randall (Waldrep, Cullman County Water Department manager).  This has been going on for years.  It didn’t just pop up this week, and it’s getting to be more and more of an issue.”

According to Bates, the water system of Cullman County already suffered from weak water flow, and the problem is getting worse as new construction means more residences and businesses drawing from water lines.  He feels that the system, already behind the curve, is not keeping up with the county’s growth.

According to Bates, during the Brick Haven fire, two trucks with onboard high-capacity water cannons known as “deck guns” had to take turns fighting the fire.  The trucks’ pumps could not draw enough water from the hydrant at the same time to keep both of their onboard tanks full enough to maintain pressure.  One would have to sit idle as its tank refilled, while the other drained its tank spraying the fire.

Bates continued, “If we use 4,000 gallons of water on a fire, people down the road complain about not having any water after.  Part of our ISO requirements have to do with our hydrants and how much we can flow.  Other departments are having the same problem; over half the departments in the county’s ISO ratings are getting killed on water pressure.  Our fire hydrants are not going to protect houses.  They need to flow at least 750 gallons a minute, and we’re not getting anywhere near that.”

ISO ratings from the International Organization for Standardization are taken into account by insurance companies when calculating homeowners’ insurance rates in a given community.  Firefighting resources are an important element of community resources that affect ISO ratings.

“I wish the other departments would start voicing their opinions,” said Bates.  “I think a lot of them are afraid to say anything.”

Bates met with Waldrep last week, and he hopes that the conversation might lead to positive change.  Waldrep admitted in a Tribune interview that the county water system suffers from lower pressure at points of higher elevation, explaining that the problem is physics, not pumps and regulators.  He also admitted that the water department’s primary focus is on providing clean drinking water.  While offering no apology for his commitment to the task for which he was hired, Waldrep did pledge to seek ways to cooperate with firefighters. (See http://qrne.ws/water)

Bates stated, “I understand, after the meeting, what they’re saying about clean drinking water.  We need fire hydrants for fighting fires, and the water department is concerned about drinking water.  It’s a two-way street: we have to have clean drinking water, but we also have to able to fight fires.  I don’t know the fix to it, but maybe they’re looking at things a different way now.”