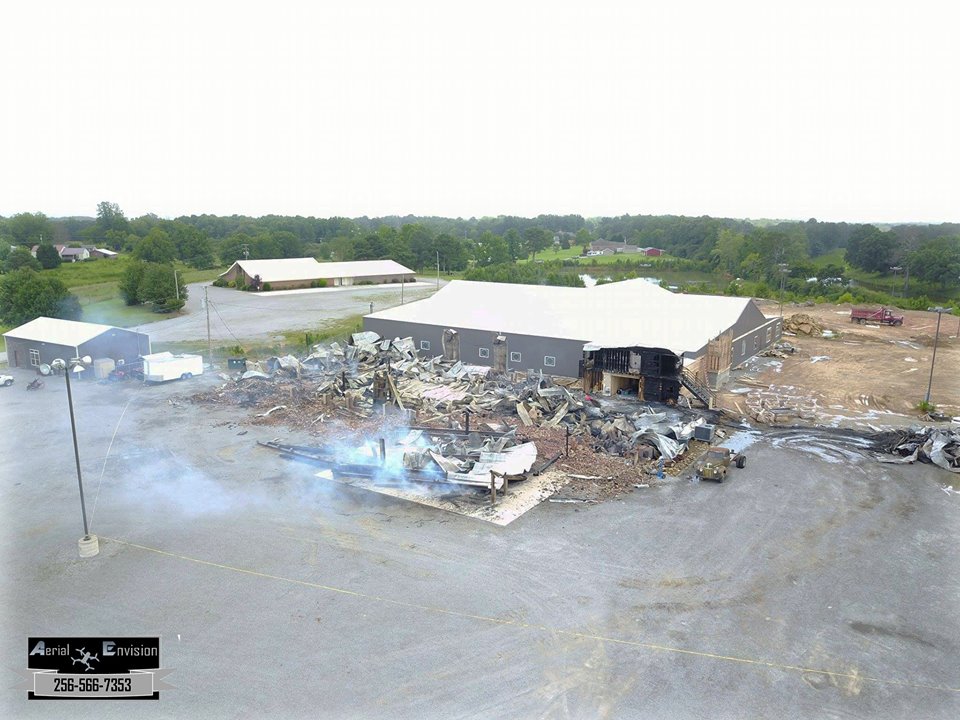 Firefighters on the scene of the fully-involved blaze at Brick Haven on July 1 were frustrated with the available water pressure. This photo shows the aftermath.  / Courtesy of Aerial Envision

CULLMAN COUNTY – Around 1 a.m. on Saturday, July 1, the Bethsadia Volunteer Fire Department received a call to a fire at Brick Haven event venue.  Within a short time, six local volunteer departments were on the scene, along with Cullman Fire Rescue, battling a blaze that was consuming the front building at the complex.  Among those departments were firefighters from Logan, and their Chief Toby Bates.

By dawn, the front building had burned to the ground, but crews had saved the rear building only 15 feet away.

After daylight came, a tired and frustrated Bates was interviewed in front of the smoldering remains of the front building by WHNT 19 News from Huntsville.  In that interview, he offered a scathing commentary about the county’s water system, stating that it regularly suffers from insufficient water pressure to fight fires, and that the County does not consider the rural water system to be a firefighting resource.

Bates’s told WHNT, “When we started trying to put water on it, we noticed that our water supply wasn’t the greatest.  I don’t know if the County’s got the lines turned down or what, but we had a hard time feeding three or four different engines and relaying water back and forth, and trying to put the amount of water we needed on the structure to get the fire out.  I called our dispatch to have the county to see if they could come turn the pressure up for us.  Of course, they never come out, but it’s sort of aggravating, because I would think on that large line out there we’d have enough water pressure to do what we needed; and we didn’t.

“I just figured that the County’s got it turned down, and like all the other instances, they tell us that the fire hydrants are flush valves only; they’re not made for us to fight fire with, so they’ve got them turned down.  We’ve had a few instances in the past where they’ve came out and told us that water was for personal consumption, not firefighting.  It makes it challenging for us, trying to use the water, and we don’t have the required pressures that we need.”

The full interview is available on WHNT’s website at http://whnt.com/2017/07/01/structure-fire-shuts-down-highway-278w-in-cullman-county/.

For an independent perspective, The Tribune sought out a neutral third party opinion on the water system by consulting the Hanceville Fire Department, which often goes out into the county to assist local VFDs with fires but was not involved in the Brick Haven incident.  Assistant Chief Bart Absher, who had previously viewed the interview video, confirmed that county water lines are prone to lower pressure than firefighters want during emergencies.

“We find hydrants scattered throughout the county that have limited flows,” said Absher.  “I don’t know of any right offhand that have absolutely horrible flows, but I can understand (Bates’s) concerns.  I did watch the video, and he had some very legitimate concerns.

“It’s a concern in the fire service nationwide that the water systems were established X amount of years ago, and they put in a particular diameter pipe.  The standard is 6 inches or larger.  But then, just like back over here behind Rehau, they’ve started building subdivision after subdivision down through there.  They’re building 30, 40, 50 homes per subdivision.  If they don’t come back in and increase that water pipe to the supply line going down that street, then the volume going to those houses just sucks the line dry.  There’s just not enough water in there.  Each department kind of knows their bad spots, because we do yearly testing of hydrants.  There is concern everywhere with water, in our area, and in all the counties surrounding us.”

Absher did give the County and local water systems credit for supplying their lines with an increasing number of hydrants.

He stated, “One thing I do give props to all the water departments for is the amount of hydrants they’ve gone back and added.  They do help.”

Concerning the Brick Haven incident, Absher said, “With a fire that size, you’ve got to have a lot of water to put it out.  We work on formulas and square footage; if it’s totally involved, we know how much water per minute’s got to be put on that fire to put it out.  If not, you’re just cooling it until it burns out.  That looks like what might have happened there.

“But,” added Absher, “they did an absolutely great job salvaging that (rear) building.”

According to Absher, when the Hanceville department is called to assist a rural VFD, its standard procedure is to send a response truck with a 1,000-gallon onboard water supply, so its personnel can offer an immediate response regardless of water conditions on the scene.  It also partners with departments in Blount County that have large water tankers that can be dispatched into Cullman County as needed.

“We make arrangements before we ever pull out of the station,” said Absher, “to make sure we’ve got some kind of water source, either taking it with us, or getting somebody else to be headed that way with it.”

In the case of a large event like Brick Haven, the sheer size and scope of the fire can still overwhelm small department resources.

“The pressure is determined from the elevation of the tank to where the customer is.  Every 2.31 feet (downhill) equals one pound of pressure.  People at higher elevation are going to have lower pressure, and those at lower elevations are going to have higher pressure.  The only way you can give them more pressure is to raise the level of the tanks, and we don’t have the money to do that.  The tank would have to be taller, because that’s what determines the pressure.

“We didn’t see a problem with the pressure.  We looked at the telemetry, and everything should have been fine.  I don’t feel like they could have put the fire out if it was fully engulfed, anyway; but I’m not a fireman.  I appreciate what they do, I do; but my main concern is keeping people with safe drinking water."

Waldrep did not wish to appear unconcerned about firefighting, but wanted to point out that the stated mission of the County Water Department, and therefore his job, is to supply its customers with clean drinking water.  Fire departments are allowed to use the lines, but their work falls outside his jurisdiction.

During the Brick Haven fire, multiple trucks were drawing water simultaneously, contributing to the loss of pressure.  Waldrep explained, “The more people using that line, the lower the pressure's going to be.  It depends on how much they’re drawing, but you certainly will lose some water pressure.  It can be kind of like a main breaking.  You’re definitely going to lose pressure, and there’s nothing we can do about that.

“We had a good meeting, me and the fire chief (Bates).  He actually apologized to me, and we’re going to try to work together to have a better relationship; and if I can help him, I will.

“But there’s going to be places where we’re not going to have as good pressure.  There’s nothing I can do for that, due to elevation.  In Cullman County, we’ve got a lot of hills and hollers; and everybody’s not going to be on the exact same water pressure.  We do have some regulators in place in high mountains, to keep people below from getting blown out.

“We do the best we can.  We definitely didn’t have the water pressure cut down.  I understand Toby’s stress: fighting the fire all night, and frustrated.  I don’t hold any grudge.  We’ve talked, and we’re not at odds; we’re going to try to work together.

“I’m not going to promise I can fix all the problems; I may not be able to, and I’ve told him that.  We’re going to look at some issues that he’s told me about; if it’s something I can help him with, I will.  If I can’t, we just can’t.”

Waldrep concluded by returning to the primary mission of the County Water Department. “I’m going to do everything I can to provide our customers with safe drinking water.  If I can help the fire departments out, I certainly want to do that as well.  I understand the fire departments’ jobs and I respect that, but I’ve got a job to do, too, and that’s to keep people with safe drinking water.

“But yes, I do want to help the fire departments, and I’ll be willing to work with them.  I just want to say that I do appreciate the job that they do.  I know it’s a very important job, and they work hard at it, and I’ll certainly work with them any way I can.”