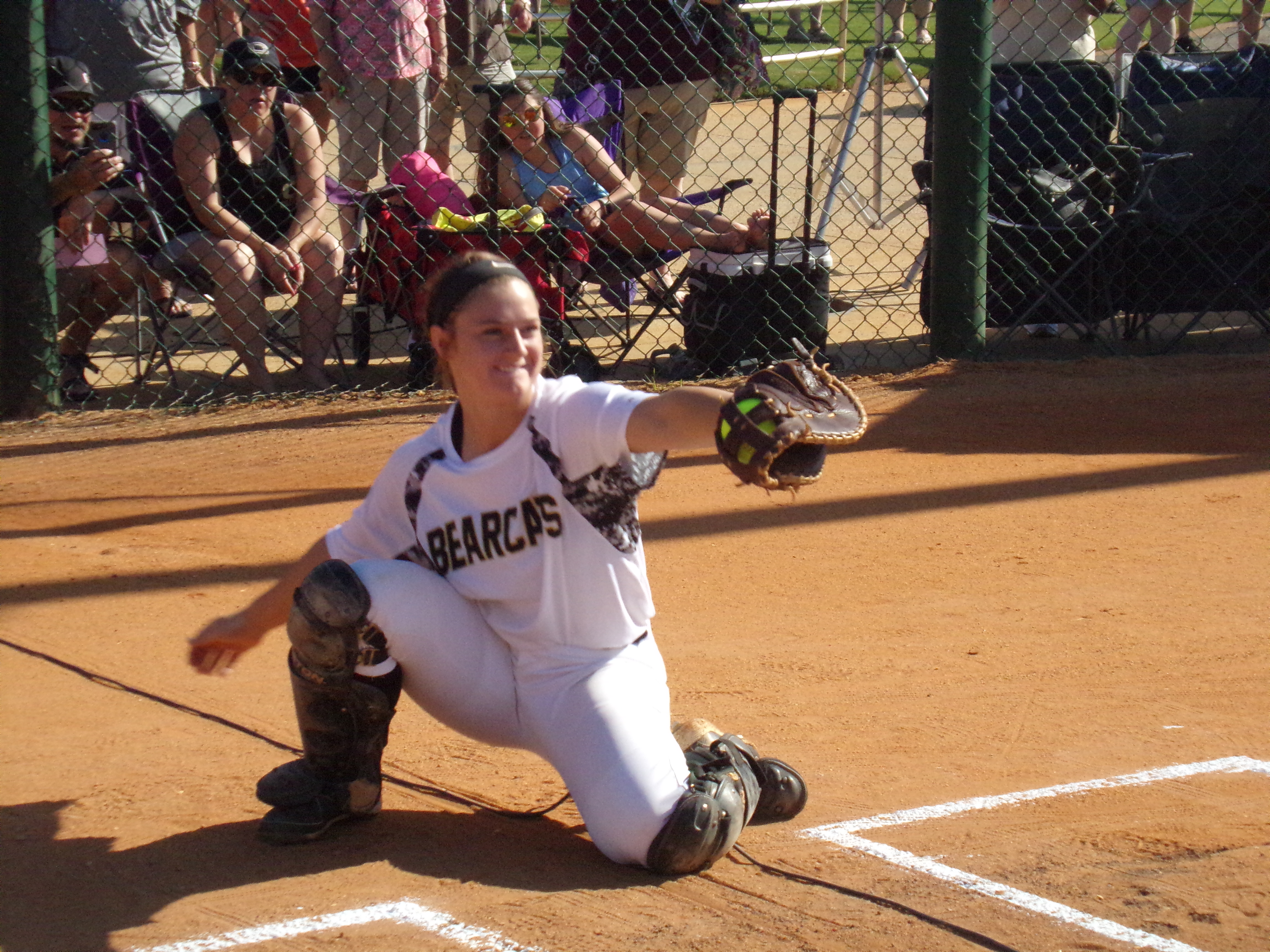 Bailey Swann catches the ceremonial first pitch prior to start of Cullman/Daphne game.

MONTGOMERY – The momentum Cullman softball brought from the North Regional last weekend didn't stay with the Lady Bearcats in the AHSAA Class 6A state tournament Wednesday.

Cullman was the first to be eliminated from the Elite Eight, losing 9-4 in the opener to Daphne, then suffering a 9-1 defeat in the afternoon to Helena.

This was Cullman's third consecutive appearance in the state title series. A year ago, Stephanie Conner's Lady 'Cats were fourth. They finish 2017 with a 30-21-1 record.

Cullman played well through five innings against Daphne, leading the South Regional champion 3-1. Meredith McPherson gave Cullman a 1-0 lead when Hannah Morton scored on her grounder to short by beating the throw to the plate.

A run-scoring single by McKensi Burks sent in Bailey Swann, then Morton ripped a double down the left field line and Burks dashed in for a 3-0 lead in the fifth.

The pivotal moment for Cullman was leaving the bases loaded in the fifth with a three-run lead. Daphne’s Makenna Pierce caught Kennedy Wren off guard with a curve ball for strike three to end the inning.

The game changed in the sixth when the Trojans began to make contact on Sierra Easterwood's pitching. Three singles to begin the sixth were followed by a fielder's choice that produced a run to close the gap to 3-2.

The turning point came when Laney Cox stepped up and hit a grounder to short. The throw went awry toward home, then a relay throw to second sailed into center field. Four runs crossed home on the two throwing errors and Daphne moved on top 6-3.

Four batters later, Kennedy Cronan blasted a two-run homer and put the game out of Cullman's reach. In all, the Trojans scored eight runs on six hits and two Lady Bearcat errors. Daphne carried a 9-3 advantage to the seventh.

Cullman managed to score a run on a two-out single by McPherson. But the game ended for Cullman when Kennedy Wren popped to short with two runners on base.

A potential major upset by the Lady Bearcats became a heartbreaking loss. Daphne could only produce four hits against Easterwood through four frames with the right-hander striking out five and getting a big out when Swann threw to Faith Guest covering second, picking off MC Sweatt in the second inning.

Sophomore pitcher Avery Barnett was stout for Helena, retiring the first nine Cullman batters before a walk to Easterwood leading off the fourth for the Lady 'Cats’ first runner of the game.

The fourth became short-lived when Swann was called out for stepping out of the batter's box on a bunt attempt and Burks lined to center field for an inning-ending double play.

Helena got a 1-0 lead on a second-inning home run from Mekhi Mayfield. Mayfield drove in a run in the fourth on a double with two home runs later in the game, putting the contest well in control for the Lady Huskies.

Katie Lively went deep with a two-run homer in the fifth and a three-run shot by Torie White raised the score to 9-0.

Tiffani Schwaiger broke up Barnett's no-hit bid with a one-out single in the fifth. But the Lady 'Cats were unable to get productive, with the next two batters being retired.

Helena coach Heidi Kouveras made a pitching change in the seventh. Lively replaced Barnett as Burks led off with a walk. After Morton was retired, Schwaiger doubled to right, scoring Burks.

Lively got McPherson on a grounder to second and sent Helena to a 6 p.m. game when Wren grounded to second for the final out.

Cullman's bats were never able to get into the groove the Lady 'Cats experienced last Friday in a 10-7 win over Athens when they produced 15 hits, punching their ticket to Montgomery.

Helena allowed two hits after they produced seven in the loss to Daphne. Schwaiger batted .500 on the day at Lagoon Park, going 3-for-6 in the tournament with a run batted in.

Senior Olivia Schwaiger made the trip to Montgomery to support the team. She is recovering from a concussion sustained last Thursday in the North Regional against Athens. She was in the dugout during the games and took part in the pre-game ceremony prior to the beginning of the 2017 event at 8:30 a.m.