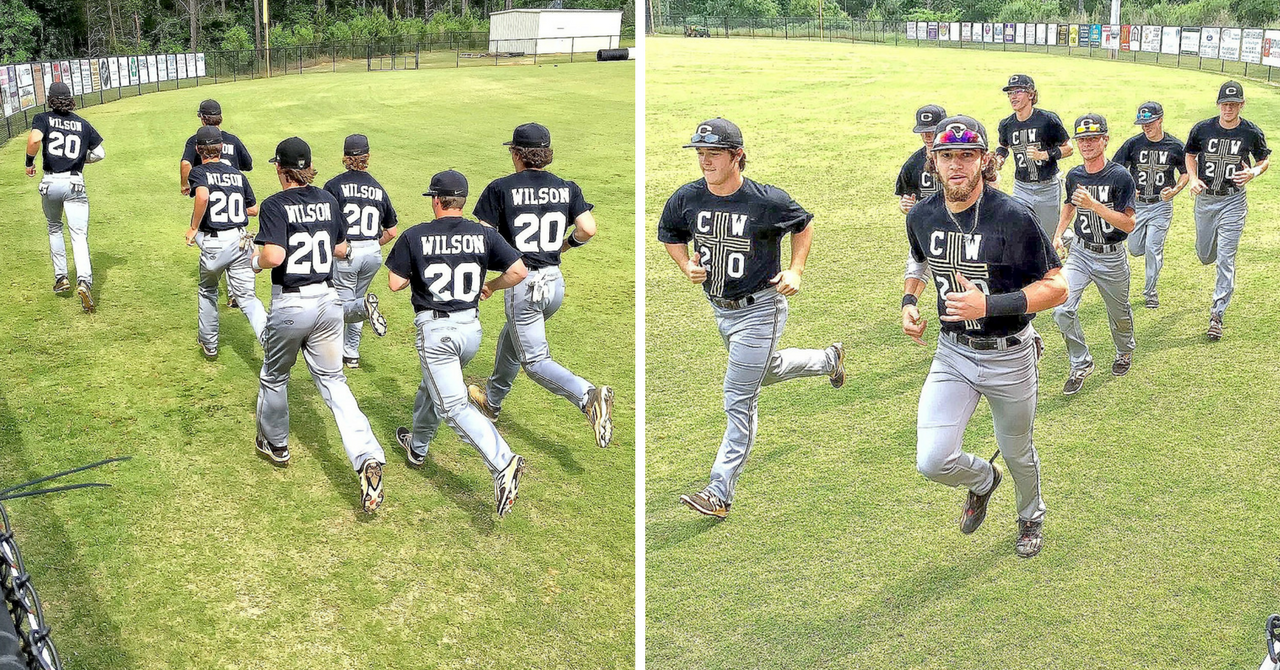 The Cullman Bearcat baseball team wears jerseys in memory of JV player Curt Wilson, who died last Sunday as a result of a car accident.

HUEYTOWN – Extra inning baseball inspired the Cullman Bearcats Thursday night to punch a ticket to Montgomery for the third consecutive year competing in Class 6A of the Alabama High School Athletic Association. (Fourth consecutive year in all)

The triumph followed an 8-1 win in the opener with Heatherly overpowering on the mound and solid hitting throughout the lineup; first baseman Trent Price set the tone from the sixth position in the batting order.

Cullman is 8-0 in the playoffs, 37-7 overall. The Bearcats will play May 18-19 against the winner from the South region between defending state champion Hillcrest-Tuscaloosa and Helena. The games will be at Patterson Field in Montgomery.

Game 1
Cullman trailed 1-0 in the second on an error that allowed Hueytown to move a runner into scoring position and get him home on a ground out.

After that, the Bearcats were as fined-tuned as they have been all during the postseason.

Cullman manufactured a run in the third on a sacrifice fly by Jacob Heatherly. Price came through moments later with the clutch hit of the inning, a two-run single, and the Bearcats were in front 3-1.

Wheeler Eastman was next and delivered a run-scoring single to make it 4-1. The Bearcats then played basic baseball, led by Heatherly's pitching, good defense and crucial hits to put the opener out of reach.

Price and Eastman collected doubles that enabled the Bearcats to move the lead to 5-1 in the sixth. Ben Smith executed a squeeze bunt to perfection with another run heading home and a 6-1 advantage.

Owen Lovell doubled in the seventh, then scampered home on an error as Cullman's lead grew to 7-1. Price produced his third run driven in on a double with the Bearcats now in command at 8-1.

Heatherly got his fourth win in the playoffs, allowing an unearned run and surrendering four hits. Cullman's pitching has yielded just five runs in 45 innings in the playoffs, entering game two of the semifinals.

Game 2
Early momentum lifted the Bearcats in the nightcap, getting on top 1-0 in the bottom of the first on Heatherly's grounder to third that drove in Noah Fondren.

Levi Thomas took that to the mound and stayed in front before Hueytown scored a couple in the fifth inning on a pair of singles and led for the first time at 2-1.

Cullman stayed calm under pressure. Caleb Lipsey tied the game with a sac fly in the sixth. Hueytown reclaimed the lead in the top of the seventh, scoring against Bearcat reliever Kade Williams.

Heatherly delivered from the plate with an RBI single in the seventh. Cullman had a chance to win, but Price lined to left field with Lovell thrown out trying to score, sending the game into extra innings at 3-3.

The pitching and defense stepped up in the eighth and ninth innings, allowing the offense to make plays when needed to put away the sixth-ranked program in Class 6A.

Heatherly doubled and headed for home on Eastman's clutch hit to complete the hard-fought sweep in an emotional week for the ball club, after the passing of JV player Curtis Wilson last weekend as a result of an automobile accident.

Cullman won the 6A state championship in 2015, the first time they played in the 6A classification after a long stint in 5A. They lost in the finals last season to Hillcrest.

Now the No. 1 team in 6A baseball has the golden opportunity to show everyone in Montgomery how great they are on the diamond.