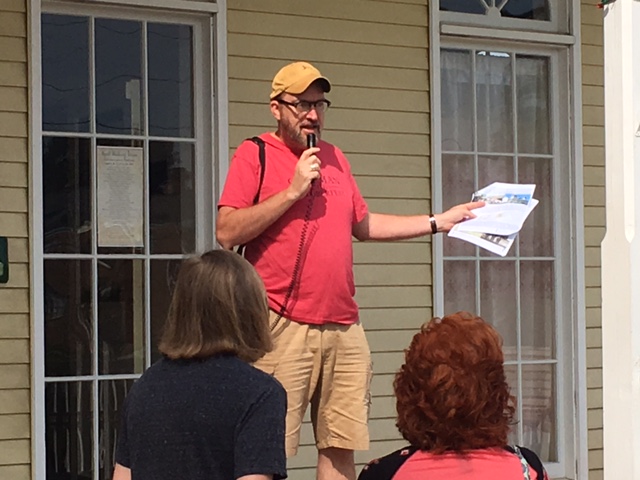 CULLMAN – As part of Alabama’s bicentennial celebration, Cullman is one of 25 cities around the state hosting Saturday walking tours during April.  At the midpoint of the program, the Tribune checked in at the Cullman County Museum, which hosts and serves as the starting point for the tours.

Greg Richter, who has led tours for more than five years, was Saturday’s guide.

“I’m a person who wishes I lived in the past,” he said.  “We’re going to walk the streets and look at all the historical stuff, and talk about the history of Cullman as we walk.  We’re going to hear about historical events that happened at certain spots.”

Richter likes to point out visible things that have stories, like Sacred Heart Church’s German stained glass windows that were buried underground by their manufacturer to protect them from damage until they could be shipped to the U.S. after World War I.

The museum’s Drew Green explained that the program has been going well.

“It’s been pretty good.  The first group we had was over 50, and last week we had over 30.  We have a different leader each week that has some connection to Cullman.  Greg is from the old Richter family.  He’s been leading our tours for several years, so he has a lot of good insights and inside stories.  The next one is Caroline Peinhardt Johnson; she’s from the Peinhardt Farm family.  And the last tour, Ben Johnson is going to do it; he’s written some plays, and his dad was the first president of Wallace State.”

Tours continue the next two Saturdays, rain or shine, meeting at the Cullman County Museum at 10 a.m.  Also on tour days, the museum offers free admission.