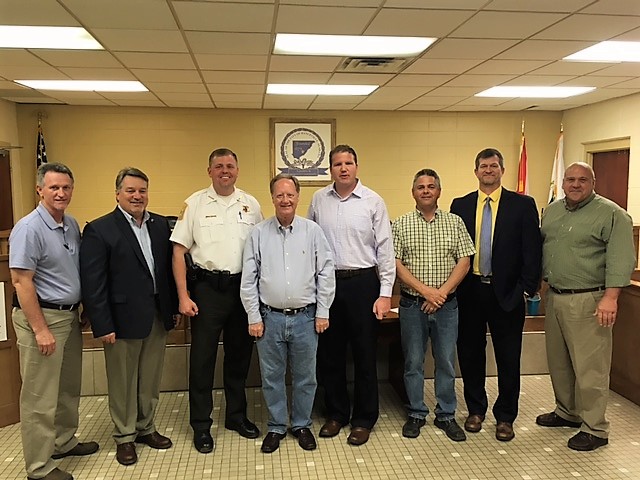 In the front of everyone’s mind were the momentous events of the day in Montgomery.  Shedd was the first to address Gov. Robert Bentley’s resignation.

“It’s a day that we have a new governor (Kay Ivey).  I was in Montgomery today; it’s a sad day, but it’s a day we need.  The time had come- way past the time, I felt like.  Rep. Harbison and I on Feb. 13, I believe it was, we made our decision.  When we came out, we felt the process was stalled; and we felt like somebody had to say something about the situation.  And, frankly, people all over the state told us, ‘Y’all said what was on our minds.’”

Shedd and Harbison co-sponsored the legislation that revived the movement to impeach former Gov. Robert Bentley.  Shedd pointed to two incidents that prompted their decision: Bentley’s transportation of his former mistress and her husband to the presidential inauguration aboard a state plane in January, and the appointment of Luther Strange to fill Jeff Sessions’ vacated U.S. Senate after Strange (then Alabama Attorney General) stopped the state’s investigation into Bentley.

“That’s just more than I could take,” said Shedd, “because it gave the appearance of a deal; and that’s just not the way it’s supposed to work.”

Ledbetter added, “Last year, it (the governor’s scandal) didn’t affect what we do; it really didn’t.  But this year, it sucked the life out of the process.  We’ve spent more time dealing with this than passing bills and making legislation to make Alabama great.  It just hasn’t happened.  It’s a new day.  When we start tomorrow, it’s a new day.”

Harbison concluded the legislators’ discussion of the governor’s scandal, “I do hope that, after today, some of this stuff can be put behind us, and we can move on; because we do have a lot of issues that we need to handle.”

The legislators called for people to pray for the former governor, and voiced commitment to the process of rebuilding citizens’ trust in the government of Alabama.

During individual addresses, and during the following question and answer time, officials addressed several issues.

After talking about the good relationship between the sheriff’s office, local communities, and the other two law enforcement agencies in the county, Gentry addressed the ongoing issue of mental health.

“We face a lot of things we didn’t face years ago,” began Gentry, “and Chief Long (Hanceville Police Chief Bob Long) and all these guys here can tell you: mental health.  You know, we deal with mental health every day.  In the last two and a half years, we’ve been in five standoffs with mentally ill individuals.  The money’s been cut; there’s nowhere to send people for long-term treatment.  There’s no way to get them help, because we deal with it every day.  There’s things that they’re facing every day that we’ve never faced before in society.”

Shedd, during the open floor portion of the meeting, stated that mental health is an important issue, and that the change of administration should create more opportunities to address the matter.  When asked if any mental health legislation is actually on the docket for this session, the three legislators admitted that they did not know of any; but they reiterated their hope that the new administration might create more opportunities for discussion of the issue. Ledbetter spoke briefly about the possibility of a secure mental health facility to remove mentally ill persons from the prison system.

Gentry shared, “As I talk to other sheriffs, they’re always like, ‘How, in Cullman County, do y’all make so many drug arrests?’  And I say, ‘I’ll tell you this: we’ve got three good law enforcement agencies.’  You’ve got the Sheriff’s Office, Hanceville Police Department and the City of Cullman (Police Department).  Law enforcement, as a whole, care about their community.  We want drug dealers out of our community.  That’s why you see all those agencies making arrests; we’re putting drug dealers behind bars.  We don’t want them here.  That’s why we average 360 people in our jail right now.”

The sheriff also commended his department’s monitoring of registered sex offenders, noting that deputies made more than 3,000 home checks last year, compared to averages in the 300s in years gone by.  He further spoke with pride of the department’s work release program, noting that inmates are leaving with life skills and job skills, and that the program has paid more than $1 million in victim restitution.

Gentry opened the discussion by voicing his support for Senate Bill 24, which would allow citizens without criminal records to carry concealed firearms without the need for a permit.  Permits would still be sold, for people who wish to buy firearms without a waiting period, or those who want to carry their firearms across states lines.  Gentry is one of only three Alabama sheriffs who support constitutional carry.

All three legislators indicated that they plan to support the bill if it comes to the House.

Long voiced his opposition to the bill, arguing that it would take away police officers’ ability to disarm people who have not committed a violent crime yet, but who are behaving in suspicious ways.

During the open floor portion, the question came up again.  The legislators again voiced their support, and said that the bill has good chances in the legislature.  They also stated, though, that they did not know what Ivey’s position would be.

Barnette touted the achievements of the county school system, noting recent achievements and ongoing programs that are gaining national attention for the system.  He took time to talk about the relationship between the system and Wallace State, and the kinds of opportunities that exist for vocational students and those studying fine and performing arts.

The three legislators returned to the front to make a lengthy joint presentation promoting a fuel tax to support road maintenance.  They and Marchman talked about the extensive number of miles of paved roads in Cullman County, noting that it has the third highest number of miles in the state.

Marchman had earlier spoken in opposition to the proposed fuel tax, during his remarks.  He said that, though he had earlier supported the tax, he felt a lack of trust in how the state would handle the money.

“People are going to go against a tax every time,” he said, “until they trust what you’re doing.”

Marchman renewed his attack on the proposed tax, stating that when the state turned roads over to counties years ago, it failed to turn over the funds to maintain those roads.

“Right now, the state collects 17 cents per gallon of gas that’s sold here in Cullman,” argued Marchman.  “You know what the county gets?  We get a portion of one cent that comes off the gas tax.”

After a brief change of topic, Ledbetter returned to the fuel tax issue, pointing again to infrastructure needs and saying that the current road system is hurting economic development in the state.  A lively but friendly debate ensued between the legislators and Marchman, who called instead for a local tax that would stay completely in Cullman County.

The two sides did not come to a consensus on the tax, but did agree on the need for funds to be generated to support road systems and infrastructure.

During the open floor portion, several other issues were presented and received brief attention, including: