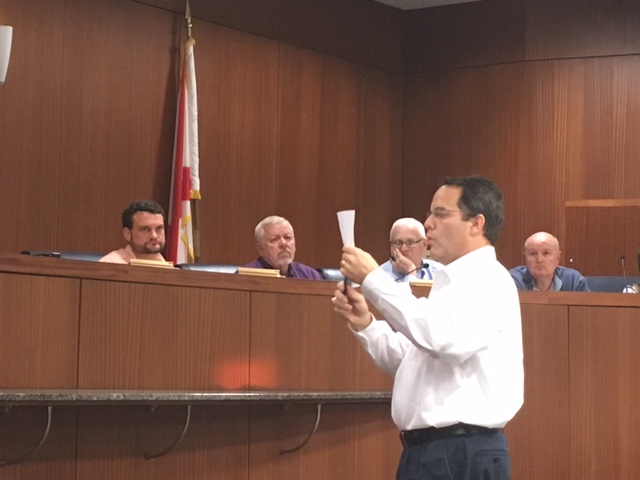 CULLMAN – On Monday afternoon, the City of Cullman Planning Commission met at Cullman City Hall, with four topics on its agenda, including a proposed site plan for the long-rumored Academy Sports + Outdoors store.

Tim Hodes, representing Academy Sports, addressed the commission and answered questions about the property layout and design.  Responding to concerns about the removal of a small berm on the site (with possible impact on landscaping and drainage), he explained that the area will be landscaped.  Staffers from the public works department, as well as Mayor Woody Jacobs, spoke up to say that the issue with the berm had been studied, and was not as crucial a matter as originally assumed, and that the change would have no detrimental effect on the site or area around it.

The commission also pointed out that no valid survey has been submitted to show the exact location of the building.  The survey that was submitted would have been valid, except for the lack of a surveyor's stamp/seal that is required by the state.  The developer must have that survey stamped and resubmitted.

Questions were also raised about a street the developers have said they will build.  The lane between ALDI and the store site, which is currently used to access parking, has been proposed for modification into a street by improvements including paving, paid for by the developer.  Jacobs said that City personnel have visited the site and taken borings that show that, with the proposed improvements, the lane can be made into an acceptable street.  The street development, according to the commission, will also need to include a turnaround for emergency vehicles in the form of a cul de sac or t-shaped "hammerhead."  The commission and Public Works Department both expressed a preference for a cul de sac, based on safety concerns, but the final design will depend on conclusions about the potential impact of the larger cul de sac on other site features like a drainage pond.  Commissioners also pointed out that the site design will have to include sidewalks, if the lane is developed as a street.

A motion was made to approve the site plan, contingent on the stated issues being properly resolved, and passed unanimously.

A request was brought to revise a previous site plan for development of a former bank property at 223 Second Ave. SE.  The revision would add three drive-through teller lanes in the covered parking lot.  With no negative issues recognized by any city department, the revision was approved.

Drinkard Development requested a change to its plan for the Patriot's Way site where Milo's is to be built.  The company had originally included stormwater drainage in its plan, without knowing that the site already had piping in place.  The request to omit the drainage from the Drinkard plan and use existing city drainage passed.

Conditional use request for 1877 Cherokee Ave. SW as a physical therapy clinic

A conditional use request to develop a site at 1877 Cherokee Ave. SW as a physical therapy clinic was reviewed.  No negative issues were noted, and commission members pointed out that other medical services are offered in the near vicinity.  The request was approved.