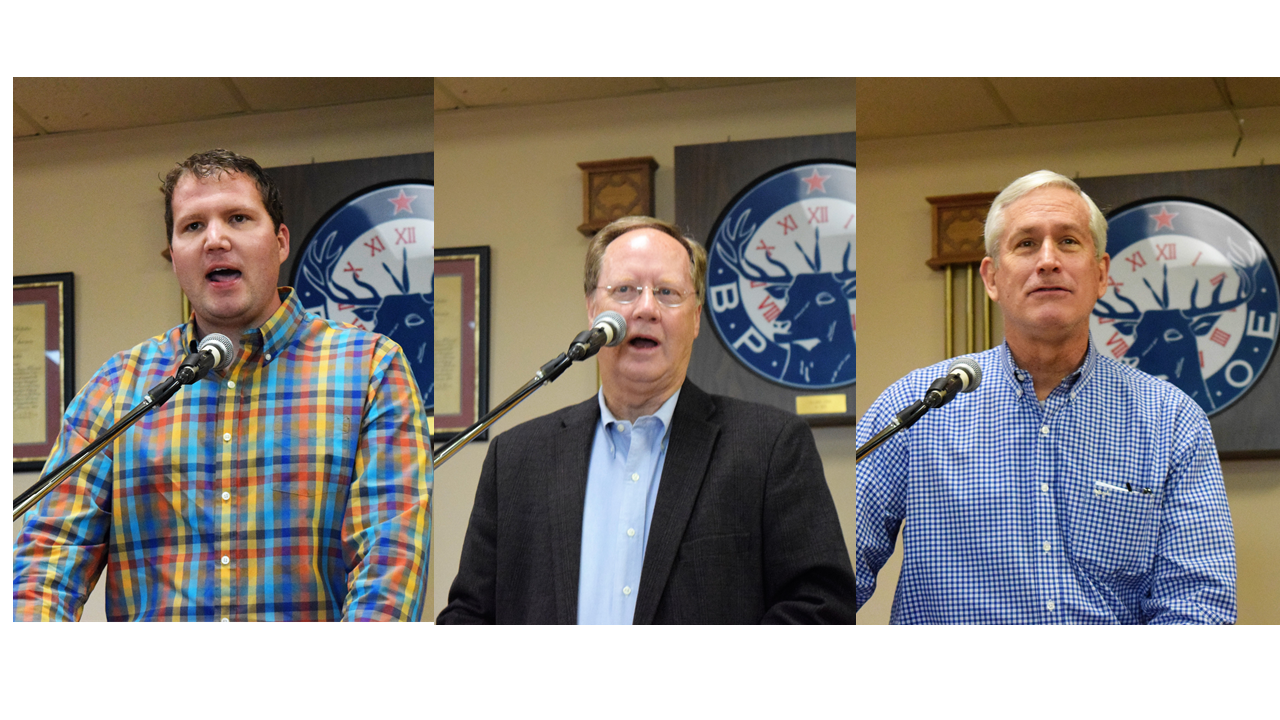 CULLMAN – Members of Cullman’s legislative delegation to Montgomery were among the special guest speakers at Saturday’s Cullman County Republican meeting. The trio, Sen. Paul Bussman, R-Cullman; Rep. Corey Harbison, R-Good Hope; and Rep. Randall Shedd, R-Fairview, spoke about what they have in mind for the upcoming legislative session, which begins Tuesday, Feb. 7. Ambitious goals were set, but are they achievable?

Harbison spoke first. The former mayor of Good Hope was elected to the Alabama House of Representatives in 2014. He represents Alabama House District 12.

Harbison began by saying he hopes to avoid costly special sessions of the legislature during this session. However, he noted, “Us as legislators can’t control that; when the governor calls a session, we go.”

He moved on to what he knows is expected during this upcoming session. Prisons are going to be big, according to Harbison. He then addressed the coming crisis of Medicaid funding in the state, “They requested more money than what they said they needed.”

Concluding his speech, Harbison spoke on what’s on the mind of Republican legislators, and many Republican individuals throughout the state—sanctuary cities. The Birmingham City Council on Jan. 31 unanimously passed a resolution declaring Birmingham a sanctuary city; According to Birmingham's WBRC FOX6 News, the resolution marks the council taking a position on immigration issues following the recent Executive Order issued by President Donald Trump that puts a temporary travel ban on citizens traveling from seven Muslim-majority nations to the U.S. Though the resolution passed, it does not create policy and is not law in the city, only a statement of support.

Birmingham strives to be a community "free of hostilities and aggressions," the city council’s resolution read. The Birmingham City Council says Birmingham has committed to be "a community free of prejudice, bigotry and hate.” Harbison pledged to support legislation to cut all funding to the city or other institutions that declare themselves a sanctuary.

The next speaker was Shedd, who was elected to the House following a special election in 2013. Shedd served as Cullman County Commission Chairman from 1977-1985, and mayor of Fairview from 1996 until 2012. Shedd represents Alabama House District 11.

Shedd’s main goal in this session, as it is in all of his sessions, he says, is to restore and strengthen trust in state government. “We’re looking for ways to demonstrate to the public that state government, and the state legislature in particular, is trying to do things to (improve) transparency and integrity,” said Shedd.

Shedd drew a line in the sand when it comes to Alabama Ethics laws. “I have said time and time again that we cannot do anything to mess with the ethics laws. It gives the public the indication that just because one of our own got caught in it, we’re going to change things,” he said.

He concluded by focusing on the issues of controlling state spending by having allies in Washington. “Often when we try to control spending, we cannot because of the federal government,” said Shedd, who says he believes those issues will be addressed by Congress in the near future. “We have friends and allies in Washington that feel like we do when we try to contain spending in Montgomery. We look forward to having that favorable situation in Montgomery.”

Last up was Bussman, who Alabama Senate District 4, which covers all of Cullman County, the majority of Laurence County, the northern half of Winston County and the eastern half of Marion County. Bussman was first elected in 2010.

Bussman is entering this session with optimism. He echoed Shedd by reiterating that Alabama has a friend in Washington.  Bussman says that the governor will be pushing prison reform in the form of spending $800 million dollars on building four mega prisons.

Bussman says he is fully supportive of increasing spending toward mental healthcare, and sentencing reform; however, he is not in favor of freeing non-violent drug offenders and legalizing marijuana in order to reduce Alabama’s prison population.

When asked if his reform would include job training of prisoners to reduce recidivism, Bussman responded, “We have to provide job training, education and a way for them to be reincorporated into society; if they don’t, they’ll be back in prison.”

Further items on the State Republican Party agenda include a mandatory civics exam for high school students and forensic audits on state agencies.