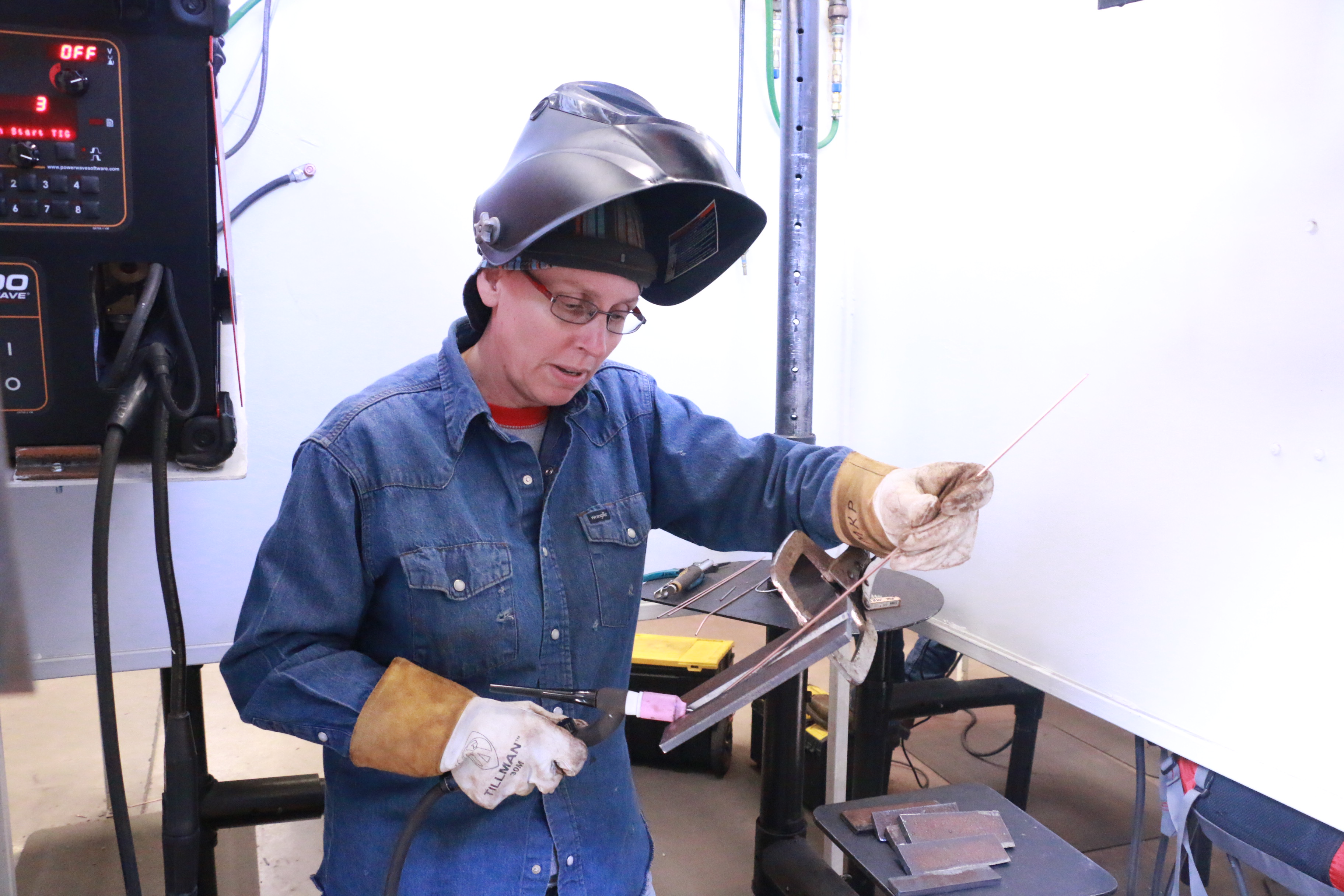 Melanie Patterson worked in the newspaper industry for 20 years before deciding to enroll in Wallace State’s Welding program in 2015.

HANCEVILLE – Maci Key wasn’t sure of the career field she wanted to pursue until Wallace State’s Jonathan Minyard visited her high school to discuss the college’s Machine Tool Technology program.

Meanwhile, Melanie Patterson was ready for a new challenge after working nearly 20 years in the newspaper industry.

Key and Patterson both decided to pave a unique path as women enrolled in Wallace State’s Technical Division programs and haven’t regretted the choice one bit.

“I was fascinated by the things Mr. Minyard showed us when he visited my high school. He showed us the different items the program had made, and I was impressed with the attention to detail and how they could take a piece of metal and make something so defined and small,” Key said. “I was still trying to figure out what I wanted to do and decided to take a stab at machining. I fell in love with it the first day I walked through the doors.”

Key had no reservations joining a program and profession traditionally dominated by males. Since she began at Wallace State, a healthy rivalry has developed between Key and her male classmates.

“Of course, I get picked on a lot, but it’s all in good fun. If I do anything embarrassing, the guys are definitely going to point it out,” Key joked. “They also don’t like it when I do things better because it makes them look bad.”

Salon and Spa Management, formerly Cosmetology, has traditionally been one of the technical programs most popular among women. Programs like Engineering Technology and Culinary Arts are increasingly popular among both men and women. But other programs, like Machining, Diesel, Welding and the Automotive Technology and Collision Repair have been slower to attract women in large numbers.

Key and Patterson are among the female students at Wallace State bucking the trend.

“It is always special to watch people who are able to fulfill their passion and even more enjoyable when it’s something you see that goes against the grain or what you might expect. It’s gratifying to see females succeed in fields not normally dominated by that gender. It proves again that people can do what they really want to do as long as they set their mind to it,” said Jimmy Hodges, Wallace State’s Dean of Applied Technologies. “I love seeing the females in our programs capitalize on the opportunities presented.”

Added Key: “I think me being in this program shows that it’s all right to step out of the box and try something others may not think we should try. I think women can fit into the technical programs well because they are more detail-oriented than men.”

While Key is in the early stages of her collegiate career, Patterson is nearing completion of her second act at Wallace State.

Patterson, 42, gained nearly two decades worth of experience in the newspaper industry, fulfilling a variety of roles at stops in Cullman, Gardendale and in multiple cities in Colorado, before determining she needed a change in life. Patterson, who also served in the Army Reserve as a military journalist before beginning her newspaper career, chose to enroll in Wallace State’s welding department in the fall of 2015.

Patterson, a Fairview native, wasn’t initially sure which Wallace State program she wanted to enroll in until talking with welding instructor Jim Thompson.

“I wanted to do something different for a long time. When I was a reporter, I loved human interest stories and I would go out and interview mechanics, welders, carpenters or people who worked with their hands and thought how it would be neat to do those things. I loved their environment,” Patterson said. “I looked at the programs at Wallace State and welding did stand out the most, but I wasn’t convinced until talking with Jim. I got into it not knowing if I would truly like it or not. I came in for one semester and told myself if I hated it, there wasn’t too much lost. I absolutely loved it and have ever since.”

Patterson is on track to graduate in May with her degree in welding, making a rare transition from a career in journalism to welding.

Patterson was one of three females in the welding department during the fall semester, and like Key, isn’t uncomfortable pursuing a male-dominated profession.

“I haven’t had a hard time at all. I sort of expected to, but it hasn’t happened whatsoever. It may actually be easier being a female because I’m not expected to know as much as a male might know. I can get away with a dumb question here or there and not get ripped for it,” Patterson said. “I’ve never felt like I’m judged in this program and don’t feel like less or more is expected of me. I feel like I’m on equal footing. I’m a better welder than some people, and I’m a much worse welder than some people. I just try to do my personal best.”

Patterson added that she pondered a welding career upon graduating high school in the 1990’s, but decided to pursue a more conventional career for a female at the time.

“Things are different. There is probably more acceptance now of a female in welding than there might have been 20 years ago. It doesn’t matter who you are. The best thing you can do is follow your dreams and heart and do more than what is expected of you,” Patterson said.

Maci Key works on a machine in the program: