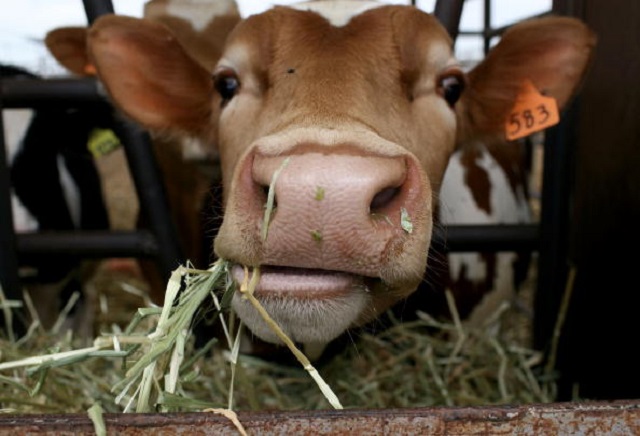 Applications for hay relief from the Cullman County Conservation District will be accepted until 4 p.m. next Tuesday, Jan. 17.

CULLMAN – 2016 was a hard year for cattle farmers in Cullman County.  Lower livestock prices meant farmers had less money to spend; and a lack of hay, driven by drought and army worm infestations, meant they had to spend more.  For the number one cattle producing county in the state, that's a big problem.

At the December 2016 meeting of the Cullman County Community Development Commission (CCCDC), County Commissioner Gary Marchman explained that cattle farmers were having to purchase much more hay than they normally would, since their own pastures were not producing.  In many cases, they had to go outside the county, paying transportation fees that made the cost prohibitive.  As a result, some area farmers were simply giving up and selling their herds and farms.

A brief survey of farm properties for sale in Cullman County did not reveal specific numbers, but showed cattle farms currently for sale around Cullman, Good Hope, Vinemont, Holly Pond and Logan.

Marchman requested and received a $12,000 grant from the CCCDC to pay for the transportation of hay into Cullman County.

On Monday, the Cullman Conservation District office began signing farmers up for hay relief.  According to spokesman Travis Kress, hay will be available on a first come-first served basis at a projected cost of $30-40 per round bale (depending on cost from suppliers).  The amount represents actual cost plus a small handling fee that will go right back into the program to purchase and transport additional hay.  Grant funds cover all transportation costs to get the hay into the county.

Enrollment began Monday morning; by mid-afternoon, Kress had already received 54 applications.  Applications will be accepted until 4 p.m. next Tuesday, Jan. 17.  Once applications are approved, rationed amounts of hay will be distributed, to ensure that as many farmers as possible are helped.

For more information or to apply, contact the Cullman County Conservation District office at 256-734-1431.