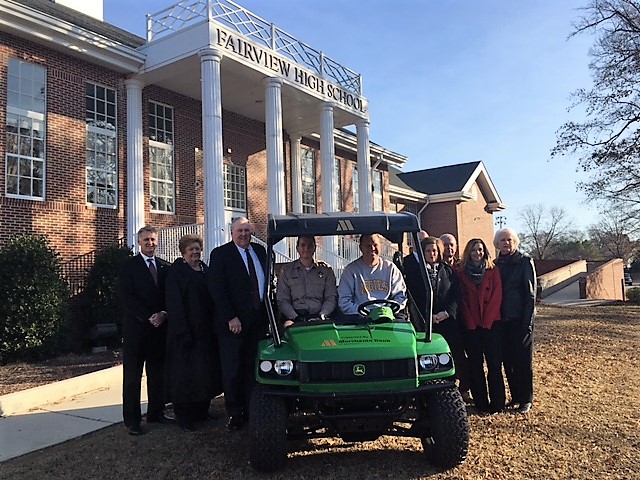 FAIRVIEW and HANCEVILLE – On Thursday, representatives of Merchants Bank visited Fairview High School and later met with staff from all three Hanceville schools to deliver John Deere Gator ATVs the organization has donated to the schools.

According to Merchants Bank Vice President Eric Laney, the bank is an "adopt-a-school" sponsor for Fairview and Hanceville.

Bank President Charlie Nesmith said, "A lot of businesses adopt a certain school.  We've just adopted all of Fairview and all of Hanceville."

Hanceville Branch Manager Sandy Parker noted that this partnership has existed since the very beginning of the Adopt-a-School program more than 20 years ago.

How will the schools use their Gators?

According to Fairview High School Principal Dr. Chris Gambrill, their Gator will be a multi-purpose tool.

"I think there's unlimited purposes it could be used for," he said, "on football games, helping with some of our elderly or people with some physical difficulties; daily around the school, our Resource Officer patrolling the campus.  Just basic stuff that we've been needing, but just haven't had the funds to do so."

According to Hanceville High School Principal Jimmy Collins, it will be shared by all three city schools, being used during school hours by Resource Officer Chad Whaley.  He said, "He can drive it all around campus, because we are a big campus.  We have three schools on one campus."  In the event of an emergency, he continued, "This will help him get from point A to point B a lot faster."

After school, Hanceville's Gator will be used by the band and athletic teams for field maintenance and equipment transport.

During the Fairview ceremony, Gambrill personally went around to shake hands and thank the bank representatives present.

He said about being informed of the gift, "I was almost like a little schoolgirl; I almost started crying.  We need it.  We would never buy it, but it will be worn out, I promise you.  It's just great!"

After the ceremony, Gambrill expressed his appreciation for the gift and its givers.  He said, "I want to make sure that Merchants Bank gets all the thanks and the gratitude that we have.  This is totally unexpected, but we're honored that they're our Adopt-a-School (partner), so I want to make sure they get all the credit they deserve."

Later in the morning at Hanceville, Collins expressed his gratefulness to Merchants Bank "for the Gator, number one, but really all the other things that you guys do…If we ever have a need, you guys are always there for us, and we really, really appreciate that."

After the ceremony, he commented to the Tribune, "The partnership we have with Hanceville Schools and Merchants is just fabulous.  It's an unbelievable corporation that helps out us and Hanceville schools.  They help us out tremendously."