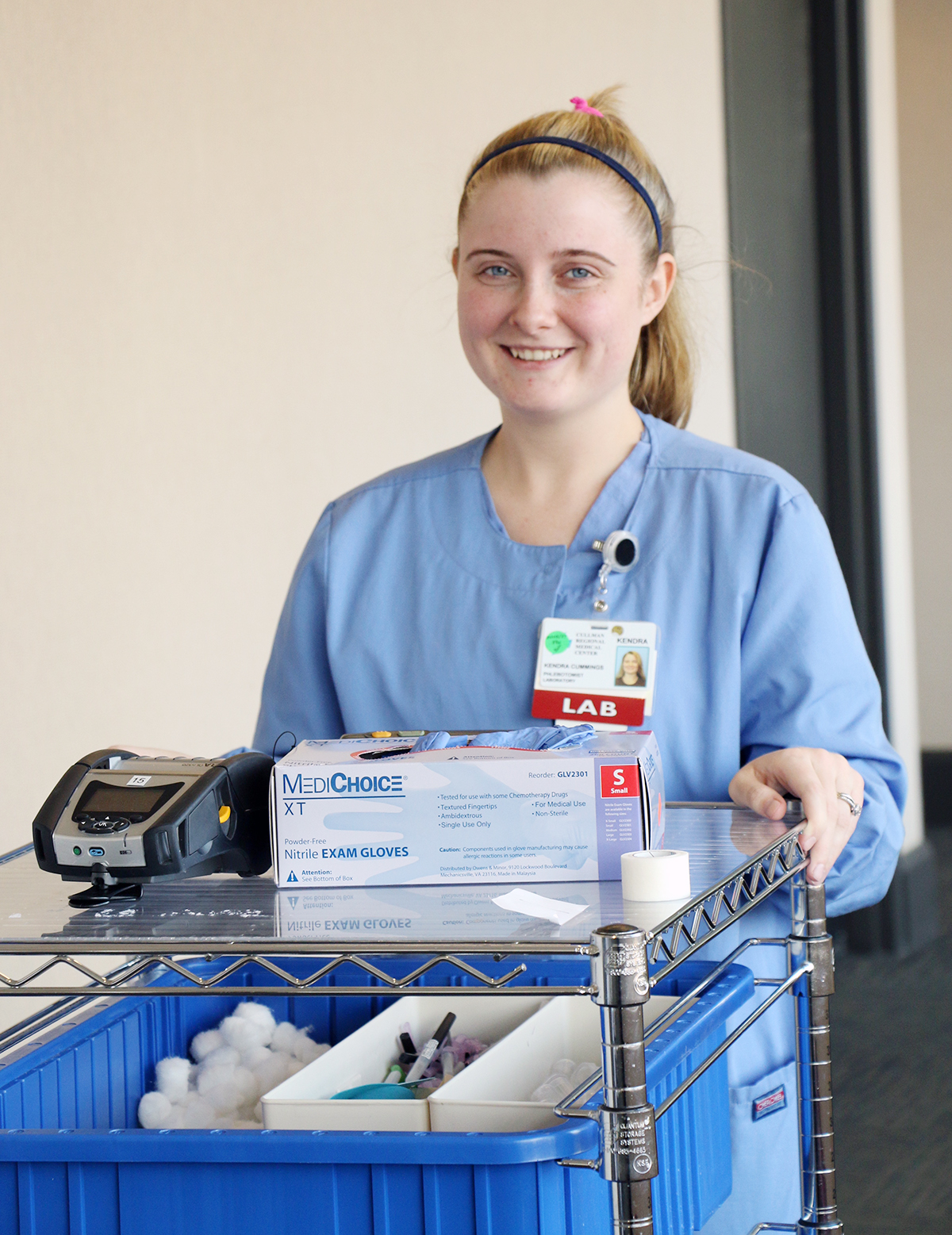 HANCEVILLE – Kendra Cummings of Baileyton once had a fear of needles. But the 2014 graduate of Vinemont High School found a way to overcome her fear and found a career as a phlebotomist.

“I took the program so I could get over my fear of needles and ended up getting a job,” said Cummings, who earned her certification as a phlebotomist after completing the seven-week course in the subject through the Wallace State Community College’s Continuing Education program. She took the course shortly after graduating from high school and, after waiting for the right position, started working at Cullman Regional Medical Center about six months later.

“I was a picky about where I wanted to go to work,” she said. “I wanted it to be in Cullman.”

Cummings said the length of the seven-week phlebotomy program was one of the attractions to the program. “It was only two nights a week, so it made it very easy to still have a job and everything,” she added.

And the job has its own advantages, said Cummings, who works the early morning shift. That leaves the afternoons free to do other things when she gets off of work. She also likes getting to meet and interact with patients and their families.

A lot of her work is completed within the first three hours of her shift; so that blood samples she draws can be run in the lab and results are ready for doctors as they come in to check on patients. “Then I just wait for my PDA to go off, to tell me who to stick next,” Cummings said.

She said her own fear of needles has helped her be more empathetic toward her patients who share that same anxiety. Plus, her training helped her know to explain what she’s doing as a way to calm a patient’s fear.

After a few more years as a phlebotomist, Cummings said she plans to return to Wallace State to enter the Diagnostic Imaging program, using what she’s learned in training and on the job to help her through the program.

Bonnie Brannan, Point of Care coordinator at CRMC, is Cummings’ supervisor and was her Phlebotomy instructor at Wallace State. Cummings is just one of several students she’s hired over the years.

Brannan said the seven-week course begins with coursework and simulated training before students begin practicing on each other. Finally, the students spend 40 hours in clinical externships. “They have to have a total of 100 sticks and five finger sticks in order to qualify to take a national certification test,” Brannan said.

The average class size for the phlebotomy program is about 10 students per session, which allows for more one-on-one instruction. Brannan said students come from all walks of life, younger students right out of high school like Cummings, empty-nesters who are looking for a new career, students in other medical fields looking for certification to help them in their jobs, as examples.

Brannan said it is a good gateway program to other medical fields, such as medical laboratory technician and nursing. “A lot of them will have no healthcare experience whatsoever, but they really enjoy it,” she said. “Once they hit the externships, they always enjoy it, because it’s actual hands-on.”

Job opportunities for phlebotomists may not always be labeled as such, Brannan said. “Sometimes it’s a blended job,” she said. “You might have a lab assistant that includes phlebotomy, or an ED (Emergency Department) tech, those positions often include phlebotomy. So, I always encourage students, when they’re searching for jobs, not to narrow it down just to phlebotomy, because it can be blended in to other roles.” Phlebotomists can find jobs in doctor’s offices, urgent care facilities, hospitals and more.

The next Phlebotomy course is scheduled to begin Jan. 24. Classes are held on Tuesdays and Thursdays from 5:30 to 8:30 p.m. The tuition and fees ($1,599) for the program include the textbook and the certification exam fee.

For more information, contact the Wallace State Continuing Education program at 256-352-7826 or mandi.perkins@wallacestate.edu or visit www.wallacestate.edu/ce.