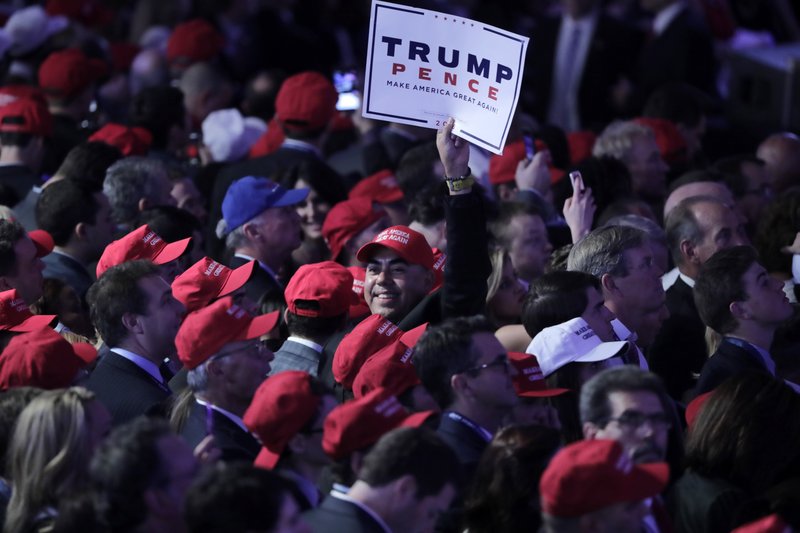 WASHINGTON (AP) – 2:29 a.m. Donald Trump has been elected president of the United States.

The Republican nominee won Wednesday after capturing Wisconsin's 10 electoral votes, putting him over the 270 threshold.

Voters eager to shake up the nation's political establishment picked the celebrity businessman to become the nation's 45th president.

Trump rode an astonishing wave of support from voters seeking change and willing to accept a candidate loose with facts and accused of sexual misconduct.

He upset Democrat Hillary Clinton, who would have become the first woman to serve in the Oval Office.

Trump struck a populist tone and placed a hardline immigration stance at his campaign's heart.

Trump rose to political fame after questioning whether President Barack Obama was born in the United States. He will now follow Obama into the White House.

Donald Trump has arrived at his election night headquarters after winning the state of Pennsylvania.

Trump's motorcade traveled from nearby Trump Tower to the midtown hotel where thousands of his supporters and hundreds of reporters are gathered.

Trump is expected to address the crowd.

Republicans have officially retained control of the U.S. Senate.

Republicans have a 51-47 edge in the Senate. Two races remain outstanding: In Louisiana, the seat will head to a runoff election next month. And in New Hampshire, Democrat Maggie Hassan and Republican Kelly Ayotte are locked in a too-close-to-call race.

Hillary Clinton's campaign chairman says it has nothing more to say even as votes turn against her.

John Podesta told a crowd in New York early Wednesday that with states still uncalled "we're not going to have anything else to say tonight."

Clinton trails in the Electoral College count and Donald Trump is close to breaking the 270-vote threshold to become president.

Podesta told the crowd Clinton "has done an amazing job" and "is not done yet."

Hillary Clinton has won the statewide vote in Maine.

Trump also won the remaining congressional district in Nebraska, which gives him another electoral vote.

Clinton now has 218 electoral votes. Her Republican opponent has 266, just four shy of the threshold needed to be elected president.

Donald Trump has won Pennsylvania and its prize of 20 electoral votes.

It takes 270 electoral votes to win the presidency. Trump's opponent, Hillary Clinton, has 215.

Pennsylvania last voted for a Republican for president in 1988. Trump repeatedly campaigned there, believing his populist message would resonate with the state's working-class voters.

Clinton long viewed the state as a key part of her "firewall" and rallied in Philadelphia with President Barack Obama on Monday night. The Democrats also held their nominating convention in the city.

She says, "The speaker congratulated Trump on his big night and also spoke with his good friend Gov. Mike Pence."

The mood is dark at Hillary Clinton's election night party.

Stony-faced supporters were crying and anxiously staring at the big screens showing election results. Some began leaving as the race wore on into the early hours of Wednesday morning.

Thousands had gathered at the Jacob K. Javits Convention Center in New York City for Clinton's election night party. The glass-ceilinged building was picked as a nod to what aides expected would be the historic election of the first female U.S. president.

Clinton, her family and close aides have spent hours ensconced in a suite at the Peninsula New York, a luxury hotel in midtown Manhattan.

She tells The Associated Press that the team is hopeful as results continue to roll in.

A Trump victory would represent a stunning upset against his rival Hillary Clinton.

Thousands of his supporters are gathered in a midtown Manhattan hotel ballroom watching the results on Fox.

Greitens, a first-time Republican candidate, has touted himself as an outsider and pledged to tackle corruption in the state Capitol. Koster took the opposite approach, emphasizing that his nearly 22 years in elected office make him qualified to run state government.

Without a voting record, Greitens was running on his time as a Navy SEAL officer and founder of a charity for veterans, The Mission Continues. Greitens' lengthy resume also includes stints as a Rhodes scholar and White House fellow, champion boxer and martial artist, a best-selling author and motivational speaker.

Republicans have clinched continued House control for the new Congress. They'll likely lose seats from their current historic high, but they won enough seats to extend their six-year streak of commanding the chamber.

With voting results still being counted early Wednesday, Republicans have won at least 218 House seats. That exceeds the number needed to control the chamber.

Republicans now control 247 seats in the House. With a smaller GOP majority, dissident hard-right conservatives could have added leverage to press House Speaker Paul Ryan and other party leaders on the budget and other issues.

Hillary Clinton has won Nevada and its six electoral votes.

Her victory there in the presidential election brings Clinton's Electoral College total to 215. Republican Donald Trump has 244 votes.

It takes 270 electoral votes to win the presidency.

Clinton's win in Nevada is the first time since the 1940s that the Democrats have carried the state in three consecutive elections.

The winner of the U.S. presidential election has failed to carry Nevada only once since 1908.

Inslee, a former congressman, touted his environmental record throughout the campaign. He said the state is requiring the biggest polluters to reduce emissions and is promoting alternative energy.

Bryant, a former Seattle Port commissioner, sharply criticized Inslee in the months leading up to the November election. He said Inslee had mismanaged state departments, especially the state's mental health system. He also said Inslee had failed to come up with a plan to fund K-12 education, as mandated by the state Supreme Court.

Donald Trump has won the battleground state of Iowa.

Iowa had voted for a Republican only once since 1984 but polls remained tight throughout the campaign. Trump proved popular with the state's sizable evangelical population while Clinton and her allies campaigned frequently in its college towns.

The Republican nominee was awarded its six electoral college votes.

He now has 238 electoral votes. His Democratic opponent Hillary Clinton has 209.

Utah is normally one of the safest states on the map for Republicans. But the presence of independent Evan McMullin changed the calculation this year as polls consistently reflected a tight three-way race. Trump also had struggled with Mormons, who are normally reliably Republican voters.

Kate Brown has been re-elected governor of Oregon over Republican newcomer Bud Pierce.

Brown became governor in February 2015 after the resignation of John Kitzhaber over an influence-peddling scandal. Brown was then secretary of state and next in line to succeed him.

Tuesday's gubernatorial vote was a special election to fill the remainder of Kitzhaber's four-year term.

Mahoning County stands out as a working-class county where organized labor still maintains political clout. Trump didn't win the county that surrounds Youngstown. But he might as well have.

Hillary Clinton won by just 3 percentage points and less than 3,500 votes. Four years ago, President Barack Obama outpaced Mitt Romney by almost 25,000 votes on his way to a 28-point margin in the county. Clinton fell more than 20,000 votes shy of Obama's total.

Youngstown is represented in Congress by a Democrat who offers some of the same populist appeal to labor as Trump. But those loyalties to Rep. Tim Ryan apparently didn't transfer to Clinton.

The popular construction company executive and part-time race-car driver had served three two-year terms as Vermont's part-time lieutenant governor. He was previously in the state Senate.

Scott takes over in January from Democratic Gov. Peter Shumlin, who decided not to seek a fourth two-year term.

The crowd at Donald Trump's election watch party is jubilant as returns continue to roll in putting him closer to 270 Electoral College votes.

Supporters packed into a hotel ballroom in midtown Manhattan are breaking into chants of "USA!" and embracing each other in groups.

Others are breaking into song, bellowing "God Bless America" at the top of their lungs.

The screens in the ballroom are turned to Fox News. When the station shows images of Clinton's election headquarters, the room breaks into boos and chants of one of Trump's slogans: "Drain the swamp!"

The Republican nominee on Tuesday was awarded its 16 electoral votes.

Trump now has 232 electoral votes while his Democratic opponent Hillary Clinton has 209.

The Democrats had some hopes that changing demographics in Georgia could allow then to flip the reliably Republican state but their efforts fell short.

Hillary Clinton has won Washington state and its 12 electoral votes.

The victory in Tuesday's elections brings the former secretary of state's electoral vote total to 209. Republican Donald Trump has 216.

It takes 270 votes to win the presidency.

California voters passed a ballot measure to legalize the recreational use of marijuana, giving a big boost to the campaign to end the drug's national prohibition.

Adults older than 21 can legally possess up to an ounce of marijuana and grow six plants.

Collectively, it's the closest the U.S. has ever come to national referendum on marijuana.