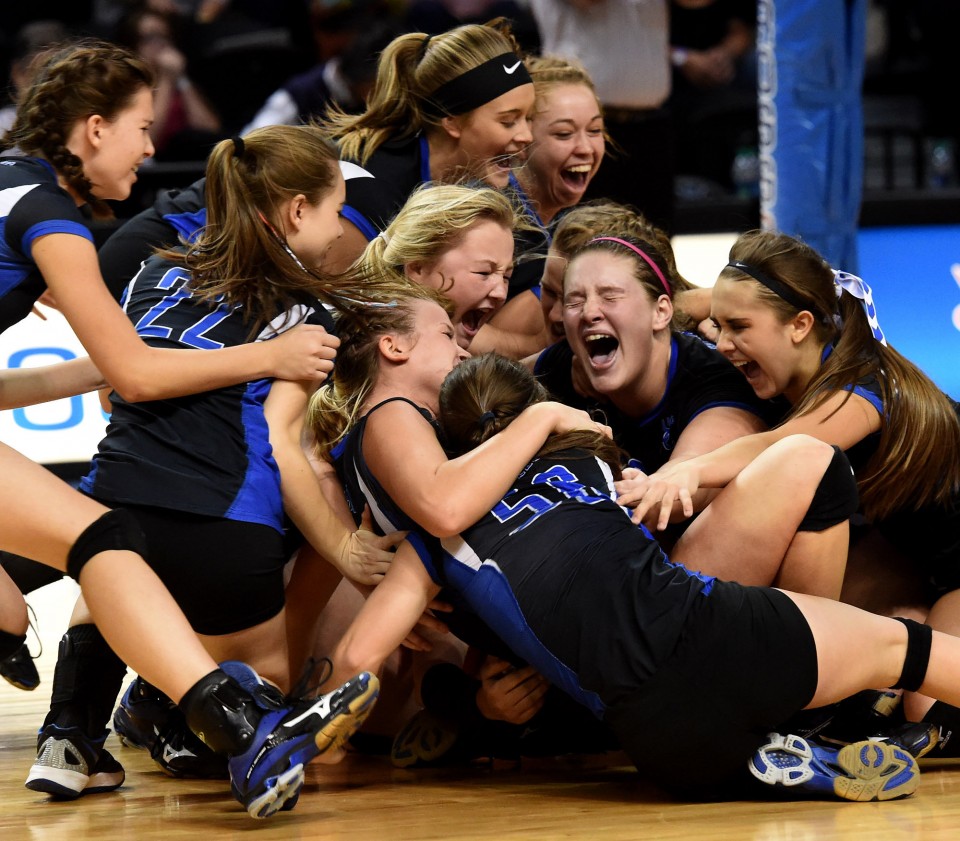 BIRMINGHAM – Addison was taken to the brink Thursday night, fighting for their fourth consecutive Alabama High School Athletic Association (AHSAA) volleyball championship. The No. 1 ranked Lady Bulldogs passed the challenge as they fought off No. 2 Decatur Heritage in five fantastic games at Bill Harris Arena inside the Birmingham CrossPlex to win the Class 1A crown for the second straight year under coach Kayla Woodard.

This was Addison's ninth state volleyball title, with it being the Lady Bulldogs' sixth as a 1A participant.

Decatur Heritage rallied in game four to claim it 25-20 and send it to a tiebreaking set, the only one all day in seven state championship matches that took place inside the CrossPlex.

In game five, Addison stormed to a 4-0 lead by four serves from Maison Evans, a block and a kill by Savannah Manley and a kill from Abbie Chambless. Regan Smothers got a serve to go and built the lead to 6-1.

Decatur Heritage managed to stay in striking distance by the play of middle hitter Kayla Grimes and server Cassidy Cheatham. The Lady Eagles closed to 8-4 then Addison regained the edge they needed on a volley by Mckenzie Berry and a kill from Abbie Chambless off a serve by Cecilee Gaither and the score was 10-4.

A point went to Decatur Heritage on a service into the net that had the Lady Eagles down 13-6. That was the last time they had a chance to try and win the fifth set.

Addison converted a volley by Gaither that raised the lead to 14-6, and a serve from Evans with a volley from Allie Chambless ended the match at 9:56 p.m., exactly two hours of No. 1 being challenged by No. 2 for the 1A crown.

Abbie Chambless had 20 kills to lead Addison, who finishes the year at 43-19. Manley accounted for 11 kills and had nine block attempts. Gaither set the team very well with 56 assists, Abbie Chambless accounted for 35 digs, Gaither had 19 and Evans tallied 31 in the five games.

Kendra Tyree contributed to the victory with 15 digs while Smothers served well throughout the match.

Grimes was selected from Decatur Heritage along with Hope Gladish and Holsclaw.

"We started off with nerves," Coach Woodard said. "We took a little bit of time to get into rhythm. I told them to slow it down and take it one play at a time."

For Manley, it was a perfect ending for her and her first varsity title as only a freshman for the Lady Bulldogs.

"We worked hours and hours with our game plan on how we were going to play against Kayla Grimes. We had our ups and our downs. I can't describe the feeling I have right now," she said.

Decatur Heritage was the only 1A school to defeat Addison all season in 17 matches in 2016, defeating them three games to none last weekend in the North Super Regional finals in Huntsville.