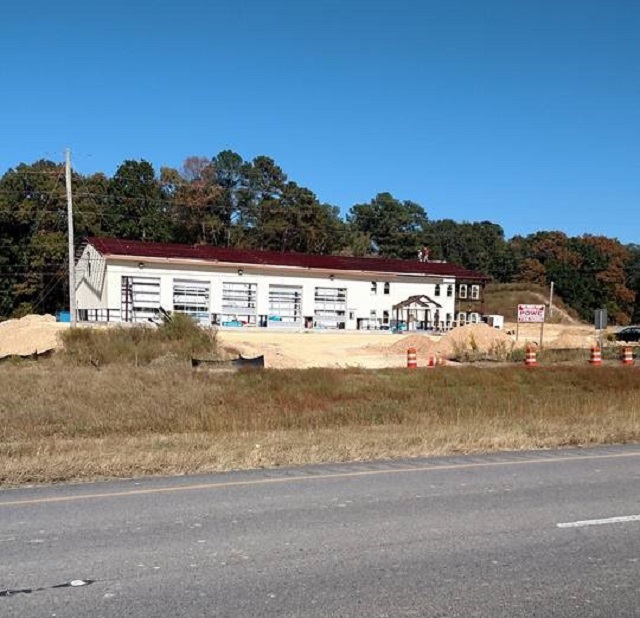 Construction of West Point's new fire station is set to be complete in about eight months. Photo from Oct. 11, 2016.

In other business, Lori Bates and Carol Waters made a request for assistance with improvements to the West Point Elementary School playground.  They presented the council evidence of needs at the playground, including old and worn equipment and a lack of access for children with special needs.  The total project would cost an estimated $120,000 with $35,000 already raised by the two presenters in grants and sponsorships.  Mayor Kenneth Kilgo agreed that the project was worthwhile, though the town's funds are limited after the recently completed repaving of three roads; and he recommended an initial contribution from the town of $5,000.  The motion passed unanimously, and council members left the door open to revisiting the project for possible additions in funding as it progresses.

Next, Pastor Dewayne Harbison of Renovation Church approached the council with his desire to create a means of encouraging property upkeep and beautification around town.  The talk did not focus on the creation of ordinances or codes (the town does not currently have any related to this particular topic), but on how to encourage a desire for excellence in the community.  Town Attorney Dan Willingham presented the idea of residential and commercial property beautification awards.  The matter did not receive any official council response, but Kilgo and Harbison agreed to meet again to discuss further ideas.

The mayor briefly updated the council on several other issues.  Construction is progressing on the new fire station, which is set for completion in about eight months.  A proposed sewer ordinance will be formally presented next month, and is intended to deter dumping in the town's sewer system by imposing fines on those caught doing so.  The town's two new storm shelters should be completed ahead of a state inspection deadline at the end of November.  The ongoing road project has seen repaving completed; shoulder improvements are underway and the County has agreed to stripe the roads when schedules permit.

The West Point Town Council, including two new faces, will be sworn in for its new term at 6 p.m. on Nov. 7.  New council members Michael Hall and Timmy Smith will attend orientation classes for elected officials hosted by the Alabama Council of Municipalities.

The council meets on the third Monday of each month at 6 p.m. The public is welcome to attend.