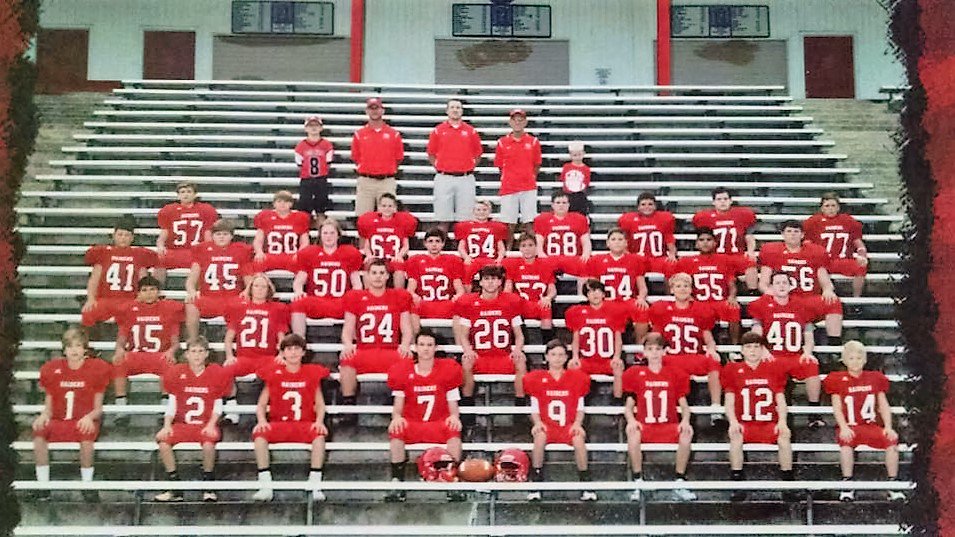 It also eased the hurt the Raiders experienced in 2015, when their winning streak was stopped by Vinemont.

On Monday evening, redemption was the word used and domination was displayed by Good Hope, who has won 35 of their last 36 middle school games.

"It feels great," Good Hope coach Tyler Hudson said after the Raiders received the championship trophy from Cullman County Schools Superintendent Shane Barnette. "I saw how these kids hurt in the locker room last year. I had to do everything that I could to help them get this championship trophy back to us. We went out there and got it."

Pugh's defensive play was shared with a Good Hope offense that ran for 286 yards against Hanceville, scoring once per quarter. The Raiders got a 16-0 lead by halftime and then were up 24-0 when Pugh got the final two touchdowns on the 2016 season and capped off a 7-0 finish.

Pugh was in on a play with his cousin, Eli Pugh, when they forced a fumble by Hanceville running back Taejon Jones after he caught a swing pass from quarterback Bo Joles.

That set up a third-quarter drive that carried into the final period when Jared Pugh took it up the middle from the 5-yard line. Then two minutes later, he had his pick six and the Raiders had taken care of the game.

Good Hope scored off three of four Hanceville miscues, three of them being interceptions. Hanceville was driving on the first series of the game when Justice Cook stole a pass thrown by Joles and the Raiders took over at their 35.

In 2:00, Good Hope took an 8-0 lead when Eli Pugh scampered 48 yards on a toss sweep and Colton Bagwell tacked on the 2-point conversion.

Hanceville had to re-kick on a punt after the Bulldogs were flagged for illegal formation. That cost them yardage with the punt being short and Good Hope getting possession at the Hanceville 48.

As the drive moved into the second quarter, Bagwell ran it for 21 yards and the TD and added the conversion for a 16-0 Good Hope advantage.

Once again, the Bulldogs got a drive going, only to see a turnover shut it down. Joles had a pass picked off by Walter Perez at the Raiders' 28 with less than a minute to go in the half. The Raiders ran out the clock and went to the locker room with their 16-0 lead.

Getting the ball to begin the third period, the Raiders dashed 65 yards in four plays with Bagwell scoring from the Hanceville 19. Eli Pugh was called on to run in the conversion and it was 24-0 Raiders with a quarter remaining.

The Hanceville fumble ended a series that started at the Bulldogs' 41 and was done at the Good Hope 38. The Bulldogs’ momentum slipped away with the turnover.

Three runs by Eli Pugh, one from Bagwell and a face mask penalty enabled the Raiders to end the series on Jared Pugh's 5-yard blast up the middle. Tanner Malin threw to Eli Pugh for the conversion and it was 32-0 Raiders with 5:00 remaining in the game.

Joles passed for the Bulldogs in the second half. But Jared Pugh read him when he took Joles' pass from the Hanceville 40 and sped down the right sideline to complete the Raider scoring and allow the defense to get involved in the festivities.

"It was amazing," the Raider linebacker said. "I dropped back in zone coverage and read the play. It feels good for this to happen. I don't know how to describe it."

Hanceville scored when Allen Huckaby ran 59 yards around right end with 1:58 to play and tacked on the conversion.

Good Hope recovered an onside kick with Hudson clearing the sidelines and the Raiders punching their ticket to another undefeated season and county championship.

Eli Pugh ran for 150 yards and a touchdown; Bagwell gained 126 yards rushing and was in the end zone twice. Jared Pugh produced 19 yards on the ground along with his TD interception return.

Good Hope had 169 yards of offense at the half and 117 in the second half to go with 13 first downs and six penalties for 40 yards.

Joles passed for 61 yards with Hanceville getting 148 total yards for the game, 59 coming on the run by Huckaby.

Since the middle school format was created in 2001, Fairview has six county championships with Good Hope now at five, West Point two and Vinemont one.

The Raiders will start the 2017 season with a 31-regular season winning streak.