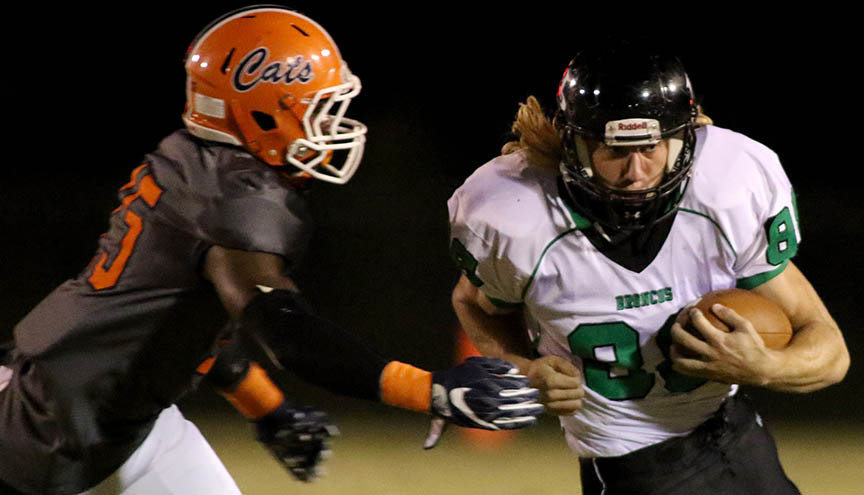 FULTONDALE – Tonight, the Holly Pond Broncos hoped for another win to follow their victory against Hanceville last week. They traveled all the way down to Fultondale to play the Wildcats, but they fell short of their goal. The Wildcats defeated the Broncos 56-27.

Fultondale started the game strong, scoring first after both teams attempted to gain yards. Despite this early advantage, the Broncos managed to hold them off for the rest of the quarter; a long pass to Tanner Duke and attempts at a first down helped run down the clock until the Wildcats didn't have enough time to score again.

The Broncos retaliated quickly in the second quarter with a long pass caught by Matt Cahoon (who only recently got cleared to play) followed by another long pass, this time to Dylan Morton, for a touchdown. An extra point from Todd Schwabb tied the score at 7-7, but the Wildcats still had a lot of fire in them.

Fultondale's running game was on fire, and the Wildcats scored again, but the extra point was blocked. Holly Pond fought back, briefly leading the game at 14-13 after a touchdown and extra point, but Fultondale played ruthlessly to dominate the quarter again. Three touchdowns, two with 2-point conversions, brought Fultondale's score up to 35 and gave then a huge lead that they fought tooth and nail to keep.

After halftime, Caleb Jones started the third quarter by running for multiple Bronco first downs, and a pass to Morton for a touchdown plus an extra point put the score at 35-21 early on. Unfortunately for the Broncos, their attempt at a comeback was met with yet another Wildcat TD. Fultondale ended up running out the clock with a score of 42-21.

Fultondale was determined to make their score as high as possible, and their determination really showed in the final quarter. Runs for first downs led the Wildcats to an early TD, and their running game was unstoppable as they gained more and more yards before scoring again. After the kickoff, Holly Pond closed the gap slightly with a touchdown from Jones, but the Broncos were unable to score again as Fultondale ran out the clock.

Holly Pond plays at home next week against Vinemont.