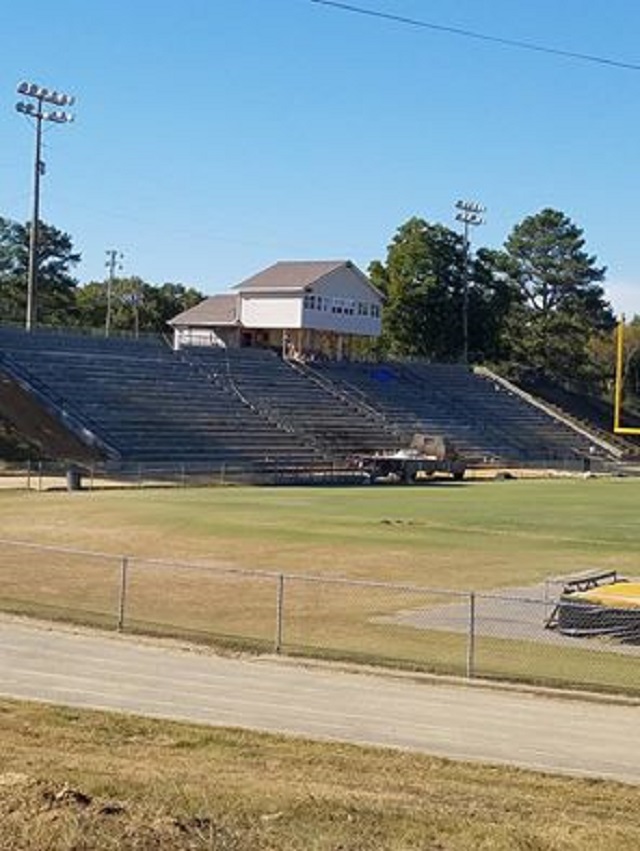 FAIRVIEW – After a little more than two long years, the Fairview Aggies are coming home. A state building inspector this morning approved the newly constructed concrete bleachers on the home side of Dafford Smith Stadium, meaning the Aggies can play at home next week for the first time since 2013. Fairview will host the Springville Tigers.

The stadium saga began three days before the start of the 2014 regular season when then-Superintendent Dr. Craig Ross and a building inspector declared Dafford Smith Stadium unsafe for spectators because of cracks in the cement bleachers on both the home and visitors' sides.

The stadium was originally opened in the mid-1960s, after Fairview began playing high school football in 1963.

Fairview had to relocate the 2014 home schedule to Oliver Woodard Stadium at Cullman High School after reaching an agreement with Cullman coach Mark Britton and the school's administration.

The Aggies played at CHS again in 2015 while plans were being made to get the Dafford Smith project funded and for repairs to begin on the on campus stadium.

Tensions mounted over the past year, as no visible progress was made this summer, and the Aggies had to use the West Point High School Stadium as their temporary home site this season…up until the good news today.

Next week's game will be extra special. Not only will the Aggies finally be home, but it is also Senior Night.  Ragan Ashley, Logan Brooks, Sambo Woods, Robert McGukin, Jesse Hawkins, Conner O'Steen, Colby Lebauve, Noah Garnett, Andrew Morris, Tyler Pendergrass, Jose Medina, Aaron Walters, Joseph Richards and Tyler Garner will finally get to enjoy the experience of playing in front of the home crowd on the FHS campus in their final game as seniors, along with members of the Aggie marching band and football cheerleaders.

Construction work will continue on the visitors' side bleachers; they are slated to be installed as soon as possible.

Next week, the fans from Springville will be sitting on the home side of the stadium with the Fairview fans.

The game next Friday will kick off at 7 p.m.