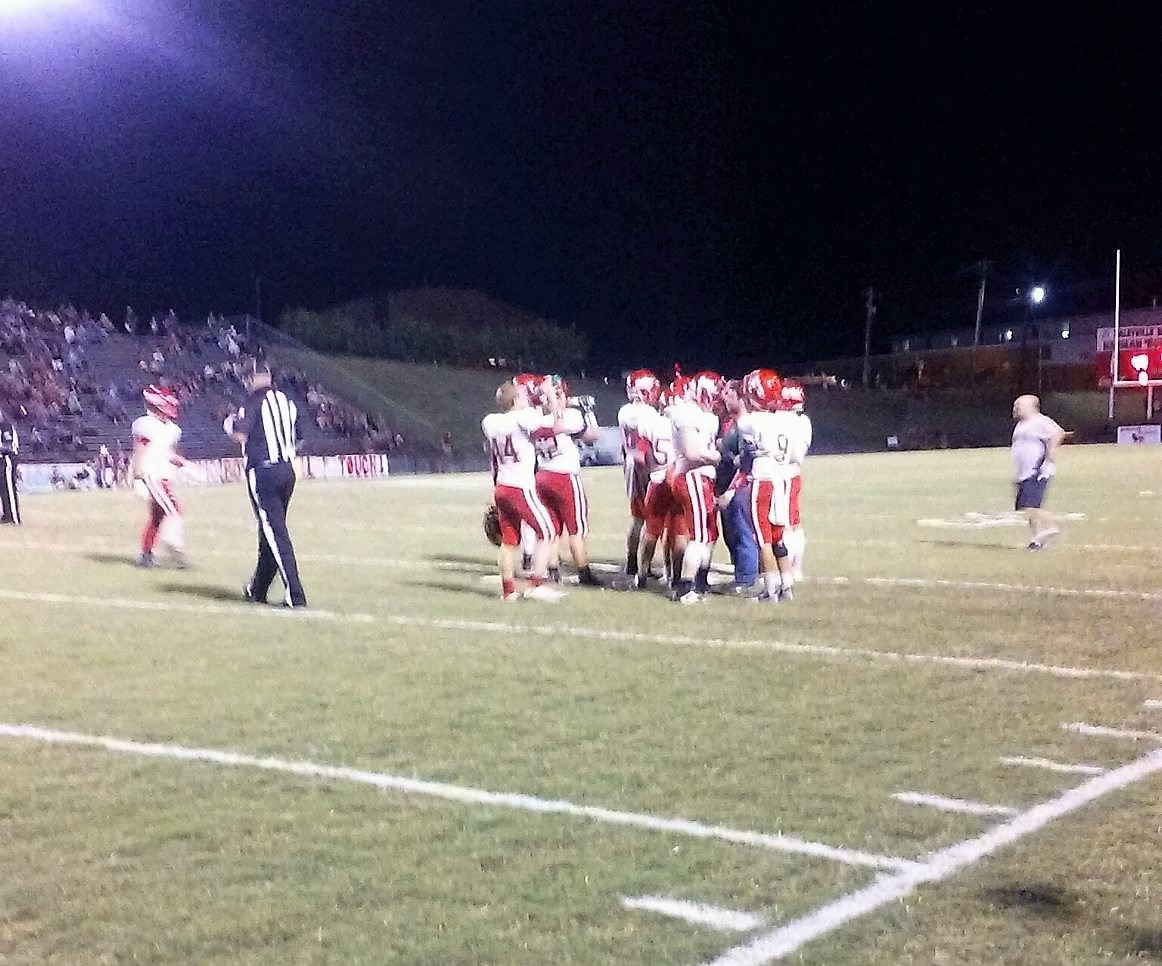 HALEYVILLE – After getting shut out in their homecoming game last week against Winfield, Good Hope looked to ruin the homecoming of the No. 5-ranked Haleyville Lions Friday night. But it did not happen as Haleyville jumped out to a quick lead and didn’t let up, routing the Raiders 56-21.

On Good Hope's first series of the game, their offense got stuffed on the first two plays. After getting called for a holding penalty on a third-and-8, Preston Bagwell overthrew Matt Dixon, with Aubrey McCullar was in the right place at the right time as he picked it off and ran 35 yards for the first score of the game with only 1:56 coming off the clock.

After forcing the Raiders to punt on their next series, the Lions struck gold on their first offensive series of the night as Scott McAlpine found Cal Taylor for a 37-yard score. Taylor had to battle with two Raider defenders on the play, but he made an amazing touchdown grab to give Haleyville an early 14-0 lead with 7:42 left in the opening quarter. Good Hope was forced to punt on their next series, and McCullar returned the punt to his team's 38-yard line. A pair of Raider penalties, plus an 18-yard run by Brady Sherrill, helped the Lions out even more as an offsides and a face mask penalty put Haleyville quickly in business at the 8-yard line. McAlpine found Sherrill for an 8-yard touchdown to increase the Lions’ lead to 21-0 with 5:48 remaining in the quarter.

Back-to-back stops by each defense gave the ball back to Good Hope, but they were forced to punt once more. Sherrill got 18 yards on his first two carries of the Lions' next series, but it quickly went backwards for them as a holding penalty, then a sack by Dixon, pushed them back farther. They nearly got it all back on the next play, but two plays after that, they fumbled, and Good Hope recovered, but again, they could not do anything with it. Dixon got a lot of practice on his punts last night as he punted once again.

Haleyville found the end zone on their next series on a 12-yard run by Sherrill to push the lead to 28-0 with 6:19 remaining in the first half. Good Hope finally got some momentum going on their side on their next series as on a third-and-15, as Dixon picked up the Raiders' first first down of the night on a 16-yard run. Two plays later, after an Eric Dickerson 6-yard run, Haleyville got called for a 5-yard face mask penalty, which put Good Hope at their own 43-yard line, but they went cold and were forced to punt yet again.

The Lions looked to find the end zone before the half ended. Behind a 33-yard run by Sherrill, plus McAlpine finding McCullar and Taylor each for 11 yards, the Lions were at their own 1-yard line and after Good Hope stuffed Sherrill on first down, McAlpine went to the air again and found Taylor in the end zone to increase the lead to 35-0, which would be the score at the half.

Just like they did in the first quarter, that's how quickly the Lions found the end zone to start the third, as a great return by Nick Sadler set Haleyville up in great field position at the 31-yard line. On just the second play, Sherrill found a big hole on the left side and scampered for a 32-yard score to put Haleyville up 42-0 with only 49 seconds coming off the clock. Good Hope looked to answer and finally get on the scoreboard. Quick passes by Preston Bagwell to Matt Hancock and Kyle Carlton, plus big runs by Bagwell and Eric Dickerson finally had the Raiders in business at their own 14-yard line and on the next play, Bagwell found Hancock to put Good Hope on the board with 7:19 remaining in the third quarter. The Lions quickly found the end zone once again as a 58-yard pass from McAlpine to Hunter Jordan put Haleyville in business. Three plays later, Ty Black found the end zone on a 2-yard run to push the lead to 49-7 with 6:04 remaining in the quarter.

Dickerson and Bagwell were workhorses on the Raiders' next offensive series as they got all 61 yards in the series, but sadly, Bagwell fumbled at the 29-yard line and Jordan Steele recovered it for the Lions. Haleyville was forced to punt. Dickerson and Bagwell again had big runs in Good Hope's next series, and Bagwell went 2 of 2 through the air for 31 yards, plus a 25-yard touchdown pass to a wide-open Dixon on the left side to cut the lead to 49-14 with 7:39 remaining in the game.

The Lions scored for the final time in the game as another awesome kickoff return, this time by Brayden Hutcheson, set them up in amazing field position at Good Hope's own 8-yard line and John Whiteside found Hutcheson in the end zone on the first play to put the Lions over the 50-point plateau at 56-14.

Good Hope looked to tack on another score before the end of the game. Big runs, once again, by Dickerson, plus big passes by Bagwell to Warren Creel and Carlton put them in business. Dickerson ended up scoring on a 3-yard run to make the final score 56-21.

McAlpine went 12 for 14 for 163 yards and three touchdowns. Sherrill rushed for 120 yards on just 10 carries and a pair of touchdowns, plus the reception for a touchdown. Taylor had 42 yards on three receptions and two touchdowns. McCullar, along with Zach Clapper, Wyn McAlpine and others, had big defensive games for the Lions, who improve to 6-1 on the season and 4-0 in the region. With a Fayette County loss to Winfield next week, Haleyville can clinch the region title, but first, they need to get a big win next Friday when they take on Dora.

Dickerson finished with 114 yards on 24 carries and a touchdown. Bagwell went 8 of 23 for 96 yards, two touchdowns and an interception. Hancock had three receptions for 34 yards and a touchdown. Dixon had 27 yards on two receptions and one touchdown. After gaining just 6 yards of total offense in the first half, Good Hope had 271 in the second half. The Raiders will travel to West Point next week in hopes of getting their first win of the season.

"They are an amazing skilled team with a lot of great players and they are well-coached. That is why they are the No. 1 team in the region." Good Hope coach Alan Scott said. "They jumped on us quickly, but we kept fighting. We threw the ball better and ran the ball better in the second half. So overall, in the second half, I felt that we played a lot better. We just need to continue to work hard."