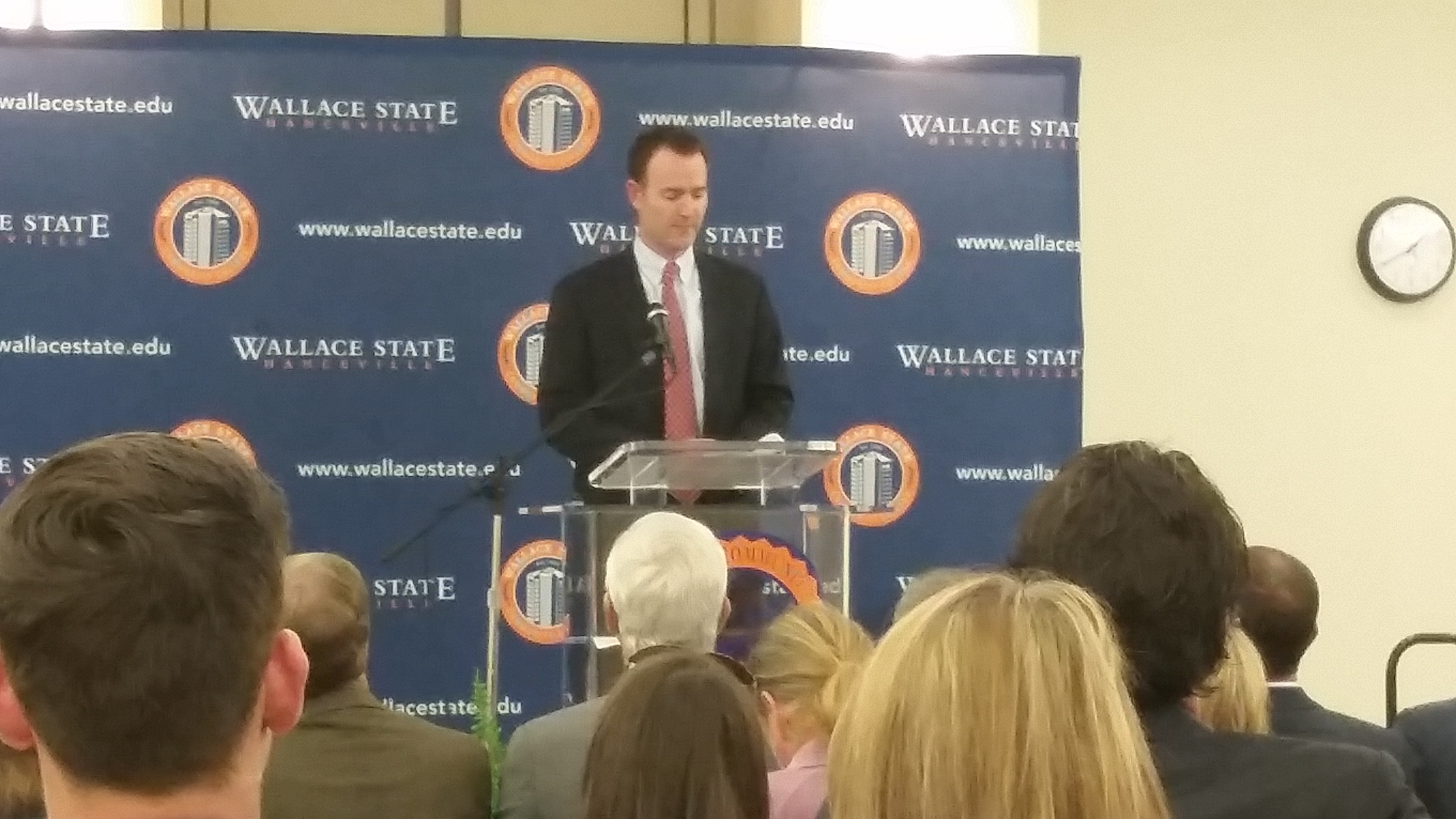 HANCEVILLE – The mood was jovial as a crowd gathered Wednesday at Wallace State Community College to hear details about the latest boon to the Cullman area economy. Sequence Health, an Alpharetta, Georgia-based healthcare technology and services company, will be opening a healthcare contact center that will create 128 jobs in the next five years.

The company’s self-described “boutique healthcare contact center” will occupy 15,000 square feet of newly constructed space in Cullman’s Industrial Park 3 and is slated to open by Aug. 1, 2017.

“We evaluated several locations in the Southeast before concluding that Cullman was right for us,” said Sequence Health CEO John Richmond. “We were impressed with the city leaders, the people here and their passion for the community. We can’t wait to put down roots here.”

The company has been operating out of the Bailey Center on the campus of Wallace State for the last two months, it was revealed on Wednesday. Right now, 25 people are working at the location.

Sen. Paul Bussman, R-Cullman said the move almost didn’t happen, because of a lack of usable business space for Sequence. That’s when Wallace State stepped in.

“Most communities would’ve just thrown their hands up and said ‘OK, we’re out,” but not Cullman,” he said. “Thanks to Dr. (Vicki) Karolewics and Wallace State Community College. They are so progressive and so innovative. They do so many things in this community that people don’t know about. Without their help, we wouldn’t be able to make this announcement today.”

He continued, speaking to Richmond, “I congratulate you, and I look forward to working with your company more.”

Cullman Mayor Max A. Townson and Cullman County Commission Chairman Kenneth Walker took to the podium together, both all smiles. Townson spoke about how well the leaders in the city and county work together, along with those in business.

“You picked the best county in the state of Alabama,” said Walker. “We want to thank you for choosing Cullman County for your business.”

Hanceville Mayor Kenneth Nail had the audience rolling with laughter as he took the stage. “That’s exactly why I want to come up here after the chairman and the mayor,” he began. “Y’all didn’t hear what he (Townson) said right before I walked up here. He said, ‘We’re gonna annex Wallace State,’” he joked.

“No seriously,” he continued, “this county works together.” He went on to boast about the county’s workforce, saying he was proud of the county’s citizens and workers and that they could always be counted on to show up and put in a “good day’s work.”

Karolewics thanked Peggy Smith and Dale Greer of the Cullman Economic Development Agency for their “contribution to the diversification of our job base.”

“I’m delighted that we’re allowed as a community college the flexibility to do things differently in terms of partnering, job development and incubating companies,” she said.

“John, to you and Sequence Health, thank you for choosing Cullman,” said Leah Bolin, president of the Cullman Area Chamber of Commerce. “You know, Cullmanites believe in working together; I don’t know if you got that today,” she said, to a round of laughter. “We look forward to working together in the months and years ahead.”