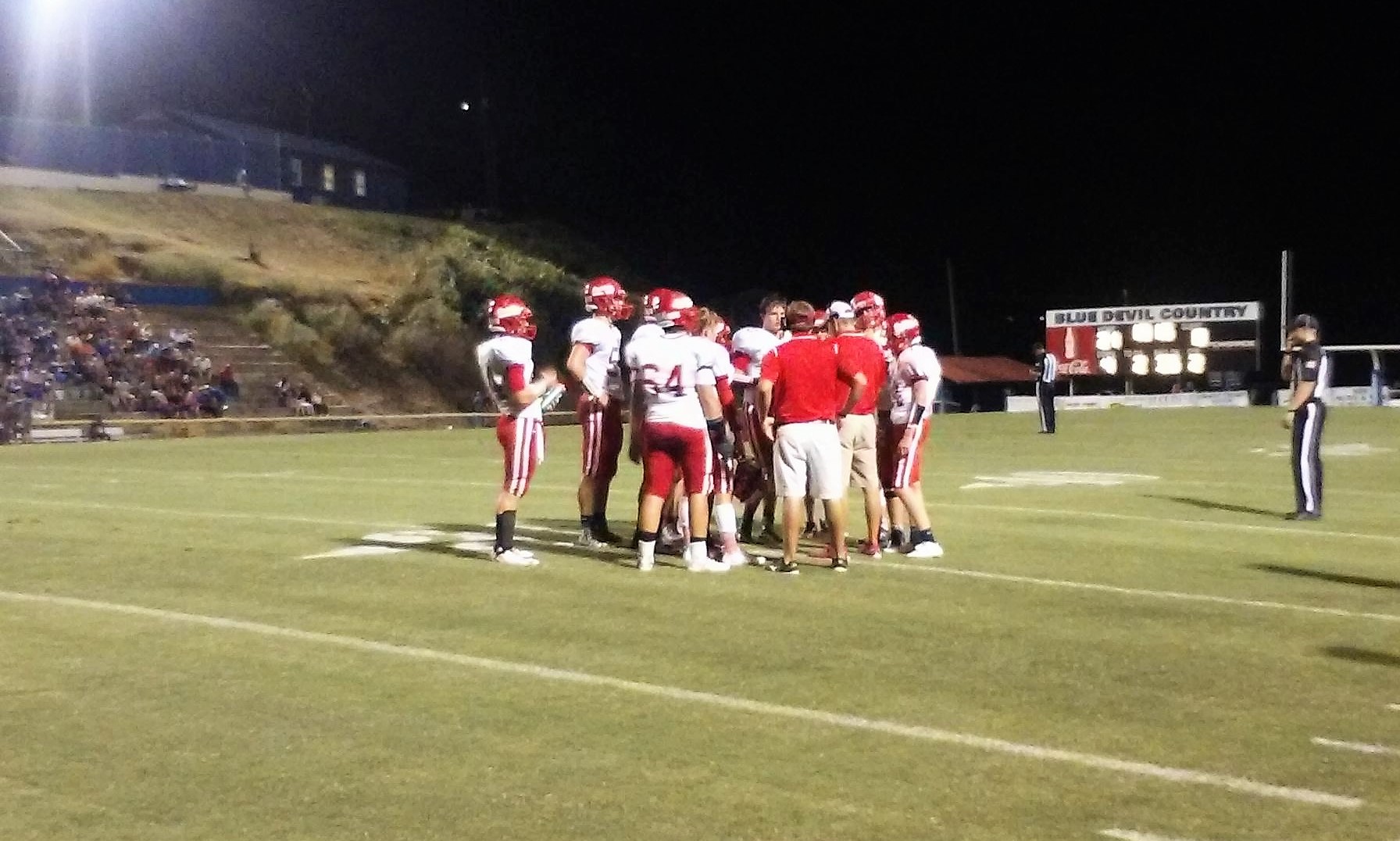 CORDOVA – The Good Hope Raiders looked to get their first win of the season and in the region at Cordova. Unfortunately, those plans did not go as planned at all as Cordova took control from the opening snap and ended up shutting out the Raiders 41-0.

Cordova did not waste any time getting into the end zone on their opening series of the game as they started on the 20-yard line. After a 1-yard loss, followed by a false start penalty that moved them back 5 more yards, quarterback Demetrius Kirk connected with Peyton Templeton for a 58-yard touchdown pass to put the Blue Devils on the board first, 7-0 on a drive that took only 1:12 off the clock.

Good Hope looked to answer on their first series of the night. After two straight incompletions, the Raiders picked up two straight first downs: the first on a Matthew Dixon 11-yard run, and the second on an 11-yard pass from Preston Bagwell to Kyle Carlton. But the drive stalled and Bagwell failed to pick up a first down on a fourth-and-2 as he lost 3 yards. Kirk went back to work by getting 9 yards with his legs on first down. Then he found Kolbi Fuqua for 15 yards. In spite of two penalties that moved them back, the Blue Devils found the end zone on a 10-yard touchdown pass from Kirk to De'Markus Tucker to give Cordova a 14-0 lead with 5:44 left in the first quarter.

Matt Hancock and Bagwell switched at the quarterback position on their next series. Hancock connected with Bagwell for 5 yards and after a yard-run by Hancock, Bagwell found Hancock for 10 yards and a first down. But again, the drive stalled and despite drawing the Blue Devils offsides on a fourth-and- 8 play, Eric Dickerson got stuffed for no gain and the Raiders turned the ball over on downs.

Kirk continued his amazing play in the first quarter. After an incomplete pass, he found Templeton on back-to-back passes: the first one went for 19 yards, and the second one went for a 21-yard touchdown pass to give the Blue Devils a 21-0 lead with 41 seconds left in the quarter. After forcing Good Hope to punt on their next series, Cordova went to work again as Kirk connected with four different receivers on their next series, finishing it off with a 20-yard touchdown strike to Tyelan-Cornell Chatman to widen the lead to 28-0 with 7:05 remaining in the second quarter. Good Hope was forced to punt again on their next series and it was the Demetrius Kirk show in the first half as he finished the half with a 34-yard touchdown pass to Fuqua to widen the lead even more to 34-0 with 2:22 remaining in the half, which would be the score going into the locker rooms.

After being hit with an illegal substitution penalty on their first series, the Raiders looked to right the ship, as Cordova got called for a face mask penalty on the next play. Good Hope was forced to punt the ball again, but a bad snap under center forced Dixon to cover the ball up at the 7-yard line. On just two plays, Cordova found the end zone for the final time in the game as Kirk found Kenderra Taylor for a 7-yard touchdown to increase the lead to 41-0 with 8:22 remaining in the third quarter.

After no gain on their opening play of their next series, Good Hope needed to find anyone to make a big play. Enter Christian Echols. The senior broke free for a 40-yard run and then picked up another first down two plays later. Again, the drive stalled and Echols fell a yard short on a fourth-and- 6.

Cordova went to their backups after a few plays on their next series and they kept the shutout in tact after Good Hope ran out of time on their last series of the game.

Kirk finished the game completing 14 of 16 passes for 253 yards and six touchdowns and he kept the ball twice for 19 yards. Templeton finished with 137 yards on six catches and two touchdowns. Fuqua had six receptions for 73 yards and a touchdown. Chatman had the 20-yard touchdown reception, which was his only catch of the night. Same with Tucker on his 10-yard touchdown grab. Cordova improves to 4-1 on the season and 2-1 in the region. They will welcome Oakman to Cordova in a non-region game next week.

Good Hope was held to 170 total yards on the night. Echols finished with 55 rushing yards on four carries. Hancock was 3/3 for 17 yards; he had to leave the game with an injury. Austin Eakes left the game with an ankle injury. Good Hope will travel to Cold Springs to take on the Eagles next Friday, who are coming off a 48-22 rout of the Falkville Blue Devils.

"We better be ready for them because they are a really good football team." Scott said. "We have to continue to work hard."