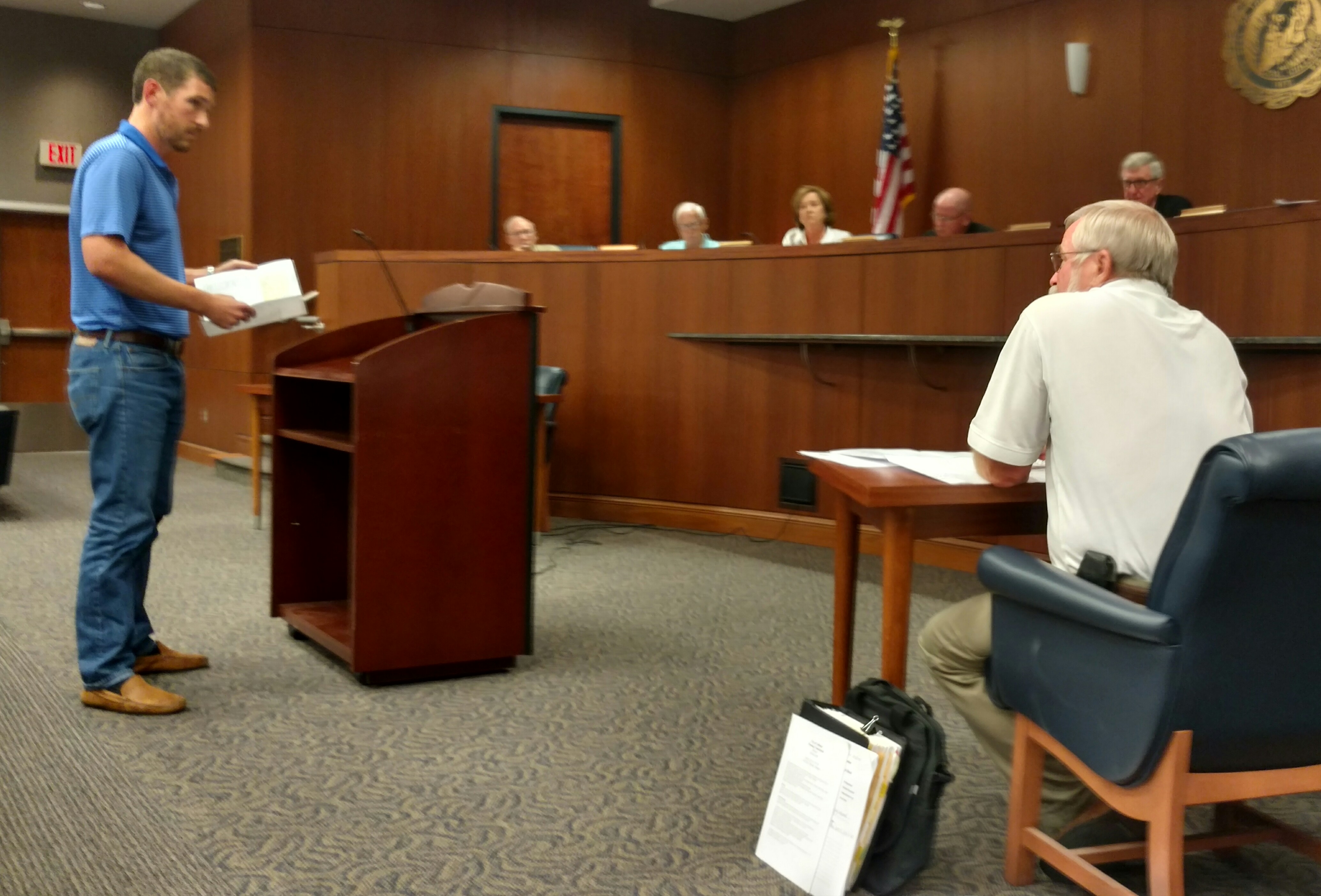 After approving last month’s minutes, the meeting moved to the first public hearing on a proposed subdivision, Fox Meadow Phase II, which proved to be a major point of contention for neighbors in the initial development. Located off of Bolte Road on the north side, the primary subdivision was built in 1997, which is when neighbors from Douglas Drive and Leeman Drive claim the problems began.

Four different neighbors spoke against Fox Meadow Phase II with only Scotty Brock, the developments’ builder, speaking up for the development during the public hearing. “This is a work in progress for the continuation on Fox Meadow Subdivision Phase II,” Brock stated simply.

The major point brought up by those opposed to the second phase was water. Photos were brought to provide evidence of standing water following rains and the excessive runoff of rainwater and silt following into Ryan Creek. Danny Hite, owner of eight acres next to Fox Meadow on the east and south sides, voiced his concerns about the retention pond, a part of the 1997 development, which is in his back yard.

“When the catch pond was initially built, the base was built and a pipe was put in between my property and Mr. and Mrs. Cook’s that diverted all of the water going in between our yards. I approached the city at that time, the city and the street department, who said it was my responsibility, at that time, to take care of that water. Not the Brocks, but me. I had to pay several thousand dollars in piping, in gravel and in concrete to take care of the water that was put onto me. Never reimbursed. Is that right?”

After several minutes of back and forth with City of Cullman Director of Building, Planning and Zoning Rick Fulmer, Voss and Brock, Hite asked the commission that he be reimbursed for his costs incurred in 1997.

Voss replied, “If you understand how the civics work on this, you’re going to take that issue up with the City Council,” while acknowledging the water issues around the subdivision and at Memory Gardens, which is on the south side of Bolte Road.

Later, in the subdivision request for Fox Meadow Phase II, the commission noted that the drawing submitted for the previously discussed pond were from the initial development plans from 1997 with no revisions. The drawings showed pipe rated for 10-year use not the 50-year pipe required by the ordinance currently. Fulmer had reviewed all of the minutes from 1997 and noted that the commission at that time did not give a favorable review of the plans almost 20 years ago. Given the options of having his plans denied by the council or withdrawing them to modify to meet current specifications, Brock opted to withdraw this plans.

In other business, the annexation request for the address of 445 County Road 1335 was approved and the conditional use of the former Romper Room daycare at 901 Second Avenue NE was granted. A new childcare facility will be opening in the building across Second Avenue from Cullman Middle School.

Austin Evans of Davidson Homes submitted the plans for Stone Creek Subdivision Phase II for feedback on its preliminary layout. Great concern was voiced by Fulmer and the council regarding the current traffic along Convent Road and the additional hazard the development would cause in that regard.

Lastly, the request for parking approval for a restaurant that will be located at 112 Clark St. NE was granted. The new 68-capacity restaurant, to be housed in the current LifeSouth Community Blood Center, will be open Tuesday through Saturday from 11 a.m. until 10 p.m.

After the discussion and approval of the parking request, the owners of Rumors Deli, Annette Harris, and Monograms Plus, Margaret and Mark Hamm, spoke up from their seats, stating the council didn’t hear from those in opposition to the plan. Noting that the request for parking approval was not a public hearing and thereby opposition is not heard, Voss allowed the owners to speak anyway.

Despite the request to speak in opposition of the request, Margaret Hamm stated, “We’re not really opposed to the restaurant itself. We’re just using this as an opportunity to say we need more parking.”

After their request, the business owners were directed to the city council who handles such matters.

The Cullman Planning Commission meets at City Hall Auditorium on the first Monday of each month at 5:30 p.m. The public is welcome to attend.