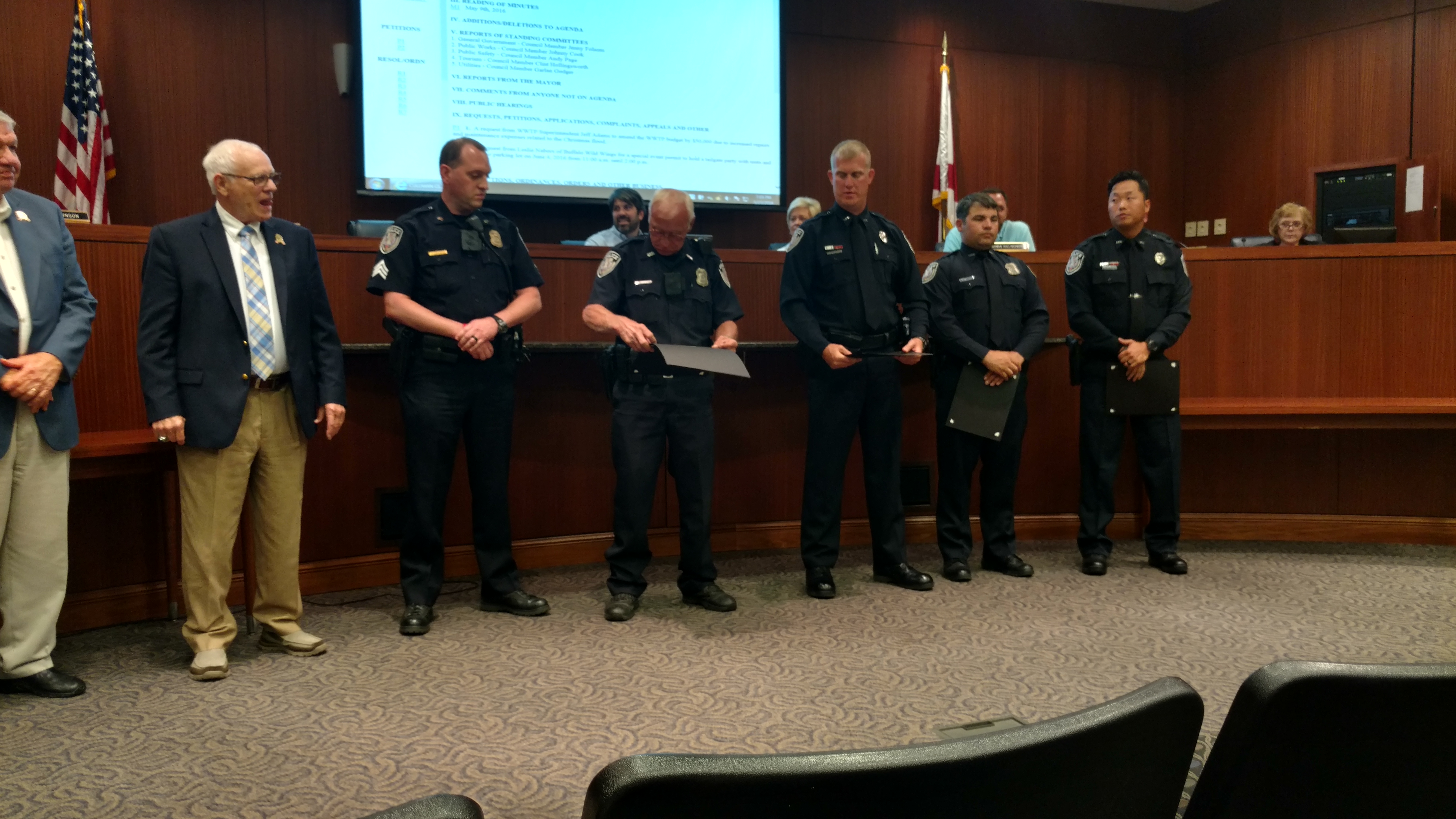 CULLMAN – The Cullman City Council held its twice monthly meeting on Monday night at City Hall, where four Cullman City Police officers were commended for their swift and lifesaving actions on April 29, 2016. On that day, the officers were initially sent on a welfare check, but it turned into a search in a wooded area for a man who had intent to harm himself. The officers searched the wooded area where the man was found hanging from a rope. Although the man was already blue in the face, the policemen arrived in time to save the man’s life.

“I believe that the quick thinking and quick response of these officers prevented the subject’s death. I recommend that Officers Tim Nalley, Joey Duncan, Intae Suh and Jacob Heaton be awarded a commendatory letter for exceptional performance of their duties. Their actions bring a credit to each one of them individually and to the department as a whole,” read Police Chief Kenny Culpepper at the presentation.

Notably, Heaton was awarded his commendation from his grandfather, Officer Terry Heaton, a member of the Cullman Police Department since 1978.

Afterward, City Clerk Wes Moore provided a breakdown of the financial impact the Alabama High School Athletic Association Track and Field meet that was held in Cullman the first weekend in May. With teams traveling from as far south as Mobile and as far north as Florence, the conservative estimate is that $141,000 in revenue was generated by the event and that attendance was up 13 percent from last year.

In other business, an additional $50,000 will be added to the budget of the Waste Water Treatment Plant to cover the Christmas flooding expenses and a special events permit was issued to Leslie Nabors of Buffalo Wild Wings for a tailgate party to be held Saturday, June 4 from 11 a.m.-2p.m. To be held in the BWW parking lot, the event will feature a band and activities for children.

Seven resolutions were agreed upon including a dead tree removal and cleanup from 1104 Third Ave. NE in the amount of $1,545 by Reeves and Son, LLC, the purchase of “additional software and training for the community development module” to Tyler Technologies for $4,518 and the surplusing of property such as wrecked vehicles, old desks and other items which are no longer needed by the City.

The council approved additional testing of the Eva Road Bridge, which is an ALDOT requirement, by Terracon for the budgeted amount not to exceed $8,860. Additionally, Good Hope Contracting, Inc. was awarded the bid for two contracts for cold and hot mix and the laying of the hot mix.

Lastly, the City entered into a Transportation Alternatives Program with ALDOT for continued downtown improvements from U.S. Highway 278 up to Third Avenue.

During the work session held at 6:30 p.m. prior to the regular meeting, the council was presented with plans for the proposed Fire Station No. 3 which will be located in close proximity to Highway 157 and Highway 31 and the new Wastewater building located on Eva Road. With the costs of the projects covering two fiscal years, the combined costs are estimated to be over $6 million. It was noted that the new fire station will be a facility which will be used for generations to come in our community.

The Cullman City Council meets on the second and fourth Mondays of each month at 7 p.m., with work sessions at 6:30 p.m. Held in the Cullman City Hall auditorium, the meetings are open to the public. The next meeting will be held on June 13.

Members of the Cullman Council include Jenny Folsom, Andy Page, Clint Hollingsworth, Garlan Gudger and an absent Johnny Cook, who was away at a work training.

According to Councilman Page, all council members, in addition to Mayor Townson, who has already announced, plan to run for reelection as they work well together as a team.