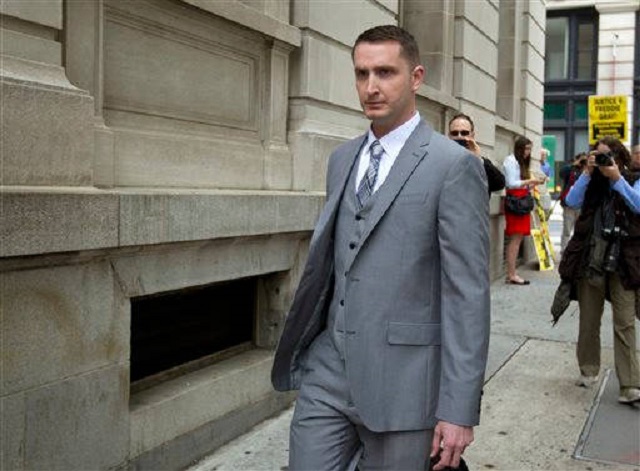 (AP Photo/Jose Luis Magana, file). FILE – This May 12, 2016 file photo shows officer Edward Nero, one of six Baltimore city police officers charged in connection to the death of Freddie Gray, arriving at a courthouse at the beginning of his trial in Baltimore.

BALTIMORE (AP) – The Latest on the trial for an officer charged in the arrest of Freddie Gray, a 25-year-old black man who died a week after he was critically injured in police custody (all times local):

The attorney for the officer acquitted of charges stemming from the arrest and death of the young black man Freddie Gray say he is "elated that this nightmare is finally over."

In a written statement Monday, attorney Marc Zayon says Officer Edward Nero is appreciative of the reasoned judgment by Baltimore Circuit Judge Barry Williams and hopes the state re-evaluates the charges against five other officers and dismisses them.

Gray died April 19, 2015 from injuries he suffered while handcuffed and shackled but left unrestrained in the back of a police transport van.

Zayon says the state rushed to charge Nero. He says Nero is still a proud member of the Police Department. But the department said in an earlier statement that despite the end of the criminal case, an internal investigation is ongoing. Nero is on administrative duty.

The Baltimore Police Department says that although an officer charged in the death of Freddie Gray has been acquitted, he remains on administrative duty while an internal investigation continues.

A judge acquitted Officer Edward Nero of all charges Monday. The police statement says Nero's investigation won't be completed until the criminal cases against all officers are complete. A total of six officers are charged in Gray's April 2015 death.

Freddie Gray was black. His death set off protests, looting and rioting. His name became a rallying cry in the national conversation about police treatment of black men.

Three of the officers charged are black; Nero and two others are white.

Other officers are set to have separate trials over the summer and into the fall.

The judge who acquitted an officer of charges stemming from the death of the young black man Freddie Gray in Baltimore says he acted as any reasonable officer would have.

Baltimore Circuit Judge Barry Williams said Monday in comments from the bench that Officer Edward Nero wasn't involved in the actual arrest of Gray and that Nero touched Gray only after he was in handcuffs.

Gray died in April 2015 from injuries he suffered after his arrest in the back of a police van.

Nero's attorney had argued that it was the police van driver's responsibility to buckle in detainees. The judge says Nero could have thought the driver or supervisor would have buckled Gray in.

The judge rejected the prosecution argument that there was recklessness or negligence on Nero's part.

As Williams spoke, Nero appeared to wipe away a tear.

The Baltimore police officers' union says Officer Edward Nero is relieved by his acquittal on charges stemming from the death of Freddie Gray.

Fraternal Order of Police Lodge No. 3 President Gene Ryan said in a statement Monday that Nero's relief is tempered by the fact that five other officers await trial.

Ryan says: "Officer Nero prays that justice will serve each of the remaining officers with the same fairness that it served him."

Ryan says none of the officers did anything wrong. He says prosecutors rushed to charge them without a meaningful investigation.

Ryan says the charges are politically motivated. He says the prosecution of the officers has destroyed their lives and demolished the relationship between the city's police department and the state's attorney's office.

About a dozen protesters are gathered outside the courtroom in a largely peaceful scene after the acquittal of an officer in the death of the young black man Freddie Gray.

On Monday, shortly after the judge gave his verdict, reporters outnumbered protesters, some of whom were being interviewed.

Gray's death April 19, 2015, set off more than a week of protests followed by looting, rioting and arson that prompted a citywide curfew. The mayor said Monday that the city is prepared to respond to any disturbances in response to the acquittal.

Baltimore's mayor says the city is prepared to respond to any disturbance after the acquittal of an officer in the death of the young black man Freddie Gray.

In her statement Monday, Mayor Stephanie Rawlings-Blake says the city will protect neighborhoods, businesses and residents. Gray's death April 19, 2015, set off more than a week of protests followed by looting, rioting and arson that prompted a citywide curfew.

Rawlings-Blake's statements asks residents to be patient and allow "the entire process to come to a conclusion."

She released it shortly after a judge found Officer Edward Nero not guilty of misconduct in office and reckless endangerment. She says, "This is our American system of justice and police officers must be afforded the same justice system as every other citizen."

A Baltimore police officer has been acquitted of assault and other charges in the arrest of Freddie Gray, a young black man who died a week after he was critically injured in police custody.

A judge found Officer Edward Nero not guilty of misconduct in office and reckless endangerment. The judge announced his verdict on Monday.

Nero was one of six Baltimore police officers charged in the case. He waived his right to a jury trial, opting instead to argue his case before Circuit Judge Barry Williams.

An earlier trial for an officer charged with manslaughter in the case ended in a hung jury in December.

Gray's death about a year ago led to protests and rioting in the city and fueled the Black Lives Matter movement.

A Baltimore judge is expected to announce his verdict in the trial of a police officer charged in the arrest and subsequent death of Freddie Gray.

Officer Edward Nero is charged with assault, misconduct in office and reckless endangerment.

Gray died April 19, 2015, a week after his neck was broken in the back of a police transport van while he was handcuffed and shackled, but left unrestrained by a seat belt. His death set off protests and rioting that month.

Prosecutors say Nero unlawfully arrested Gray and was negligent when he failed to buckle him into a seat belt. Nero's attorney says the officer wasn't directly involved in Gray's arrest, adding it's the driver's responsibility to ensure a prisoner's safety.

Both the state and defense delivered closing arguments Thursday.

Copyright 2016 The Associated Press. All rights reserved. This material may not be published, broadcast, rewritten or redistributed.