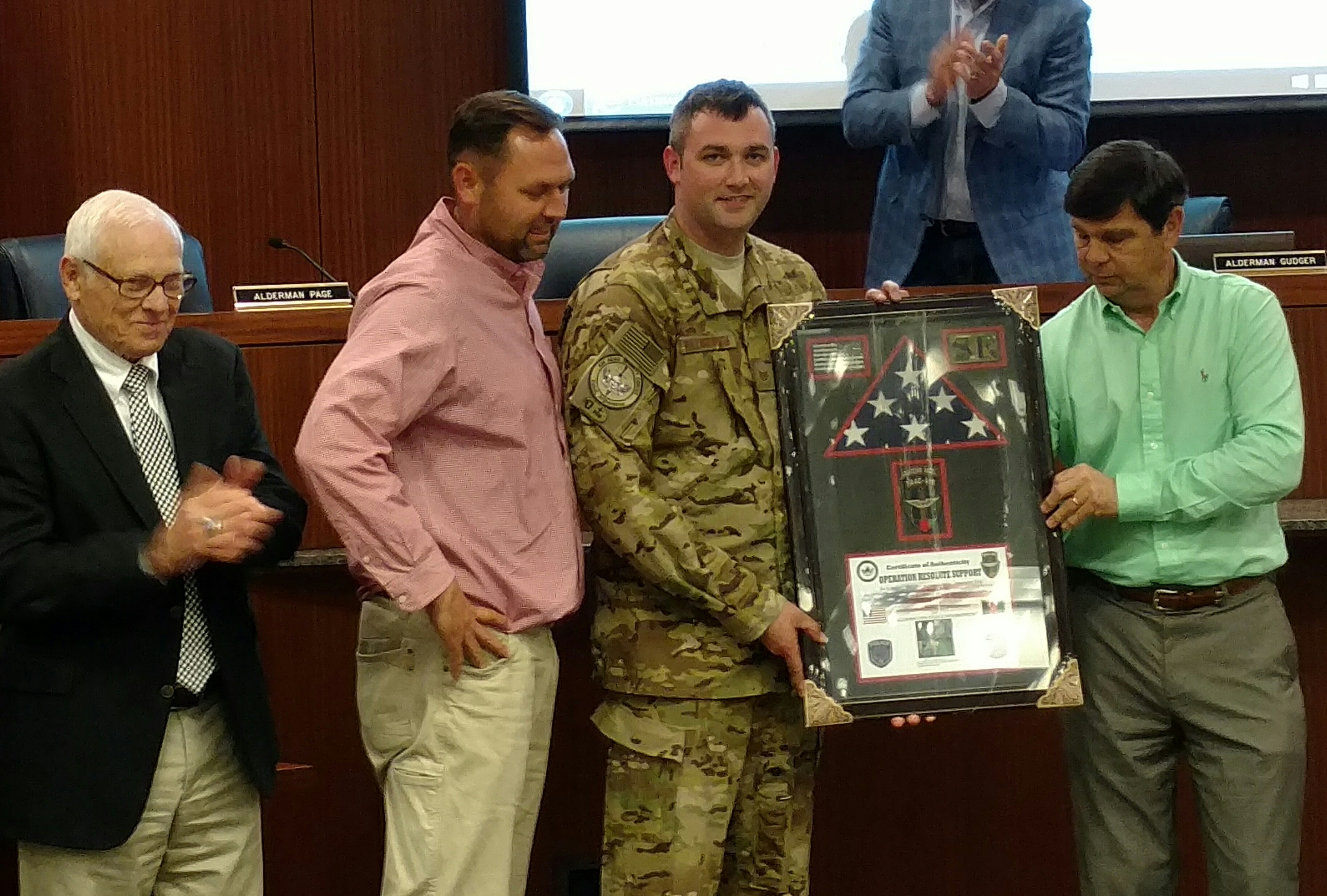 CULLMAN – The Cullman City Council met on Monday, May 9, with all members present. Efficient yet busy, the meeting saw the council agree to provide financial assistance in the amount of $2,500 to the Cullman City Parks and Recreation’s Connected Park project, City Clerk Wes Moore acknowledged for his dedication and hard work in the Alabama High School Athletic Association Track and Field meet hosted at Oliver Woodard Stadium over this past weekend and Air National Guard Technical Sgt. Justin Hollingsworth applauded for his service in Operation Resolute Support.

With the meeting called to order, the invocation was given by Cullman City Police Chief Kenny Culpepper.

During Hollingsworth’s presentation, Culpepper shared, “I would like to say how much we appreciate all of our members of the police department and city employees that are with the Guard and reserves and the efforts they give for our country. But also I would like to thank the City and the police department for all of the support that we get as reserves when we deploy.”

Hollingsworth, who was deployed with the 438th Security Forces TAAC-AIR, presented the police department with the flag he carried with him on a mission in Kabul, Afghanistan, explaining, “Our main mission was to train, advise and assist the Afghan Air Force to be a more dependable and a more sustainable air force.”

He went on, “The mission we went on that night was to go with the Afghan pilots who had never flown at night. So, we’re there just in case of an emergency landing, just kind of riding along with them. The cool backstory on that flag is we actually got shot at when I carried the flag that night, but it was nothing crazy.”

Hollingsworth, younger brother to Councilman Clint Hollingsworth, was given a standing ovation and much praise. The elder brother noted, “That’s my little brother, but he’s got more gray hair!”

The surge of visitors to Cullman over the past weekend was a hot topic with Tourism Chair Hollingsworth, and he noted the dedication of the city employees handling the influx of people and the cooperation of all departments working together being keys to the success of the track meets, softball and baseball tournaments, Relay for Life, Strawberry Festival and other events held.

Five petitions were presented to the council, including the request for the 2016 Oktoberfest celebration. Submitted by Marsha Franks, president of Cullman Oktoberfest, the event is scheduled for Oct. 5-9 to be held in roughly the same areas as this past weekend’s Strawberry Festival. The event request form noted “German music, food, dancing, arts and crafts, car show and other non-traditional activities” would take place. Her request was granted.

Kerry Zozoka, of the Heritage Village subdivision off of Welti Road, submitted a request to hold a neighborhood block party on Saturday, May 21, which was approved.

A request for a special event permit for a road closure for the 5th birthday party of community member Trent Moore’s son was presented to the council. Approved, the May 28 party will close down 11th Street Northeast between Main Avenue Northeast and Second Avenue Northeast from 10 a.m.- 8 p.m.

The council approved the use of the Cullman parking deck for a May 13 car show and a special event permit for the show itself which was submitted by Cherrelle Fancher of Fancher Education Service.

Lastly, no action was taken by the council on the request to surplus a 30-foot easement on the north side of Greg and Kim Arndt’s 13th Street Northeast property. Rather, the issue will be passed to the planning commission.

The first resolution of the evening, Resolution No. 2016 – 69 which aims to support the planned all-inclusive playground, Connected Park, passed with the strong support of the council. The resolution budgets $2,500 to be provided to the fundraising campaign efforts. The project is designed to accommodate Cullman citizens of all ages with special needs and will be in the Ingle Park location. Council President Pro-Tem Jenny Folsom shared her feelings, “The Connected Park will be an outstanding addition to our community. It is going to serve all ages and all abilities of people whatever their physical or mental ability might be. It’s going to be a wonderful addition!”

Three resolutions were added, including an agreement with the City and the East Cullman Water District over a boundary resolution for an area behind Cullman Regional Medical Center. Folsom noted that the resolution, in works for some time, will allow for the tentative future water and sewer needs of any CRMC expansion to be met by the city.

The final two resolutions included the initial removal of possible contaminates and clean-up efforts in line with Alabama Department of Environmental Management guidelines for the old water treatment plant located off Eva Road.

The members of the Cullman City Council and their committees are as follows:

Cullman City Council meetings are held on the second and fourth Monday of each month at 7 p.m. at Cullman City Hall and are open to the public.

Parkside teacher a state finalist for the 2021 Presidential Award for...