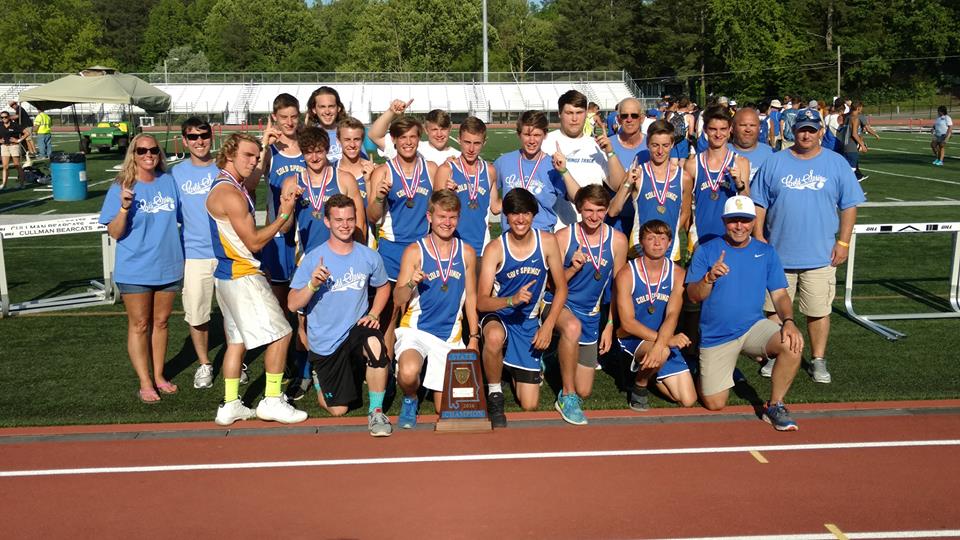 CULLMAN – St. Bernard Prep and Cold Springs could not wait for Saturday to arrive so they could get back to work in the Alabama High School Athletic Association Track and Field championships.

Through the first series of running and field events at Cullman's Oliver Woodard Stadium Friday, the Saints and the Eagles were right where they wanted to be. Both were in second place and ready to put together astounding performances that left the rest of the competition in a standstill.

After nine events to open the meet, St. Bernard was down to Marion County 56 points to 49. Then in 13 events with a majority favoring the Saints in their ability to score in running, the prep school blazed a trail with 89 points and went ahead of Marion County and the others that were contending on Friday.

Cold Springs capitalized on its last event Friday, taking first in the 4×800-relay that got the Eagles within a point of leader Lafayette in Class 2A.

The Eagles took on 13 assignments Saturday and produced 105 points to move Lafayette out of the top spot and get into a battle for the lead with sectional rival Falkville.

Now to pull off a state title in the second year the AHSAA moved the smaller classification meet from Selma to Cullman makes it much sweeter.

The Saints got another first-place finish by Dominic Paulter who took the title in the long jump at 21-feet, three and a quarter inches.

Paulter and Casey Guthrey were third in the javelin and 3,200-meter and Nate Griffin scored a runner-up triumph in the 110-meter hurdles.

The clincher for the Saints was the 4X400-relay as they earned a respectable winning time and began to celebrate, knowing the blue trophy the AHSAA presents to champions was coming their way a little later.

Cold Springs' quest for state championship stardom began Saturday morning with CJ Lang the winner in the 3,200-meter at 10:31.80 and Jared Stanley in third position with a time of 10:35.70.

The Eagles' 4X100-relay was second with a finishing time of 44.60 that added eight points to their scoring total.

Cayde Elliott displayed a good outing in the javelin, finishing third with a toss of 155-feet, 5-inches.

After leading the first day by 5.5 points, the St. Bernard Lady Saints started slow on Saturday and were overtaken by Whitesburg Baptist and Westminster Oak Mountain.

St. Bernard produced 46 points through Friday's assignments. By late Saturday afternoon, Whitesburg was on top with 109 to 103 for Westminster. The Lady Saints fought back and finished strong with 98.5 points for third in the 1A classification out of 23 schools competing.

Cold Springs Lady Eagles were eighth through 18 events. Ashleigh White, a co-MVP from the recent county meet, claimed second in the 800-meter run for her best performance on Saturday.

Winfield was the best in Class 3A with 97 points collected through two days of field and running events. T.R. Miller from Brewton turned back Cottage Hill in the 3A girls, having 92 points following 18 events to 72.5 for the runners-up.

The state track meet has one more year on the current contract for the small schools to compete in early May on the Cullman High School campus.

Bids for the state championships after the 2017 season will be determined at a later date.

The efforts by the City of Cullman, Cullman High School and others provided a boost to the local economy this weekend. Along with the AHSAA meet, the Strawberry Festival and other events, and with perfect weather, hotels were full to capacity and there were plenty of areas for the teams and their families to dine.