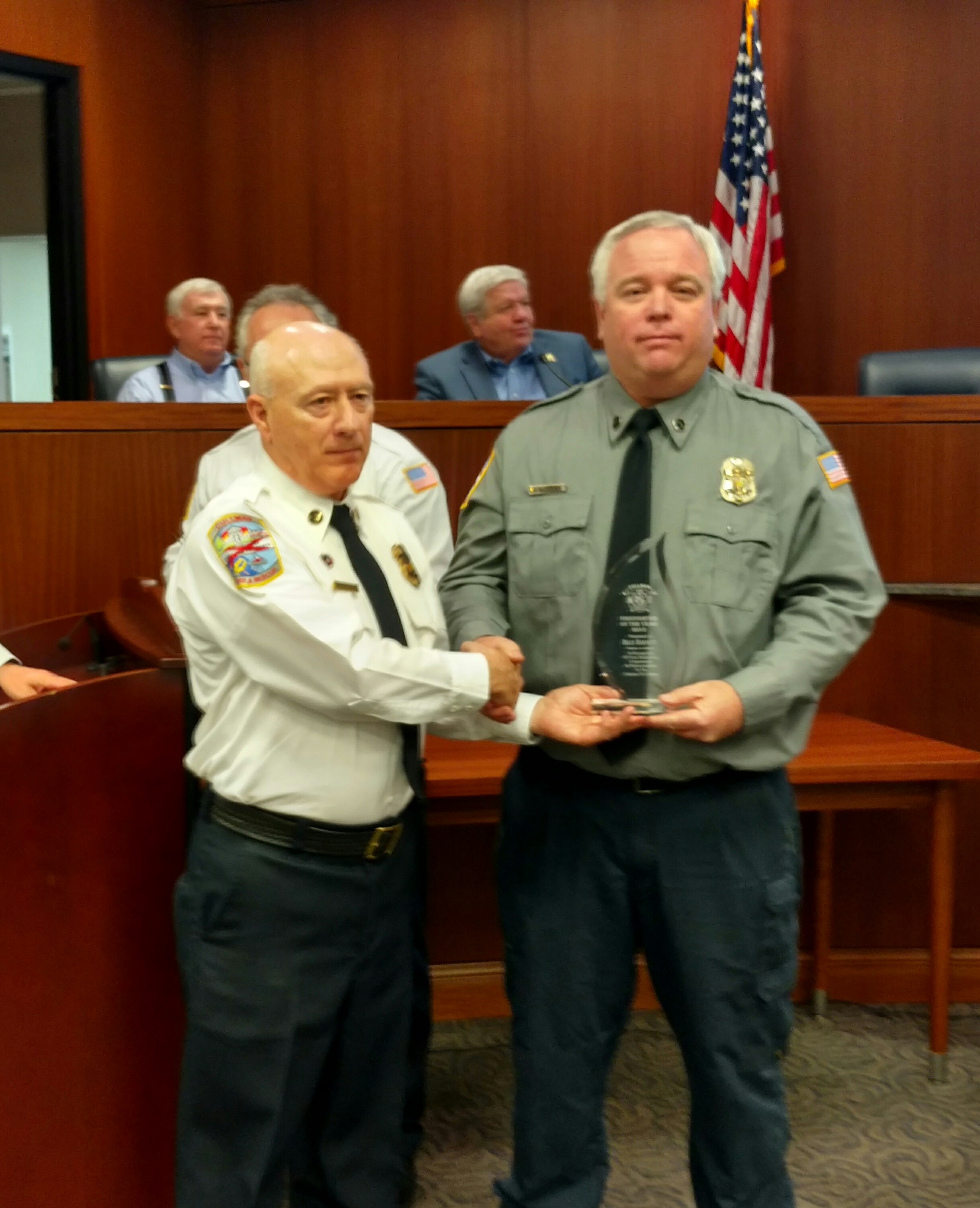 CULLMAN – The Cullman City Council gathered on Monday evening at the Lucille N. Galin Auditorium in City Hall for a regularly-scheduled meeting, the highlight of which was the naming of the EMT and Firefighter of the Year for 2015.  With all members present, Cullman Fire Chief Edward Reinhardt said the invocation before the last meeting’s minutes were approved.

The Public Safety Committee presented awards to two special attendees. Paramedic Nick Marion was named EMT of the Year. Firefighter of the Year was awarded to Billy Barnett. Many of the department’s employees were in attendance supporting those awarded, including four new trainees.

Resolution 2016-60, granting a tax abatement for Rehau Construction, LLC., was approved. Per the resolution, the abatement is granted exempting Rehau of “all state and local noneducational ad valorem taxes, all construction related transaction taxes, except those construction related transaction taxes levied for educational purposes or for capital improvements for education as the same may apply to the fullest extent permitted by the Act.” Council President Garlan Gudger, Jr. stressed the importance of educational funding and that the company would not be exempt from those taxes. The abatement was issued for a period of ten years.

The City will be applying for grant funds to purchase property for industrial use. The Tennessee Valley Authority (TVA) Invest Prep Programs will require a 50 percent match from the City not to go over $500,000. Per Resolution 2016-58, “The City will execute the Invest Prep contract within 30 days of receipt, commence project work within 90 days thereafter and commit to complete this project within 18 months from the date of the executed contract.”

A request was submitted for an amendment to the budget and authorization for repairs to the City’s helicopter for the amount of $107,266.53. The request for repairs, due to the necessity of engine replacement, was submitted by Police Lieutenant Danny Hite and the work will be performed by AeroMaritime America, Inc.

Two special event permits were issued. The first was given to Belinda Morris of Simcoe Worship Center for a 5K, with a festival serving as the start line to be held on Oct. 15. The second permit was issued to Robert Nesbitt to hold a wedding reception on April 2 at a residence in the east side historic district.

An approval was given to a request by Fire Chief Reinhardt to transfer funds from the Travel and Training budget to the Vehicles budget in order to purchase a 2016 Chevy Tahoe 4WD from Donohoo Chevrolet in Fort Payne. The $38,000 purchase was not budgeted but is expected to save the department and the City money in the long run.

Two requests from the Waste Water Treatment Plant were approved, with the first being the purchase of materials needed to repair the screen at the South Pump Station and the second to replace an 11.5 HP pump. The total of the two purchases is $28,451.

Street Superintendent Scott Talley made two recommendations which were approved. Madison Materials, Inc. of Guntersville, the lowest responsible bidder, was awarded the bid for various rock at the cost of $1,142,500 for delivered materials. DCA Ready Mix, Inc. of Cullman submitted the winning bid for various concrete material needed by the department.

The council members agreed to continue the City’s relationship with the North Alabama Mutual Assistance Association and to donate its surplus fire truck to the Arkadelphia Volunteer Fire Department.

Lastly, a new accounting system for tallying sick and vacation days required an amendment to Personnel Rule VIII Sections 4 and 5 as recommended by the Personnel Board.

The council meets on the second and fourth Monday of each month at City Hall Auditorium at 7 p.m. Meetings are open to the public. The next meeting will be held on March 28.