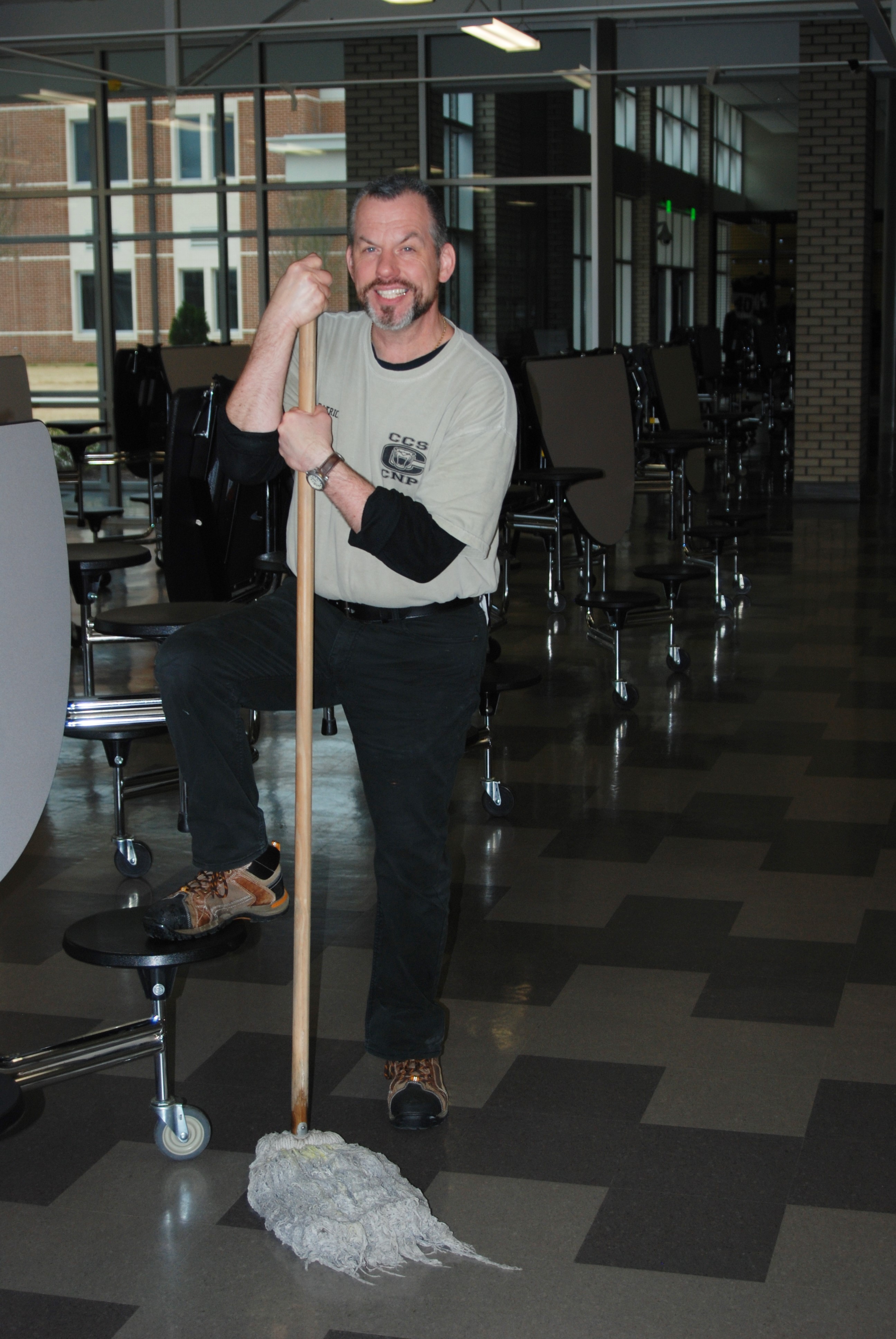 My mother always says, ‘You got to get out there and work. Be independent and take care of yourself.’ And I do.”
Patrick Riley, CHS janitor

CULLMAN – Patrick Riley is someone special. The janitor at Cullman High School (CHS), he seriously loves his job and takes his job very seriously. While some might consider maintenance work mundane, Riley smiles happily as he cleans and mops up the lunchroom, along with his many other responsibilities. But it is so much more than that– Riley is a beloved member of the CHS family. He goes above and beyond his regular duties to make sure the school is spotless and the students, his students, are happy.

“Patrick pays very close attention to detail,” said Mark Stephens, vice principal. “He is really in touch with his job. For example, on Wednesdays he normally gets a truck with supplies that he unloads and puts away. But due to the holiday break, we were already stocked so the truck didn’t come. Because he had some extra time, Patrick cleaned all the windows without even being asked. They are spotless,” he grinned. “Don’t get between Patrick and his work,” he chuckled.

Born and raised in Newburg, New York, Riley took special education classes and graduated high school. Later, he moved to Cullman with his parents and nephew in 1994. He is one of four children and considers his nephew more of a little brother with whom he shares a special bond.

Riley started his janitorial career back in 1995 when Principal Charlie Montgomery hired him to work part-time at Cullman Middle School. After 12 years at the middle school,  Riley was promoted and took the janitor position at CHS. He has been there ever since, racking up more than 20 years with Cullman City Schools.

“My mother always says, ‘You got to get out there and work. Be independent and take care of yourself.’ And I do,” Patrick smiled happily.  “I’ve been working hard all these years and I have a house of my own just up the street,” he grinned. “I live by myself and take good care of my home. I’ve been living there for 15 years now. I fixed it up beautiful and decorated it by myself, just the way I wanted it. It’s really a fancy bachelor’s home,” he said shyly.

What do the students at CHS think about Riley?

“The kids love him,” said John Anderson, school resource officer. “He makes them handmade cards and passes them out. At Christmas every year the school has an Angel Tree with names of children whose families cannot afford to buy presents. Patrick always takes four children from the tree and buys their Christmas. He is pretty special. His favorite saying is, ‘I’ll break my back for you’ and he really would,” he laughed.

A man of faith, Riley strives to do all things pleasing to the Lord, and it shows. His outlook on life and his love for others are like a breath of fresh air. He is a wonderful example to the students in so many different ways.

“I try to be honest with all the kids and respect them,” he explained. “I try to make them feel special. I always tell them, ‘If you’re not having a good day, you can always have my good days because your days matter, my days don’t’. That’s being honest and respectful,” he said quite matter-of-factly. “I try to make it easy for the kids in the lunchroom. I work very hard and try to make things nice for them. I am also doing it for the good Lord above,” he smiled warmly.

He was waving and smiling at my 8-month-old baby son. So I asked him, “I see you by the schools each afternoon, why are you always walking there?”  He said very proudly, "I am the janitor at the high school ". He told me he has been there for 20 years and that the kids call him ‘the No. 1 janitor.’ In the course of our wonderful conversation he told me that people didn't always talk to him and weren't always nice to him because of his brain. I told him it was their loss and gave him a long hug and said those people missed out on getting to know a very nice person. He said he wasn't from Cullman, but he liked it here because he moved here and that's when people started being nice to him, and I agreed with him and said the Lord had led us both here to Cullman. He also told me he helps out less fortunate families with children and this year so far he had already helped out four children. As we said our good-byes he said, "if you were poor I'd help out your children too". God bless.

Riley is a man of many talents. When he is not working at the school, he spends his time as an artist and a musician.

“Back when I was in high school in New York, I was one of the popular artists in school,” he smiled. “When I have the summertime off from school, one of my hobbies is doing artwork. I make Christmas cards once a year and try to give them out to a lot of kids. They always keep their cards,” he chuckled. “I always tell them that if they don’t like them all that much, they can throw them away, but they never do.”

Riley is a songwriter and has written a few songs he recorded in Nashville. Those songs, originally placed on a cassette tape, were later transferred to a CD so he can listen to it and play it for his friends and neighbors. He has tinkered with the guitar some in the past and now enjoys singing the oldies at local karaoke events.

Sometimes, on really good days, he sings while he’s mopping the lunchroom, to the delight of all the students within earshot.

Riley is not just the janitor at CHS, he is an inspiration. Humble and hard-working, he has taken his job and perfected it. He never complains and always has a smile on his face. He loves and respects the students and faculty at CHS, and they love and respect him right back.

Most everyone who knows him agrees- the world sure could use a lot more people like Patrick Riley in it.