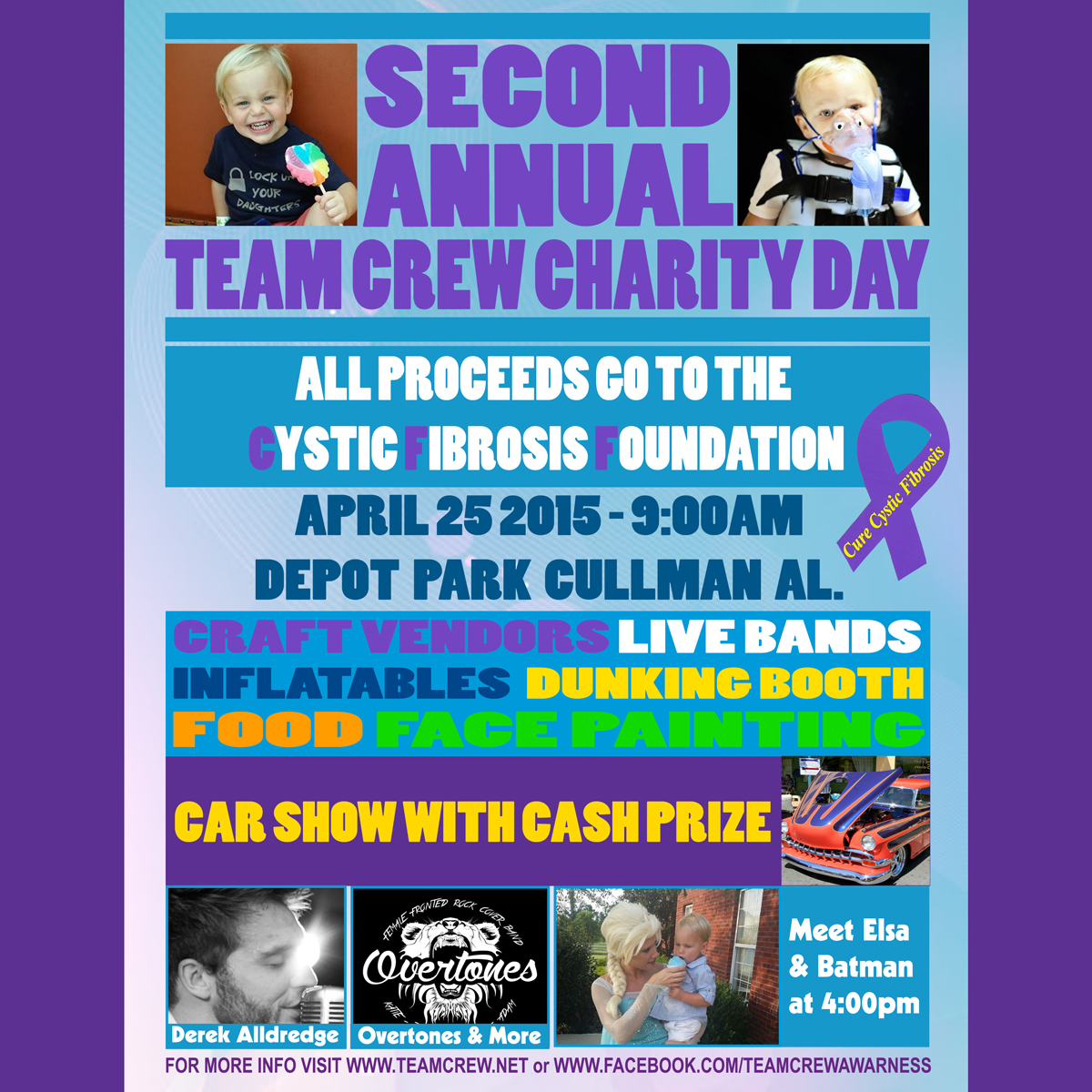 CULLMAN – Cystic Fibrosis affects approximately 30,000 people in the United States alone. It is a life threatening condition that is the result of a defective gene that causes large amounts of mucus to accumulate in the lungs, pancreas and other organs. One of those affected is a little boy named Crew who lives here in Cullman.

Since his diagnosis, Crew’s family and friends have decided to take a stand against the disease by holding an annual fundraiser to benefit the Cystic Fibrosis Foundation and their efforts to find a cure. This year’s event will be at Depot Park on April 25. Jessica Pettus, Crew’s mother and coordinator of the event, spoke on the new events that will be at this year’s fundraiser.

“You can expect some awesome new stuff this year,” said Pettus. “We are preparing to make things bigger and better, like the car show with a cash prize, meet and greet with Elsa and Batman, a new variety of food vendors, more inflatables for the kids, a dunking booth and double the amount of craft vendors! There is really something for the entire family!”

Bands like Overtones and Derek Alldredge are already scheduled to perform at the event, but more are being lined up.

“Right now we are getting all of our bands and entertainment lined up,” said Pettus. “We already have some great music. We will also have dancers from The Factory performing. Closer to the event we will release the full entertainment schedule.”

While last year’s event was a success, Pettus stated that to make this year even better they had to have their eye on the prize early this year.

“This year we really started planning early, can't procrastinate for an event this big anymore,” Pettus said. “I believe this year will be even more fun and successful.”

She also touched on Crew’s progress this year, noting that this flu season has so far went very smoothly.

“Crew is doing really well right now,” she said. “Winter is always the hardest season on him, trying to keep him from getting sick. Kids with Cystic fibrosis are at a higher risk for lung infections and a lot of them get hospitalized this time of year and luckily Crew hasn't this season. We are really blessed.”

All proceeds go directly to the Cystic Fibrosis Foundation. For more information on the event or Crew's story, visit their Facebook page at facebook.com/teamcrewawareness or their website at teamcrew.net. Vendors can also register and rent their booths on the website.