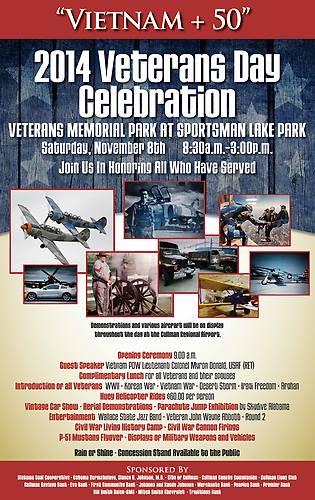 CULLMAN – Thanks to the efforts of a retired U.S. Air Force Colonel, the city of Cullman will be hosting its largest ever Veterans Day Celebration this Saturday, November 8.

“This is about the 10-12 year we’ve had the celebration,” says former Col. Ken Brown. “But this is by far the biggest one.”

Brown has wrangled in demonstrators and speakers from across the U.S., mostly in the southeast, yet still from impressive distances. From Arizona to Georgia, he has brought together a myriad of differently themed presenters, patch-working them together to display a full picture of U.S. war veterans.

For the past three years, Brown has been tasked with developing and growing the event. “Mayor Townson and John Riley came to me and asked me to help coordinate this event,” Brown said.

The event has grown each of the past three years. This year’s celebration will be the biggest one yet, thanks to Brown’s desire to see the event grow, and the fact that this year is the 50th Anniversary of the start of the Vietnam War.

Brown works on securing funding for the event through state and federal organizations, while John Riley pursues businesses’ funding. The event this Saturday is free to attend, and will be packed with activities and information from the Civil War to the Vietnam War. Organizations are bringing planes from WWI, WWII, and the Vietnam Helicopter Pilots Association is providing a helicopter that will be on display.

Most of the event will be held at Sportsman Lake Park, but there will be flight displays at the Cullman County Airport, and the crown jewel of planes that will be zipping through the air is a P-51 Mustang from WWII.

There will also be a speaker who spent five-and-a-half years as a prisoner of war at the “Hanoi Hilton,” as it is so lovingly referred to by those who know of it. If you don’t know it, Google it; let’s just say there was no continental breakfast.

This day is one that America sets aside to proudly celebrate and think of the valiant men and women who selflessly serve others in the most sacrificial manner possible: with their own lives. What former Col. Brown is doing is making it a more hospitable event so that more people will attend and hopefully leave being more thoughtful of those who have served the U.S.

On Saturday, the members of the Elk’s Lodge will be preparing a lunch for veterans and their spouses. Johnny’s Bar-B-Q will be available for purchase for anyone not a veteran or the husband or wife of one.

The Wallace State Jazz Band will be playing music, as they have for past Veteran’s Day events, and a new musical guest, Cullman’s Round Two. Brown also wanted to make sure that everyone knows, even if it rains, there will still be the celebration.

“We’ll have it at the VFW post by the Christian Bookstore,” Brown said.

There will be fun and food and plenty of information regarding any of the wars represented by organizations in attendance.

The organization Sons of Confederate Veterans will have members at the event and give a demonstration of the weapons and equipment used in the Civil War, and a former U.S. military member who actually flew into Normandy on D-Day in 1944 will be at the event, so those who want to may speak with him to find out what it was really like to be a part of what Winston Churchill said was “much the greatest thing we ever have attempted.”