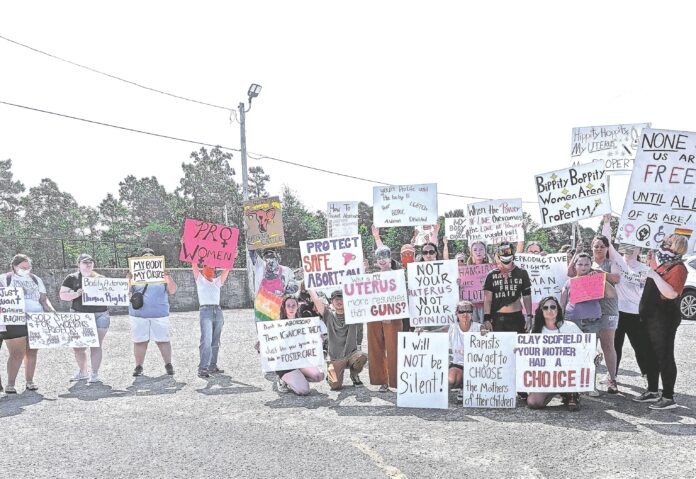 CULLMAN, Ala. – Upon arriving at the Cullman County Courthouse parking lot Monday morning, potential protesters had their plans to demonstrate thwarted due to their lack of preparation in obtaining the necessary permits.

Organized by Alabama Rally Against Injustice, the local demonstration was one of eight planned across the state Monday to protest the overturning of the landmark 1973 Roe v. Wade ruling, which guaranteed a woman’s constitutional right to an abortion. The ruling was overturned by the United States Supreme Court on June 24, giving states the power to ban abortions.

While no representatives from the organization were in attendance, resident Tabatha House shared her reason for being at the courthouse on the Fourth of July.

“We were here because the rights of women have been taken away, the rights to live freely. Now, it’s about the rights of anybody who has anything different about them. Roe was a law that rescinded a lot of laws,” said House. “I’m here to let people know that Roe isn’t just about women who supposedly can’t keep their legs shut and get an abortion. Roe took away a lot more than just the right to have an abortion at will. It took away our bodily autonomy.”

Due to the lack of permit application by the organization, the group chose not to protest.

Cullman County Sheriff Matt Gentry explained, “There was a group that was starting to come out earlier this morning. (Cullman Police) Chief (Kenny) Culpepper and I met with them. The chief explained the city ordinance and the process of obtaining the permit.”

Gentry continued, “If the permit was granted, we explained that, if they wanted to do it here at the county courthouse, they would then have to go to (Commission) Chairman (Jeff) Clemons and the Cullman County Commission and speak to them about holding the event here. They would do the appropriate paperwork and they would have it on the agenda at the commission meeting and vote on it there.”

Article VII, Sec. 48-191. in the City of Cullman Code of Ordinances reads, “It shall be unlawful to promote, organize or hold, or to assist in organizing or holding, or to take part or participate in, any parade or procession or other demonstration in the streets or other public ways of the city, unless a permit therefor has been secured from the city council.”

“They’re saying that we have to have a permit. I told them we’d stay on the public sidewalk, and he said, if we were on the courthouse property, it was a county issue and, if we were on the sidewalk, it was a City issue. We can’t go to the county because we need a permit. We can’t go to the public park because we still need a permit,” she said. “What about the teenagers that gather at Wal-Mart every night? Do they have a permit every time? They’re out there blaring their music and revving their trucks.”

Culpepper said he explained the process of obtaining a permit to Casey. “We told them that there’s a council meeting on Thursday and that I would stand up and support their right for freedom of speech,” he said. “All they need to do is come for the council and I’ll endorse them getting a permit to do their protest. At that point we’ll help them and protect them.”

In the wake of the killing of George Floyd by a Minneapolis police officer in May 2020, weekly protests were held in Cullman where demonstrators carried signs reading “Black Lives Matter” and “Respect Existence or Expect Resistance.” These protestors were protected and supported by local law enforcement due to their obtainment of a permit which was approved by the city council.

“To secure such permit, written application shall be made to the city council, setting forth the hour and date, the probable number of persons, vehicles, and animals which will be engaged in such parade, procession or other demonstration, the purpose for which it is to be held or had, and the streets or other public ways over, along or in which it is desired to have or hold such parade, procession or demonstration. The city council shall grant a written permit for such parade, procession or demonstration, prescribing the streets or other public ways which may be used therefor, unless in its judgment the public welfare, peace, safety, health, decency, good order, morals or convenience require that it be refused. It shall be unlawful to use for such purposes at the hour and on the date requested, any other street or public way than those set out in the permit.”

Gathering under the shade trees at Depot Park, the participants took turns at the microphone sharing their relevant experiences and supporting one another in their respective journeys. The group plans to complete its special events permit application this week and have it heard before city council at Thursday night’s meeting.

The special events permit for the City of Cullman can be found online at https://tinyurl.com/citypermit.